UPDATES ABOUT HEBREW COLLEGE'S RESPONSE TO CORONAVIRUS & TORAH FOR THIS MOMENT

April 20, 2020 ONLINE WEBINAR: Before the War’s End: The Complex Story of the Liberation of Bergen-Belsen

Join us for an online webinar with All the Horrors of War author Bernice Lerner. Lerner will discuss how she went about unearthing the journeys of Rachel Genuth (her mother) and Brigadier H. L. Glyn Hughes, who spearheaded relief efforts at Bergen-Belsen. Outlining the structure of All the Horrors of War, she will relay how her protagonists converged in the notorious concentration camp, as well as astounding, little known facts about the greatest liberation of the Second World War. 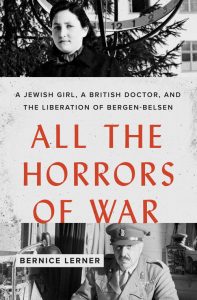 On April 15, 1945, Brigadier H. L. Glyn Hughes entered Bergen-Belsen for the first time. Waiting for him were 10,000 unburied corpses and 60,000 living prisoners, starving and sick. One month earlier, 15-year-old Rachel Genuth arrived at Bergen-Belsen; deported with her family from Sighet, Transylvania, in May of 1944, Rachel had by then already endured Auschwitz, the Christianstadt labor camp, and a forced march through the Sudetenland. In All the Horrors of War, Bernice Lerner follows both Hughes and Genuth as they move across Europe toward Bergen-Belsen in the final, brutal year of World War II.

The book begins at the end: with Hughes’s searing testimony at the September 1945 trial of Josef Kramer, commandant of Bergen-Belsen, along with forty-four SS (Schutzstaffel) members and guards. “I have been a doctor for thirty years and seen all the horrors of war,” Hughes said, “but I have never seen anything to touch it.” The narrative then jumps back to the spring of 1944, following both Hughes and Rachel as they navigate their respective forms of wartime hell until confronting the worst: Christianstadt’s prisoners, including Rachel, are deposited in Bergen-Belsen, and the British Second Army, having finally breached the fortress of Germany, assumes control of the ghastly camp after a negotiated surrender. Though they never met, it was Hughes’s commitment to helping as many prisoners as possible that saved Rachel’s life. 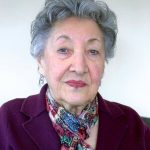 Bernice’s mother, Ruth Mermelstein (née Rachel Genuth), is a speaker for the Holocaust Memorial and Tolerance Center (HMTC) of Nassau County. Her story not only raises awareness of the dangers of hatred and prejudice, but also inspires young people of all backgrounds. (Ruth is a living example of how it is possible to meet life with hope after enduring extreme hardship and trauma as a young girl.) As of the winter of 2020, Ruth has addressed more than 250 school and other groups. You can read about the HMTC and Ruth here. And see her here, in Newsday, in a piece commemorating the 75th anniversary of the liberation of Auschwitz. In All the Horrors of War you can learn how she navigated the extreme, was saved by the British Second Army, and suffered repeated setbacks while gradually forging a new life. 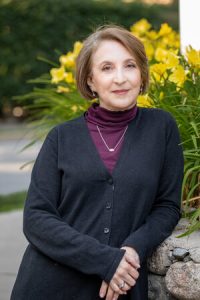 Dr. Bernice Lerner is the author of All the Horrors of War, The Triumph of Wounded Souls, and a coeditor of Happiness and Virtue Beyond East and West: Toward a New Global Responsibility. She is a senior scholar at Boston University’s Center for Character and Social Responsibility and the former dean of adult learning at Hebrew College. Learn more about Bernice.

Online
Back To EventsNext Event