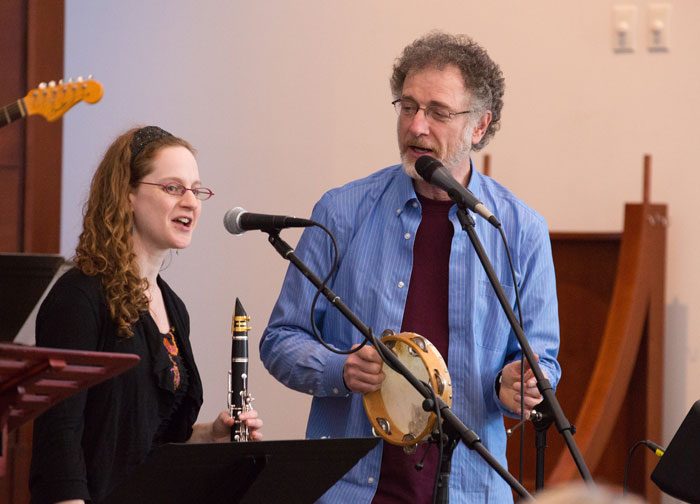 As a cantorial student at Hebrew College, Becky Khitrik Can`14 studied religious school music, Reform repertoire, and guitar with American Jewish folk music icon Cantor Jeff Klepper. But she never imagined she would follow in his footsteps as a Reform cantor.

Klepper, whose music is strongly influenced by Pete Seeger, has been hailed as a “pioneer,” for changing the sound of American synagogue music. A graduate of the School of Sacred Music at Hebrew Union College and member of the popular singing duo Kol B’Seder, he was one of the first cantors to use a guitar in Jewish worship, and his compositions, including Shalom Rav, are known throughout the Jewish world.

Khitrik is a soft-spoken intellectual and klezmer clarinetist who came to Hebrew College with a bachelor of the arts degree in music and religious studies from Macalester College, a certificate of study from the Zoltán Kodály Institute in Hungary, and a master’s degree of the arts in religion from the Yale Institute of Sacred Music. She chose to complete a master’s degree in Jewish Studies rather than a Masters in Jewish Education from Hebrew College so she could lean more deeply into texts. She had taught herself guitar, but had never taken a lesson until she met Klepper.

While the two arrived at the cantorate from different places, their passion for music and the pluralistic environment of Hebrew College brought them together. And made it possible for Khitrik, who also now teaches in the COSEL (Cantorial Ordination for Spiritual and Educational Leadership Program) at Hebrew College, to step into her teacher’s shoes, as Cantor of Temple Sinai of Sharon.

“It’s not simply passing the torch, it’s passing the torch to one of my students. I can’t imagine a more poetic kind of relationship,” says Klepper, who is retiring after 18 years at Temple Sinai and 18 years at a congregation in Evanson, Ill. “Becky can move people simply with the sound of her voice. She’s a delight to work with and to listen to, and she’s a wonderful teacher.”

Klepper hired Khitrik as the choir director and assistant cantor at Temple Sinai in 2015, remembering that she stood out as a cantorial student. Since then, he said, his congregation has “fallen in love with her.” So when he announced his retirement, he knew she would be the best person to succeed him.

Khitrik, who is originally from Bethesda, Md., and lives in Watertown with her husband and 16-month-old son, says the pluralistic training at Hebrew College, along with Klepper’s continued mentorship, prepared her for her new role.

“The School of Jewish Music at Hebrew College did a phenomenal job of giving me a well rounded training as a cantor, preparing me to work in a lot of different settings. I got trained not just in synagogue music, nusach, and cantillation, but also in pastoral care and text studies,” she said. “And having had classes with Jeff helped prepare me for stepping into the Temple Sinai community, knowing what they’re used to, understanding the culture that he has created. I feel like I’ve really been welcomed with such warmth in the past four years. I’ve felt very held in a way that makes me want to give back to them.”

Klepper, who lives in West Roxbury with his family, will remain involved in Temple Sinai as Cantor Emeritus. He will celebrate his retirement the weekend of April 26-27, and on May 5, he will sing alongside Khitrik and other Hebrew College and Temple Sinai-affiliated cantors, including Hebrew College School of Jewish Music Dean Cantor Brian Mayor of Temple Emanu-El in Providence, School of Jewish Music Associate Dean Cantor Louise Treitman, and Cantor Robbie Solomon, accompanied by Amy Lieberman, conductor of Hebrew College’s choir, Kol Arev, at a special concert entitled “From Generation to Generation.”

Both will also continue teaching at Hebrew College.

“I feel very close to Hebrew College, to the idea of training cantors for a post-denominational future, and to the mission of our School of Jewish Music, which I think is vital to the preservation of Jewish music tradition,” said Klepper.