Parenting From Generation to Generation: Becoming the Grandparents We Hope To Be 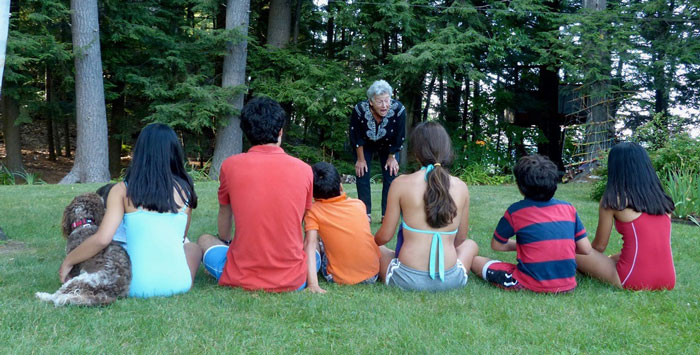 Many Jews of my generation grew up without grandparents: perhaps they perished in the Holocaust, stayed behind in the old country, or died young. Those of us who knew their grandparents may have an image in mind of a time and place in which families lived close to one another and grandparents were free to spend much of their time doting on grandchildren. No wonder so many of us are confused about how to be a good Jewish grandparent!

Luckily, Hebrew College has come to the rescue! Last summer, I was part of a group of educators in the fields of parenting and Jewish thought who came together to develop a course entitled Grandparenting Through a Jewish Lens. The program addresses modern-day issues faced by American Jewish grandparents such as: intermarriage, long distance grandparenting, and cultivating good relationships with our grandchildren, adult children, and their partners.  The collaborative process of creating this curriculum was intellectually stimulating and lots of fun, with each member of the team bringing her own expertise to the project.

This spring I had the opportunity to facilitate the brand-new Grandparenting Through a Jewish Lens at Temple Emanuel in Newton. Using text and a discussion format, we examined how our roles as grandparents continue to evolve and grow along with our grandchildren. In the first session, we discussed our own experiences, from reflecting on our relationships (or lack thereof) with our own grandparents, to the process by which our grandparent titles were chosen (some of us chose the names ourselves while others were “annointed” by children or grandchildren). In our fourth and final session, we began discerning what of our heritage we each hoped to instill in the next generation. We had the opportunity to identify the Jewish values we wish to pass on to our grandchildren. Throughout the course, we shared our joys and disappointments in an intimate setting in which participants felt comfortable and safe talking about their personal experiences.

Grandparenting isn’t new. Any problem which arises has been written about in Jewish tradition. Grandparenting Through a Jewish Lens uses wisdom found in our ancient repertoire, including the Torah, the Talmud and various folk stories, to gain insight. We learned that Jacob blessed his grandsons who were brought up in another culture; that the Baal Shem Tov, founder of Hasidism tells a distraught father whose child has stopped observing Jewish ritual to love him more. Sage advice on navigating differences and building connection abounds in our tradition.

While the curriculum provides many opportunities to immerse ourselves in thoughtful reflection on a variety of topics, the real depth came from the conversations we had as a class. We all realized how much we could learn from each other. Since no grandparent can truly imagine this experience until it begins, it’s so valuable to share with each other and learn from those who have gone before us. Speaking with people in different stages of their grandparenting journey — from newborn to adult — also lent each of us insight we could not have gained otherwise.

Just as it took us years to learn how to parent, so too will it take years for us to become our “best selves” as grandparents. In the end, sharing our stories and doing a lot of listening can go a long way in helping us build good relationships over time with our children and grandchildren.

Genesis Life in a Spiral

News Highlights The Christian Century:
“Judaism for the World is the work of a master”