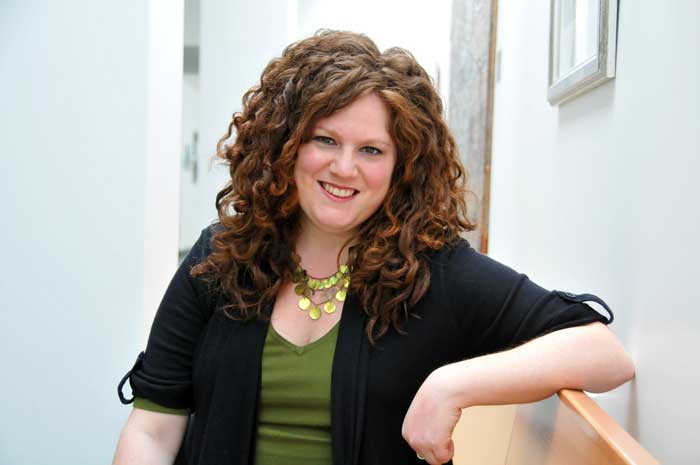 As a child in Long Island, NY Margot Meitner planned to be the first Jewish female supreme court justice.

The grandchild of Holocaust survivors, Margot wanted to study law so she could help oppressed and marginalized people, indulge her passion for public speaking and her love of learning, and make a difference in the world.

But after Ruth Bader Ginsburg was appointed to the Supreme Court in 1993, young Margot decided on a new career plan: Rabbi.

“I grew up with really strong rabbinic role models who had deep connections to social justice movements, and I felt really empowered from a young age as a leader in my synagogue,” said Rabbi Meitner, who grew up in Queens and Great Neck, N.Y. “It felt like the rabbinate encapsulated all of the things I wanted to do: social justice work, teaching, lifelong learning, counseling, study of law, public speaking, and being able to be present for people at important life cycle moments.”

Meitner assumed she would go straight to rabbinical school after college, but at Yale University, she realized she wasn’t quite ready – yet. First, she wanted to have more experiences working directly with underserved, oppressed, and marginalized populations. And she wanted tools to be able to do deep pastoral counseling once she became a rabbi. She decided to pursue a career as a social worker.

“I had been in a very privileged environment and then I got exposed to a bigger world and to more ideas, to ideas of critical theory, and power analysis, and I felt humbled in a certain way, and called to places of immediate need,” she said. “So I put being a rabbi on the back burner. My 22-year old self said, ‘I’ll do that as a second career… when I’m 50.’ That seemed like a good age.”

Meitner received a B.A. in Women’s and Gender Studies and History from Yale in 2000 and an M.S.W. from Smith College School for Social Work in 2003, and then spent several years working in community mental health in the San Francisco Bay Area. After working “in the trenches” with people who were homeless and on welfare, had mental health and substance abuse issues, and were in psychiatric crisis, she realized she needed to “balance some of the suffering with more simcha.” She decided that she didn’t want to wait until 50 to go to rabbinical school – she wanted to go immediately.

“I never wanted to leave my clinical work behind, I’ve always wanted to integrate those things, but I needed more balance,” she said. “I had a real yearning for deeper study and practice and also for more of my passions and skills to be utilized in my work than they had been.”

Meitner chose the newly-founded Rabbinical School at Hebrew College, where her Hillel rabbi and mentor from Yale, Rabbi Sharon Cohen Anisfeld, had recently become Dean. Meitner had been raised in the Reform Movement with non-observant parents, but in California, had started exploring different types of Judaism and aspects of Jewish observance. She had already taken advantage of all of the Jewish adult learning options in the Bay Area and wanted to immerse herself in a deep level of text study.

“Hebrew College really spoke to me on a soul level. And I couldn’t really imagine myself happy anywhere else,” she said. “I wanted to go deep and didn’t want to be limited by any one denomination. I wanted to be part of a movement of people who were trying to breathe new life into Jewish traditions.”

Because of her family’s history of oppression, Meitner had always felt committed with engaging with populations “on the margins.” She grew up queer with a lesbian rabbi, and after college, worked on a project about racial and ethnic diversity for the Institute for Jewish and Community Research, where she “saw a broader vision of what Jewish community could be” than she had experienced before. She wanted to bring that vision to her rabbinate.

“Having had the great fortune of growing up with one of the first out lesbian rabbis, I didn’t have to reconcile my Judaism with my queerness,” she said. “But so many queer people have to do that because they are told there is no place for queerness in religion. It was so important for me to be able to offer that experience of integrated identity to other people. And to help people take claim in their Judaism.”

Since receiving her rabbinic ordination and Masters in Jewish Studies from Hebrew College, Meitner has been integrating her clinical and rabbinic backgrounds to accompany people on their journeys toward emotional and spiritual health. She says people come to her as a therapist because she is a rabbi – whether they are Jewish or not. And she believes in the power of both psychotherapy and ritual to create change and inspire healing in people’s lives.

She also brings her clinical skills to her rabbinical work, helping families navigate important moments in their lives. And she remains committed to serving traditionally marginalized communities, including people of color, queer and transgender/gender non-conforming people, and people with disabilities.

“I approach people’s stories as sacred texts now,” she said. “There’s a different set of listening skills and words and language and questions that, having been immersed in Jewish learning for so long, informs how I approach the sacred texts of the lives of the people that I work with. I’m able to bring a spiritual and Jewish lens to the work that I do in a deeper and more integrated way.”

Meitner has had a private practice in Boston since Rabbinical school. She has also served as rabbi of Congregation Agudas Achim in Attleboro, Mass., as a Rabbinic Advisor at Harvard Hillel, and as a rabbinical intern at Congregation Beit Simchat Torah in New York, and completed chaplaincy training at Hebrew Senior Life in Boston. She currently serves on the Adult Learning faculty of Hebrew College and will join the Rabbinical School faculty next fall, teaching pastoral care.

Meitner says she continues to feel enriched by her Hebrew College experience and looks forward to sharing her story – of coming out to her Holocaust-surviving grandmother – at Hebrew College Live! Stories in Honor of Our Teachers on May 30.

“The school was invested in nourishing my soul,” she said. “The way that I experienced community with my classmates and the tight bonds that we formed – and the ways the teachers modeled that for us – was integral to my experience. I’m so grateful to be able to take even just a small piece of the specialness of Hebrew College and bring it out to other places.”

Learn more about the Rabbinical School of Hebrew College