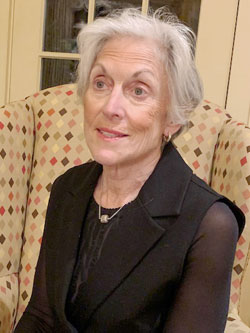 It’s not unusual to find Deborah Feinstein hanging artwork in Hebrew College’s Ted Cutler Atrium; joining a Zoom call to contribute a creative idea for a Hebrew College event; or connecting and inspiring community members with the College’s offerings. It is who she is and how she shows her love for Hebrew College and its mission, “Reimagining Jewish learning and leadership for an interconnected world.”

During this centennial year of the College, which will be celebrated on June 2 at the spring gala “Remember. Renew. Reimagine,” the Hebrew College community will have the opportunity to honor Feinstein for her dedication and pioneering work that indeed has “renewed” and helped “reimagine” the College for the next 100 years. Among the many new initiatives that Feinstein has spearheaded are launching the Hebrew College Arts Initiative, which has transformed Hebrew College’s hallways into Torah-inspired gallery space; and establishing the Living Legacy Society with the partnership of Rabbi Van Lanckton and Dan Miller to support the education of future Jewish leaders and learners. She is also a member of the inaugural cohort of the Hebrew College-Jewish Arts Collabroative Artist Beit Midrash; and serves as a creative and instrumental voice on the Hebrew College Board of Trustees, College event committees, and more.

“Deb is one of the greatest lovers of Torah I know. She has been studying faithfully and consistently for years, and yet, like the true artist she is, she encounters Torah anew in every moment,” said Hebrew College President Rabbi Sharon Cohen Anisfeld. “Deb’s devotion to learning, to the arts, to the College’s Living Legacy Society all flow from the same source: her deep love of Torah and her desire to be a part of making Torah come alive—whether through words, deeds, or her own visual artwork—in our own time and for generations to come. It is a privilege and a joy to know her, to work with her, and to study Torah with her, and we are so blessed by her leadership at Hebrew College,”

As a former curator and museum director, creating a gallery space for Hebrew College was something near and dear to Feinstein’s heart. In 2019, she served as the founding chair of the Hebrew College Arts Committee, which, in 2021, launched the Hebrew College Arts Initiative. The initiative selects artists whose work focuses on creative dialogue with Jewish texts for display at the College, enabling artists to share visual interpretations of Torah and community members to learn in new and different ways. In the past two years, Feinstein consulted on two exhibits: “Faith in Isolation Expressed,” a pandemic-inspired interfaith photography show curated by Brenda Bancel, and “Seeing Torah,” a visual diary documenting artist Anita Rabinoff-Goldman’s study and artistic response to each of the 54 portions of the Torah.

“When you get involved in something as a volunteer, it’s important to find a place where you can best make a difference for the non-profit, as well as for yourself,” she said. “I’m a curator and a museum director, that’s how I can use my skills and expertise to help the College move forward. I’m proud of what we have accomplished through the Arts Initiative, of how many new learners we have brought into the Hebrew College building.”

Feinstein served as a museum director and educator for over 25 years, including as Director and Curator of the Holyoke Museum in Holyoke, Mass., and as an educational consultant for exhibits at the Springfield Museum of Art in Springfield, Mass. She also holds a graduate degree in Islamic art and has lectured on religious, historical, and cultural connections of the three major religions through the visual arts at numerous universities and museums.

Now Feinstein is preparing an artistic celebration to honor the 100th birthday of Hebrew College, also entitled “Remember. Renew. Reimagine,” which opened on April 3. The exhibit, which celebrates artistic voices, images, and expressions inspired by Torah, includes pieces from the Hebrew College’s permanent collection, as well as contemporary creative expressions on Torah and Jewish identity.

Feinstein’s ties to the Greater Jewish community also run deep. In addition to her work with Hebrew College, she served as president of the Board of Directors for the Vilna Shul for five years, chair of Vilna’s capital campaign that raised $4 million for its renovation, co-chair of numerous USHMM missions in Europe, co-chairperson for the Wings of Memory Society of New England for the USHMM, and member of many committees at Temple Beth Elohim in Wellesley, Mass.

“I have had the privilege of knowing Deb for years and have been inspired watching her in action. She is a dedicated and true partner in every sense, and I feel very lucky to work closely with her,” Franck said. “With an open heart, she devotes her talents, her time, and her passion to things she believes in and knows are important. The community is strengthened by all she brings into the world.”

Join us! Hebrew College’s hybrid Centennial Celebration will take place on June 2, 2022 with options to attend in person at Temple Beth Elohim in Wellesley, Mass. or online. For reservations and tributes, click here.