I was first drawn to the Jewish wonders of Vilna (Vilnius, Lithuania) when I traveled — armchair style — with historian Lucy Dawidowicz, who had ventured there from New York City by ship and train in August 1938. Dawidowicz was 23 years old when she made that trip. I must have been about the same age, give or take, when I read about it. And I was curious. What made this young American sail the wrong way? How did she get out in time? Whom did she leave behind? I dove into Dawidowicz’s memoir, From that Time and Place (W.W. Norton, 1989) and, walking the city streets vicariously, discovered a Yiddish-speaking universe: poets, secular scholars of Yiddish, religious scholars of Torah and Talmud, communists, Polish nationalists, musicians, Jewish teens looking for no more than a good time. And on and on.

I was most surprised to learn of the high level and vast scope of the activities of YIVO, the academic institute devoted to scholarly study of Yiddish language and culture where Dawidowicz was a research fellow for the year. As a Jewish child of the 1970s and 1980s, the notion that American Jews of Eastern European descent could, once-upon-a-time, like our Irish or Italian neighbors, go back to where our parents and grandparents had come from to study our language and our literature, that “the Old Country” had existed as a living, vital place at the same time as Jews crowded on the Lower East Side — was simply mind-blowing. Studying the Holocaust interested me much less than it did some of my friends of a similar historical bent. Instead, I found through Dawidowicz the history that I sought out: the LIFE of Jews before the destruction. The city of Vilna encapsulates that life in all its diversity and excitement. 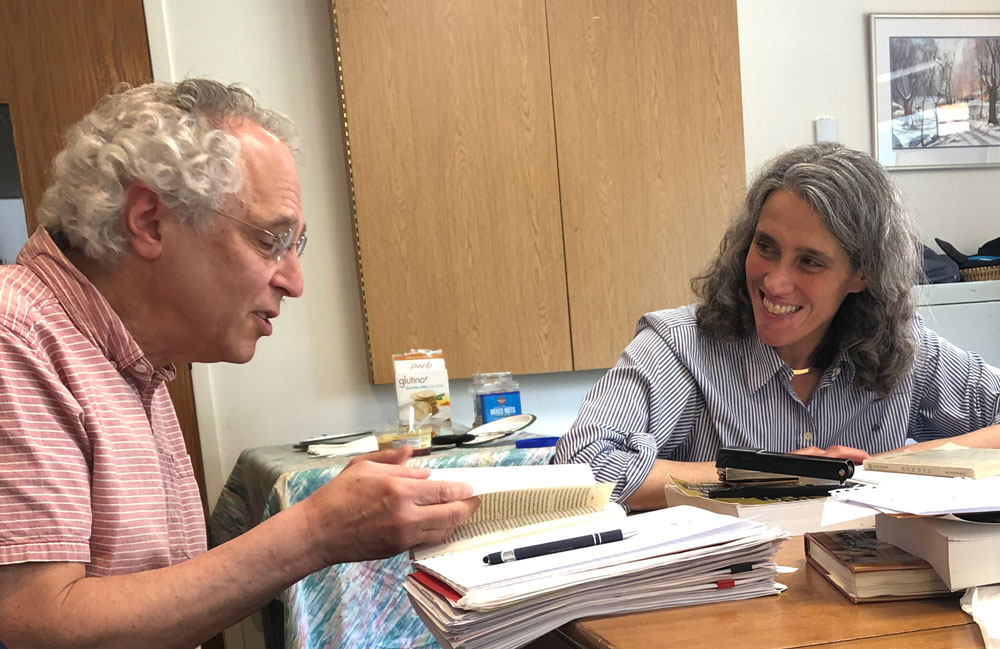 In the past year, I was introduced to the Vilna Shul, Boston’s Center for Jewish Culture, when I taught a Hebrew College Open Circle Jewish Learning class there. The Vilna is an inspiring institution, aspiring to be the center for Jewish life in downtown Boston. Located in the last immigrant-era synagogue building from the 1900s, the Vilna operates today as a cultural center that embraces Jewish identity and spirituality and its intersection with other cultures, and a museum that tells the history of Jewish immigration to Boston and the history of Boston’s West End.

The Vilna was built in 1919 by Jewish immigrants who called themselves Anshei Vilner or “the People of Vilnius,” and recently completed 15 months of renovations to make the building universally accessible and up-to-date with 21st Century technology. It is now welcoming to all people. The original congregation prayed actively at 18 Phillips Street until the 1950s and the last remaining member, Mendel Miller, held the final service in the building in 1985. The building sat idle until 1994, when it fell into a condemned state and was set for demolition to make way for parking. A group of Jewish philanthropists learned of this, rescued the building, and made the Vilna Shul into what it is today.

For this course at Boston’s Vilna, I have chosen six individuals through whom we can get a glimpse of various dimensions of the fascinating prism of the Old Country Vilna, to see diverse religious and secular aspects of this East European Jewish cultural center, and to consider what its legacy means for us today. Making choices was hard; there are so many aspects of Vilna that are worth our attention. I took care to balance women and men, religious and secular. Weekly biographies will include Rabbi Elijah ben Shelomo Zalman, “The Vilna Ga’on” (1720-1797), an extraordinary Talmudist and opponent of Hasidism; Devorah Romm, publisher and scion of a learned family of Hebrew-type printers (d. 1903); Max Weinreich (1894-1969), founder of YIVO, the first institute for academic study of Yiddish language and culture; author Chaim Grade (1910-1972), as a representative of the avant-garde Yiddish-language cultural movement called Yung Vilne; Rachela Pupko-Krinsky (1910-2002), who with Abba Kovner and others resisted Nazis in the Vilna ghetto; and, of course, Lucy Dawidowicz (1915-1990), the American-born literature student who sailed from New York to Vilna to study Yiddish language and culture in September 1938 and remained until August 1939.

At a time like today, when we as American Jews have experienced a small taste of the precariousness of Jewish existence that our European ancestors unfortunately lived daily, it is the perfect time to look closely at how, in the midst of all that danger, threat, hatred, they created vibrant Jewish culture and lived adamantly, proudly, richly Jewish lives. As the Vilna Shul returns to its renovated historic location in Beacon Hill, we will seize the opportunity to look, close-up, at Vilna of the Old Country, the “Great City of Israel, Jerusalem of Lithuania,” whose emigres founded this Boston synagogue a century ago. I am excited to embark on this virtual journey, and I hope you will be able to join me.

Rachel L. Greenblatt, PhD is an instructor in Hebrew College’s Open Circle Jewish Learning and Me’ah programs. She teaches at Dartmouth College, and has previously taught at Harvard and Wesleyan Universities. She holds a Ph.D. in Jewish History from the Hebrew University of Jerusalem, and B.A. in History from Cornell. She has also studied biblical and rabbinic text at the Pardes Institute and at Matan – the Sadie Rennert Women’s Institute for Torah Study, both in Jerusalem. Learn more about her winter Hebrew College Open Circle Jewish Learning course “Six Jews of Vilna” and register now.