Community Blog Inspired by her mentors 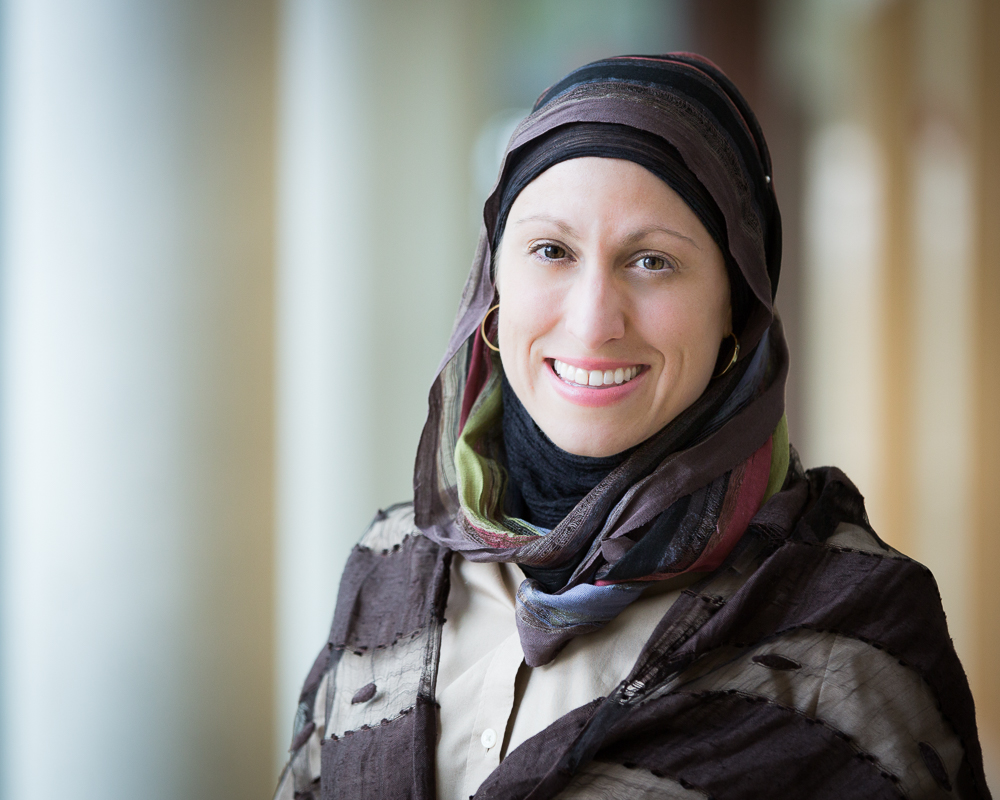 Celene Ibrahim met Rabbi Or Rose at a retreat for “emerging” Jewish and Muslim leaders. Rabbi Or was attending the retreat in the capacity of a mentor to the emerging leaders and taught a session on the biblical story of Jacob and Joseph, figures whose stories are also recounted in the Qur’an.

At the time, Celene was finishing her degree in divinity studies at Harvard Divinity School. Several months later, Or and his colleagues at Hebrew College were looking for a community leader and scholar within the Boston Muslim community for a new interfaith initiative. “It was a very fortuitous alignment of my interest and their needs,” said Ibrahim. “They had a strong vision and desire to expand beyond their Jewish and Christian niche.”

Celene initially ran a fellowship program for Muslim community leaders for two years and then, in 2014, joined an interreligious team spearheaded by Rabbi Rose and his colleague Dr. Jennifer Howe Peace from Andover Newton Theological School. Celene assumed a joint faculty position as Islamic Studies Scholar-in-Residence and became the Muslim Co-Director of the Center for Inter-religious and Communal Leadership Education, or CIRCLE — a nationally recognized program shared between Hebrew College and Andover Newton. When Hebrew College established the Betty Ann Greenbaum Miller Center for Interreligious Learning & Leadership in 2016, Celene became a member of the Center’s Advisory Council.

In the seven years since their initial meeting, it didn’t take long for Or to become a mentor and good friend to Celene. “I so admire Or’s skillful diplomacy between faith communities, his ability to sit with ambiguity with such delight,” she said. “He maintains this balance of humility, courage, and humor while simultaneously being really present in difficult situations. He has a real conviction that a better world, that a better America, is possible. And he believes that individuals can make a profound social impact — that our striving isn’t in vain.”

“Martin Luther King, Jr. says that the arc of the moral universe is long, but it bends towards justice. Or believes that,” she added. “And yet, he’s wide awake to all of the challenges opposing that dream and the fact that if we want to witness the moral arc bending, we must do our part as individuals, against the odds.”

Ibrahim has had strong mentors throughout her life. She was headed toward a likely career in finance or medicine when, she says, “I was inspired in a way I wasn’t expecting by a world religions teacher.”

At the time, she was a student at the United World College of the American West in New Mexico, an international boarding school focused on peace making, cross-cultural encounters, and social justice issue. She had grown up in a homogenous white Christian community in the Poconos of Pennsylvania, and moved to the multi-cultural, multi-religious program for her last two years of high school.

“In that exposure to a microcosm of the world cultures and peoples, I had an opportunity to think deeply about who I was and who I wanted to be,” said Ibrahim. “New Mexico is called the ‘land of enchantment,’ and I found it to be very enchanting. In the course of two years living there, I met so many extraordinary people.”

One of those people was a teacher who had gone to West Point and, on his own spiritual journey, found Buddhism and become a monk. “He took our world religions class all around New Mexico to these contemplative communities. We spent a lot of time at different monasteries and temples and retreat centers, where he encouraged us to think deeply and to be attuned to how we could integrate what we were witnessing into our own spiritual lives. I was able to experiment with all different types of spirituality. It simultaneously coincided with a time in life where I was also thinking a lot about vocation and essential questions of the meaning and purpose of life,” she said.

She became more deeply grounded in Islam later, when studying abroad in Egypt during her sophomore year at Princeton University. Through a class at the American University of Cairo, she developed an affinity for the works of Persian Sufi masters. She also fell in love with an Egyptian. She put classes at Princeton on hold to study longer in Egypt, and decided to convert to Islam.

“The legacy of the Prophet Muhammad, peace be upon him, was so vivid and brilliant; reading through thousands upon thousands of sayings passed down from him and about him awakened my desire to better understand his legacy,” she writes in her book, One Nation, Indivisible: Seeking Liberty and Justice from the Pulpit to the Streets, an anthology comprised of the wisdom of contemporary religious leaders, activists, and artists that was released earlier this year.

“I began to discover so much more than what had met my cursory glance in my previous world religion classes. Islam was the most personally inspiring religious and philosophical framework that I had encountered in all of my journeyings; the more I studied the Qur’anic revelations, the more the Qur’an would reveal itself. The religion was alive in people’s beings, and it made me alive too. Islam was an ocean, and I was thoroughly enjoying the plunge into learning.”

Plunge she did. Celene spent the next year in Egypt studying Arabic before returning to Princeton where she immersed herself in the study of Islam, earning a Bachelor’s degree with highest honors in Near Eastern Studies. She went on to become the first Muslim to earn a Master of Divinity degree from Harvard University with a focus in Islamic studies and religious leadership. She now also holds a Doctorate of Philosophy with a concentration in Arabic and Islamic Civilizations from Brandeis University, where she was the University’s first Ph.D. in that field. A revised version of her dissertation is forthcoming from Oxford University Press.

Ibrahim remains deeply committed to Islamic scholarship, to fostering interreligious learning environments, and to civic activism. She thinks this work is especially important “when we’re in a moment at America that the very foundations of our multicultural, multireligious, multiethnic, our pluralist society, are being challenged in ways that call out for inspiring religious and civic leadership,” she said.

“I really like being in a field where my work is so closely aligned with how I understand my life’s purpose,” she said. “I basically see the cultivation of character, spiritual equanimity, the intellect and the capacity to be of service as central components to what makes life meaningful. And my job requires that I do those things. I find that gratifying.”

Ibrahim has also been the Muslim Chaplain at Tufts University for the past five years, where she offers mentorship and support to students and coordinates programs related to Muslim life. She is now finishing up her position at Tufts and accepted a position as a world religions teacher at the internationally-recognized Groton School in Groton, Mass. She will also continue her affiliation with Hebrew College, where, she says, she feels privileged to work with Or and to be a part of and witness impactful and urgent work.

“The Miller Center is doing groundbreaking work in the field, and their impact is profound at Hebrew College, locally here in Boston, and at the national level,” she said. “When you’re a spiritual leader and educator, people are looking to you for help figuring out their own answers to existential questions. In this role, you have to always elevate your own ability to, hopefully, tap into some wisdom; it helps when you have a community of other religious leaders to draw upon for inspiration and support.” This, for Celene, is one of the direct benefits to being involved with the Miller Center.

“It is very inspiring to see a model for rabbinical education at Hebrew College that is simultaneously very deep and grounded in ancient texts and practices and yet profoundly responsive to our contemporary social needs and the pressing issues of our time,” she added. “I was lucky to have worked with many student in this year’s graduating class, and I feel so much more confident for the future of Jewish-Muslim relations knowing that these individuals are going to be in congregations and organizations that are shaping the future of Jewish and interfaith life in America and beyond.”

Ibrahim will be dedicating her story at Hebrew College’s spring fundraiser Hebrew College Live! Stories in Honor of Our Teachers to Rabbi Rose. She hopes the story will underscore the transformative work that Hebrew College is doing as an institution.

“Hebrew College’s strength is that its mission is very clear and focused on training rabbis, cantors, and Jewish educators —  and yet the impact and relevance goes so far beyond just the Jewish community. I think that’s a model for how we have to position ourselves as institutions with deeply held religious convictions — we must hold tight to our convictions. We’re strong because we’re rooted in them, but our vision must be broader and much more expansive and inclusive.”

Visit the Hebrew College Live! website for information about tickets and gifts in honor of a treasured teacher.