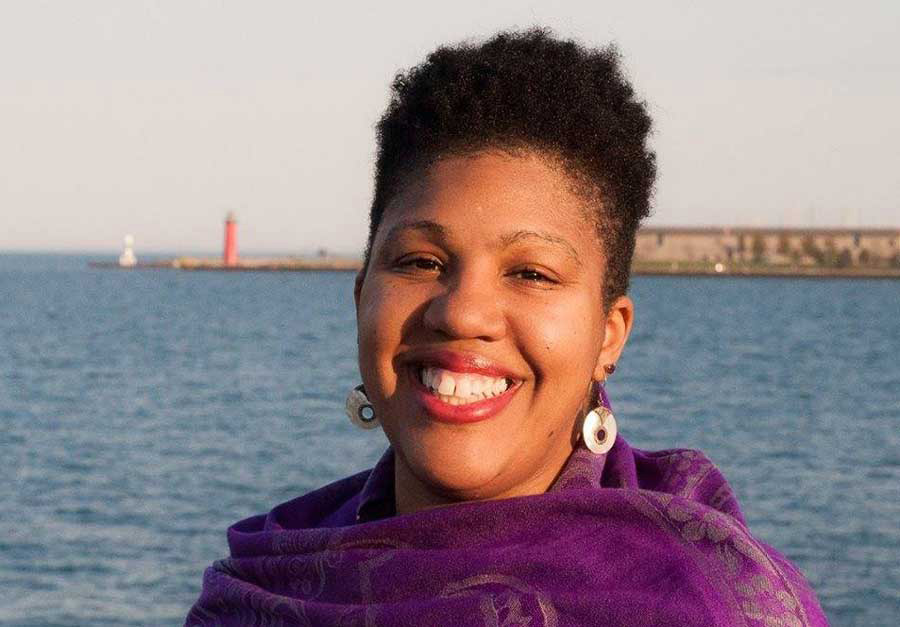 She began observing Shabbat when she was 11 — because she thought it made sense to rest on Saturday and work or shop on Sundays — and she could never understand why her Catholic school teachers told Bible stories out of order. She also developed her own system of kashrut.

But she didn’t realize that she was following Jewish practices until she was 20 and an undergraduate at Tufts University in Medford, MA, when she went to Harvard Hillel with her then-boyfriend — a non-observant Jew — to say Kaddish.

“I was already living a Jewish life. I just didn’t have that language when I was younger,” she said. “And then I discovered Judaism as an adult, and everything I was looking to do or doing was being done — like reading the Torah in order instead of bopping all over the place, and having services on Friday nights and Saturday mornings, and having a quiet reflective experience through the Amidah. I thought, ‘These people do the same things as I do!’ I called my mom and said, ‘I think I’m Jewish. She responded, ‘We always knew you were Jewish!'”

Rabbi Berenbaum, a Brookline native who lived at the time in Hyde Park, took on a second major, Judaic studies — in addition to clinical psychology — and converted to Judaism through Temple Shalom at the Blue Hills. After graduating from Tufts, she taught Hebrew School at Kesher in Cambridge. A few years later, she applied to Hebrew College.

“Hebrew College was such a logical place for me because of its non denominational approach,” Rabbi Berenbaum added. “My whole Jewish Journey had been non denominational up until that point. I really valued that aspect because it allowed me to learn with teachers and students from a variety of perspectives. There was no dogma. There was nothing I had to believe and no box I had to check. I just had this Jewish experience and Jewish education, and I really appreciated that.”

Rabbi Berenbaum had been praying to God and writing her own sermons since childhood. After converting, she realized she wanted to follow in her rabbis’ footsteps. She loved Judaism and was committed to helping others find the magic that she had.

“I went to rabbinical school because a lot of rabbis told me I should be a rabbi,” she said. “I thought Judaism was just the most amazing thing, but I would run into adult Jews who had no idea about anything because they stopped learning at their b’nei mitzvah. I said, ‘I’m going to find ways to give people back their heritage so they can have ownership over it.’ So many people are looking for something meaningful in other traditions or out in the world. Judaism has so much to offer.”

Rabbi Berenbaum spent the summers of Rabbinical School in the New England Berkshires living, growing, teaching and serving at the Isabella Freedman Jewish Retreat Center. There she met her husband, Joel, an outdoor educator, photographer, and master Torah trope instructor, who is now completing his masters degree in special education. They have a 2-year-old daughter, Galya.

After ordination, Rabbi Tiferet spent four years at Congregation Shir Hadash, a Reconstructionist congregation in Milwaukee, Wis. She has been at Temple Har Zion in Mt. Holly, N.J. since 2017, and is moving back to Brookline this summer to serve as Director of Congregational Learning and Programming at Temple Beth Zion (TBZ) in Brookline, where she davened for 10 years before moving to Milwaukee.

She is also in the process joining the Reconstructionist Rabbinical Association, a move inspired by her time at a Reconstructionist synagogue, as well as all that she learned from her Hebrew College teachers, including Hebrew College Rector Rabbi Art Green, Hebrew College President Rabbi Sharon Cohen Anisfeld, Rabbi Allan Lehmann, and Rabbi Ebn Leader — all of whom emphasized the importance of social justice and creativity within Judaism.

She’s also looking forward to coming back to Boston next week to share her story — a story of the mitzvah of honoring her parents — with the Hebrew College community at Hebrew College Live! Stories in Honor of our Teachers.

“It’s really great and wonderful to be moving back because I love the community very much I have learned so much in life and really look forward to bringing all of my knowledge and experience back to Boston to help support the community and to keep it strong,” she said. “I’m really excited to share this story at Hebrew College’s fundraiser because I was often very quiet in rabbinical school. I’m not a big talker in general. I’m a listener and a processor. And I’m at a point where I feel like I can come back and say something with some sort of knowledge — I’m not going to say certainty.” “I am just really excited to be a part of this event,” she added. “I hope a lot of alumni and community members come out for this. I think it’s a really awesome opportunity to honor our teachers who have given so much to us — teaching us with their own life experiences. I think it’s valuable for everyone to hear and to celebrate.”

For information and tickets to Hebrew College Live!, visit the event website.