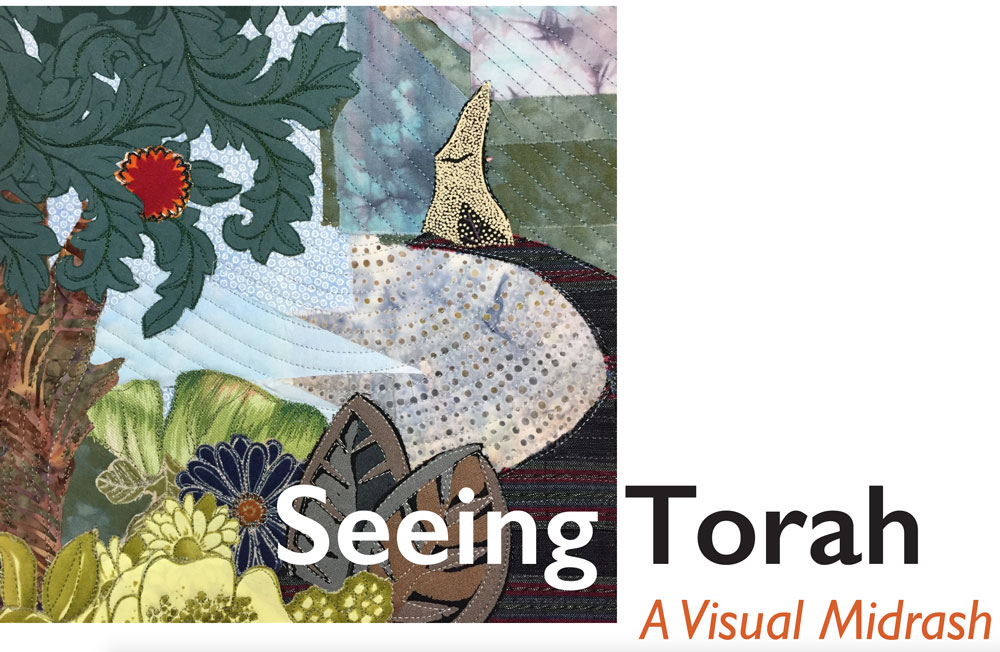 When completing her master’s program in Jewish Studies at Hebrew College, Deborah Feinstein explored Torah through art. A visual learner, she would complete her final exams with images, rather than essays, and then write explanations of her artwork.

Now, as an community learning student in Hebrew College President Rabbi Sharon Cohen Anisfeld’s Open Circle Jewish Learning class and a member of the Hebrew College Board of Trustees, Feinstein wants to bring that opportunity to other visual learners — enabling artists to share their visual interpretations of Torah and community members to learn in new and different ways through a gallery space in Hebrew College’s Cutler Atrium.

“I learn visually. I am not a textual learner. When I took my finals, a lot of my explanations came visually and through the visual came the textual,” said Feinstein, a former museum director, educator and curator. “Everybody has different ways of learning and different ways of interpreting knowledge. We want to enable artists to be able to share their personal expressions of Jewish texts, and to make those expressions available to the wider public, offering the community a way of learning Torah visually, as well as textually.”

Feinstein and several others — including Susan Schechter, Bette Ann Libby, and Rabbi Anisfeld — have formed a new Hebrew College Art Committee, which will select various artists whose work focuses on creative dialogue with Jewish texts for display in the Cutler Atrium. The first exhibit, which will run from March 24 through June 14, is “Seeing Torah,” a visual diary documenting artist Anita Rabinoff-Goldman’s study and artistic response to each of the 54 portions of the Torah over the cycle of a single Jewish year. There will be an opening reception on March 24, from 6 to 8 p.m., with refreshments and remarks from Rabbi Anisfeld and the artist.

Each of Rabinoff-Goldman’s 54 pieces will be accompanied by a short commentary, allowing viewers to consider how Torah can be a continuing source of learning and discourse, and reflect on what it means to them. There will also be community lunch-and-learn discussions in the gallery with rabbinical students about the image of each week representing the weekly parsha. The first meeting will be Tuesday, March 31, from 12 to 1 p.m. Participants are encouraged to bring their own lunch and to RSVP.

The Rabinoff-Goldman show follows an exhibit earlier this academic year featuring prints by Beatrice Wool z”l, who attended the Hebrew College High School (now Prozdor) through the 11th grade. As an artist, Wool based many of her prints on Biblical themes, including the days of creation, women and men in the Bible, holidays and scenes of Israel, as well as more secular prints.

“The walls were filled with vivid, beautiful, and poignant portrayals of biblical characters and themes — a kind of contemporary midrash,” Rabbi Anisfeld said, “With Deb Feinstein’s extraordinary leadership, we realized we could build on this to do something really significant in and for the community.”

The art committee will partner with different areas of the college and focus on bridging the academy and the community through the gallery exhibits and lunch-and-learn conversations. The fall exhibit, on interreligious engagement through art, will feature lunch conversations facilitated by the Miller Center for Interreligious Learning & Leadership. The committee hopes to bring three to four exhibits each year.

“Everybody interprets in different ways and creates in different ways, so we hope to showcase different artistic perspectives on Jewish texts,” she said. “We also believe this effort will bring new energy to the College as a pluralistic center for leadership, learning, community-building, and spiritual and cultural creativity.”

Join us for the opening of the Seeing Torah exhibit on March 24, from 6 to 8 p.m., at Hebrew College. Refreshments will be served. There will be remarks from Hebrew College President Sharon Cohen Anisfeld and artist Anita Rabinoff-Goldman. RSVP here. Interested in submitting work to the Hebrew College Cutler Atrium Gallery? Email arts@hebrewcollege.edu.