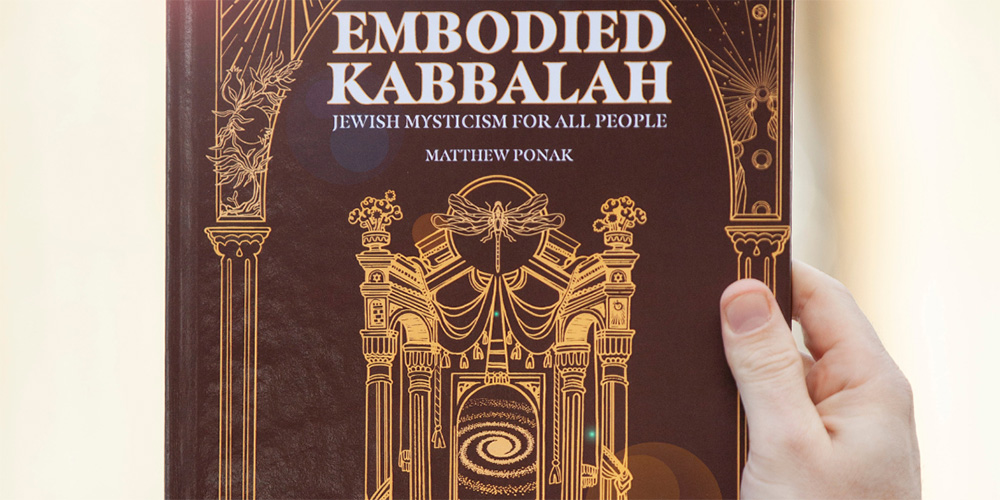 “I spent several years outside of the Jewish world because I thought the kind of spirituality that spoke most to me didn’t exist in Judaism,” said Rabbi Matthew Ponak `20, the author of the upcoming Embodied Kabbalah: Jewish Mysticism for All People. “When I first encountered the uncommon texts featured in my new book, it felt like coming home: I uncovered a Jewish language of embodied spirituality that had been there all along!” Ponak’s new book uses sources from Jewish mysticism to articulate a path of balance and the ability to maintain personal responsibility, social connectedness, and ethical living, while also having a deep relationship to the Divine. “This is a work that I would be happy to give to spiritual seekers, confident that they will find inspiration and illumination that is yet grounded and balanced,” said Rabbi Nehemia Polen, professor of Jewish thought at Hebrew College.

Embodied Kabbalah grew out of the Victoria, British Columbia based teacher and counselor’s capstone project at Hebrew College, where Ponak first felt the desire to share Jewish mystical teachings with a broader audience. “Hebrew College allowed me to have the skills and to point me in the direction where I was capable of finding a Jewish language that was largely untranslated or inaccessible for most people,” said Ponak.

“There’s wisdom from Jewish mysticism that I think everyone can benefit from,” he says. Reflecting this broad approach, his capstone paper was titled “Torah for the New Age.” Despite the new title, the approach is more or less the same: sharing the sources and grounded wisdom of Jewish mysticism more widely and more accessibly.

“The end goal on an individual level for Jewish mysticism is for someone to be able to connect to Spirit and Earth simultaneously and to be a blessing for those around them… And the global, communal goals are about making this world a better place on all levels,” said Ponak. “Peace on earth. That’s the big goal of Judaism.”

“Our world needs all the help it can get right now,” added Ponak. “And Jewish mysticism can be of tremendous assistance.”

The book’s intended audience includes people who feel alienated from Judaism and have a spiritual hunger to be in relationship to Jewish wisdom in some capacity or another. Whether they are descendants of conversos, grew up Jewish and for some reason or another didn’t connect with it spiritually, or people more interested in embodiment and somatics—Ponak hopes to connect readers to themselves, each other, the world, and the Divine.

To relate Jewish mystical teachings with perspectives from other religious and wisdom traditions, the Hebrew College Rabbinical School graduate pulls from his academic background in World Religions and features a comparative section in his book, where he incorporates teachings from Christianity, Buddhism, Sufism, and other traditions.

In addition to those on a spiritual quest of their own, Embodied Kabbalah is also a great resource for Jewish (and non-Jewish) educators. The book’s pages follow the page layout of traditional Jewish commentaries—with the English text in the middle (and the Hebrew in the back of the book) and commentary on the margins—allowing educators to provide an authentic introduction to the commentary tradition without the language constraints often necessitated by the traditional sources. Depending on the page, one might also expect reflection questions, pictures, biographies of commentators, and more educational resources. Several of the texts featured in Embodied Kabbalah are translated to English for the first time ever. For example, Rabbi Abraham Joshua Heschel of Apt (the great grandfather of Abraham Joshua Heschel), in a never before translated text, illustrates the spiritual path in a unique way. Level by level, he describes the different stages of the soul’s development. According to Ponak’s translation of Heschel, the path starts with fundamental acts of self-control and striving to live life with discipline and intention… And eventually, after several inner stages of transformation, “Heschel says you get to a place where your consciousness is viewing the world as God did, if you will, before it was created… your sense of self disappears into sacred nothingness—the same state as the Divine Mind.”

“The greatest single gift I received in rabbinical school was the ability to decode Jewish texts,” writes Ponak in the book’s preface. “Hebrew College had faculty, including the unbelievably learned Rabbi Arthur Green [who wrote the forward], who could transmit the esoteric (though increasingly proliferated) skills to translate and understand Kabbalistic and Hasidic sources.”

Embodied Kabbalah: Jewish Mysticism for All People will be published by Albion-Andalus, Inc. on December 15. Those who purchase a copy before then will receive an invite to the online book launch. The book is available for purchase from Barnes and Noble, Amazon, and other online booksellers. Click here to learn more and receive your ticket.