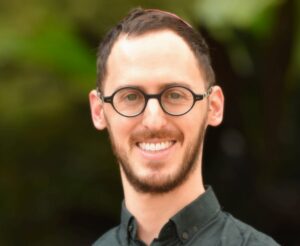 With this faith we will be able to hew out of the mountain of despair a stone of hope.

The world seems like a dark place right now. I don’t know if there is any way to effectively battle institutional racism, or the rampant capitalism that is all but destroying the middle class – or how to respond to a global climate crisis that has, by the estimations of most of the scientific community, passed its tipping point. I am afraid of what might happen next. When did my sense of trust that the world is always progressing toward some greater good all but vanish?

The Zohar depicts darkness entering the world at the end of the first day of creation. When the primordial light was formed on the first day of creation, it was immediately hidden away and no longer seen. Rabbi Yehudah argues, “Had it been hidden away altogether, the world would not have been able to exist for one moment.” Rather, it was only hidden like a seed that generates other seeds and fruits, and the world is sustained by it; there is not one day that something does not emanate from that light. In this way, the Holy One nourishes the world (Zohar, 148:b-149).

The mere fact that we continue to exist is evidence that the primordial light of creation is still present and available to us.

As I reflect on Martin Luther King, Jr.’s legacy on the 30th anniversary of MLK Day, I see glimmers of the daily light and sense of hope I had almost forgotten. King frequently drew on the biblical story to speak about how we strive to free ourselves from systems of oppression., and portrayed the black struggle for equality as a modern-day Exodus. For example, in “I’ve Been to the Mountaintop”, he shares his desire to see the Israelite’s moment of liberation: “I would watch God’s children in their magnificent trek from the dark dungeons of Egypt…across the Red Sea, through the wilderness on toward the promised land.”

How might this story also remind us how to hold hope during this dark time?

In Parshat Bo, we hear about the last three of the ten plagues that prompt Pharoah to finally free the Israelites from slavery. The second of these is a plague of darkness, a “darkness that can be felt” – one in which the Egyptians “could not see one another…[and in which] no one could get up from where they were” (Exodus 10:21-10:23). This supernatural suspension of daylight would seem to go against God’s promise that after the Flood “day and night shall not cease” (Genesis 8:22). Picking up on this apparent contradiction, Rabbi Baruch Epstein (in his collection Torah Temimah) suggests that this darkness is a kind of spiritual dimness – an inability to perceive the hidden light the Zohar describes.

The following night, the Israelites respond to darkness by staying in their homes, but there is a difference between the stillness of the Egyptians and that of the Israelites: the Torah refers to the night before the Israelites’ redemption as a leil shimurim, a night of vigilant watching. On the verge of liberation, the Israelites sit in a liminal space between night and day, freedom and captivity, speech and silence, wakefulness and sleep. Rather than suddenly bursting forth as a powerful people, merely turning the tables but keeping a system of oppression intact, the Israelites used this time as a space of self-reflection and visioning.

Unlike the Egyptians, they can see one another. As they join together to dream with their families and neighbors, they gain access to the primordial light of hope and steadfastness that illuminates their path out of slavery, and lays the groundwork for a society established on justice and compassion rather than reactivity and vengeance. Their goal is total societal and even psychological transformation, so that they might achieve at a mindset from which they can instruct their children, “You shall not hate an Egyptian, because you were a stranger in his land” (Deuteronomy 23:8).

Victor Frankl, in his classic Man’s Search for Meaning, writes about the importance of this in-between space: “Between stimulus and response there is a space. In that space is our power to choose our response. In our response lies our growth and our freedom.” In this powerful passage, Frankl extends an invitation during these dark days – counter to the culture of Pharaoh and his court – to withstand the desire for control, and in its absence, to resist collapsing under the weight of our doubts.

Like our ancestors, we must pause and look soberly at the conditions that shape the world in which we live, and choose how we respond to them. That watchful vigilance is the necessary prerequisite to true liberation.

As we hear the cries of fear and pain around us (or within us), such a liminal, reflective moment – in the darkest of times, or even in the dark of night – may feel like one of inaction. In reality, such reflection is one of the most challenging and disciplined forms of action. As we “watch”, we may notice little glimmers of light, those sacred seeds of redemption and societal awakening, not quite obscured by the shadows of pain and suffering, waiting to be nourished.

Rather than sitting idly by, paralyzed by cynicism – or charging toward the power brokers with vengeance – we can get up and join hands with our ancestors. Together, we will gaze into the darkness, waiting patiently until our eyes adjust and we can see something amidst the darkness. Perhaps a vision of freedom will begin to emerge – the outline of a primal hope that is already present, with which the world carries itself forward moment by moment.

Rabbi Adam Lavitt is a spiritual leader, educator, and writer living in Philadelphia, where he serves as the campus rabbi at Swarthmore College. He was ordained at the Rabbinical School of Hebrew College, where he also received a Master’s in Jewish Education, and a Certificate in Pastoral Care.  He has been a Liturgist in Residence at the National Havurah Institute, and a CLAL Rabbis Without Borders Fellow.