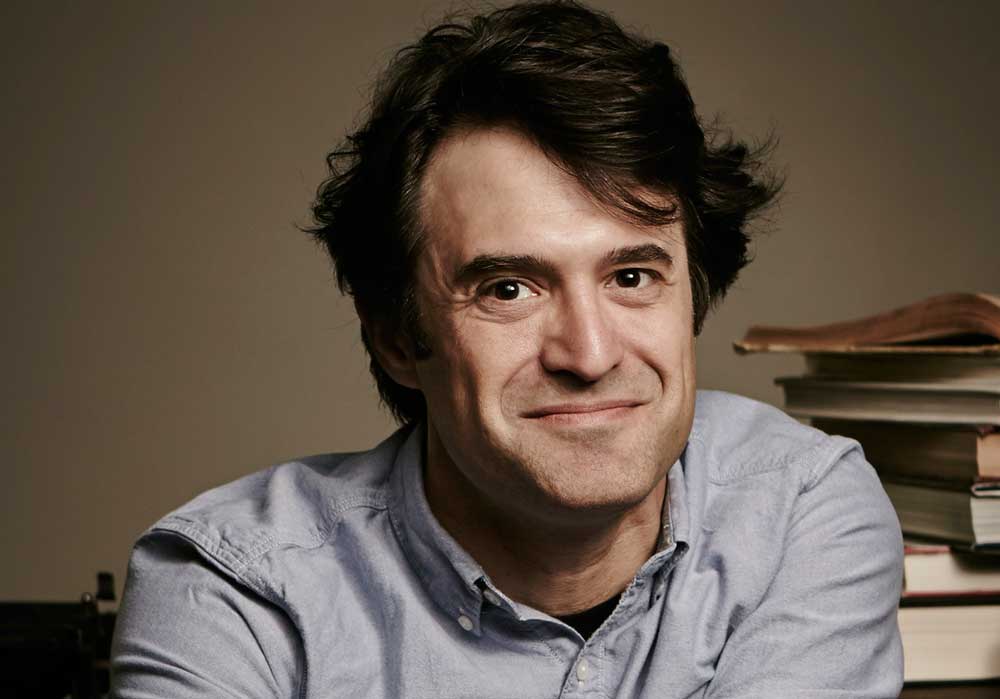 Mark Oppenheimer has been an “unofficial student” at Hebrew College for more than two decades.

He learned from Hebrew College President Rabbi Sharon Cohen Anisfeld in the mid-1990s as an undergraduate at Yale, where she was his Hillel rabbi. And when he got married 14 years later, he reconnected with Rabbi Anisfeld, then Dean of the Rabbinical School of Hebrew College, and asked her to marry him and his fiancée.

Later, as a religion columnist for the New York Times from 2010 to 2016, Oppenheimer learned from other Hebrew College faculty members — reaching out to Rabbis Dan Judson, Or Rose, Ebn Leader, and others, whenever he had a question about Judaism for his biweekly “Beliefs” column.

Oppenheimer, a journalist, academic, storyteller, and host of Tablet Magazine’s podcast “Unorthodox,” will honor his Hebrew College teachers, as the emcee of Hebrew College Live! Stories in Honor of Our Teachers, Hebrew College’s spring fundraiser, at Temple Beth Elohim in Wellesley, Mass., on May 30.

“A number of the Hebrew College faculty have been influential in how I think about Judaism,” said Oppenheimer, who lives in New Haven with his wife and five children. “They are simply the best resource for me as a journalist when I’m trying to explain Judaism to a lay audience.”

Oppenheimer, who grew up in Springfield, Mass., became interested in religion in college, where he was “exposed to some really extraordinary Jews,” he said. This included Rabbi Sharon Cohen Anisfeld, as well as Angela Warnick Buchdahl, another student of Rabbi Anisfeld who was two years ahead of Oppenheimer at Yale and is now Senior Rabbi at Central Synagogue in New York. He also knew Rick Brody, who was later ordained at the Reconstructionist Rabbinical College and serves as a chaplain in Denver, Colorado, and Josh Feigelson, now Dean of Students at The University of Chicago Divinity School. And in graduate school, he went on a Birthright Trip led by Jordana (Jordi) Schuster Battis, now a rabbi at Shir Tikva in Wayland, Mass.

He also became interested in American church history after taking a course with Harry Stout, Jonathan Edwards Professor of American Religious History at Yale, a historian of Puritan, New England.

“I had the good fortune of knowing a lot of Jewish leaders who were not yet professional leaders — they were students, early career educators, and they taught me,” he said. “I was personally interested in my own Jewish heritage, and also very interested in church history.”

Oppenheimer earned a BA in History in 1996, and a Ph.D. in religious studies from Yale, six years later. As a senior in college, he had decided he wanted to be a religion writer for The New York Times. He got there 10 years later, after working at the Hartford Courant and editing the New Haven Advocate. He also wrote two books during that time, including his dissertation, Knocking on Heaven’s Door, which describes how the tumult of the 1960s affected Protestants, Catholics and Jews in America, and Thirteen and a Day, which tells the story of his cross-country trip in search of unique bar and bat mitzvahs, from the Ozark Mountains to rural Louisiana to Alaska. The newer edition is called The Bar Mitzvah Crashers.

Oppenheimer left The New York Times in 2016 so he would have more time to tell stories. He hosts the weekly podcast Unorthodox, produced by Tablet magazine, where he “delivers the news of the Jews to the world,” and writes for The New York Times Magazine, Harper’s, The Atlantic, The Nation, The Believer, and other publications. He has taught at Yale, Stanford, Wesleyan, Boston College, and New York University; and gives frequent talks on faith, community, media, and politics. He also appears on television and the radio.

In addition, he is working on two books: The Newish Jewish Encyclopedia: Everything You Need to Know, From Abraham to Zabar’s, to be published in September, and a book about the Tree of Life shooting, and how the neighborhood came together to support each other in the aftermath, which will be published in 2021.

And, as a lifelong storyteller — and informal student of several Hebrew College faculty members — Oppenheimer is looking forward to hearing the stories of other Hebrew College students and teachers at Hebrew College Live! later this month.

“In my travels as a journalist, I talk to extraordinary people. People live within stories. If you ask people about the things that matter — how they fell in love with their spouse or what it was like to become a mother or why they returned to synagogue — they’ll usually give you a story,” he said. “I think it’s inspiring to see a fundraiser that’s going to put the ‘fun’ in fundraiser. I speak at a lot of events and galas, and I’m really looking forward to this one.”