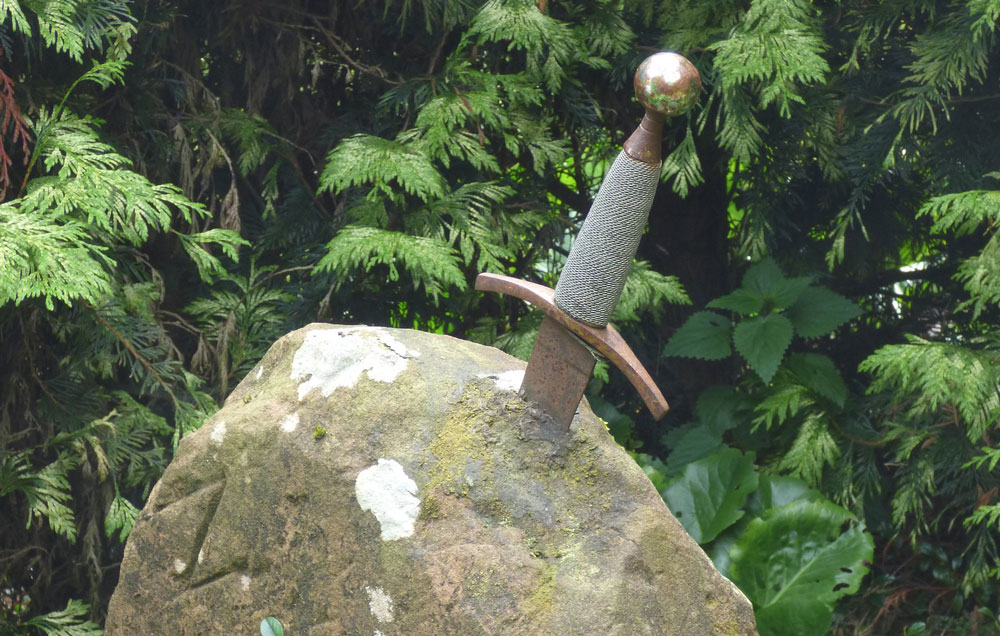 “The best thing for being sad,” replied Merlin… “is to learn something.
That’s the only thing that never fails.
You may grow old and trembling in your anatomies,
you may lie awake at night listening to the disorder of your veins,
you may miss your only love,
you may see the world about you devastated by evil lunatics,
or know your honour trampled in the sewers of baser minds.
There is only one thing for it then — to learn.
Learn why the world wags and what wags it.
That is the only thing which the mind can never exhaust,
never alienate, never be tortured by, never fear or distrust,
and never dream of regretting. Learning is the only thing for you.
Look what a lot of things there are to learn.”

When I encountered these words for the first time, I was in high school, engrossed in T.H. White’s classic novel about King Arthur, The Once in Future King. White was born in 1906. By the time he published The Once and Future King in ’58, he had personally lived through, among other things, the Spanish flu pandemic and both World Wars.

White had a whimsical imagination, but when he described the terror of the weakening body or the world being “devastated by evil lunatics,” he wasn’t being inventive; he had literally borne witness to those things. In the face of that depth of devastation, writes White, “there is only one thing for it… to learn.”

The Gemara in Kiddushin teaches that Torah is a sam tam— a perfect medicine. Torah is the wonder-drug, the cure-all that will protect us from society’s most dangerous ills. Torat Hashem temima- mishivat nafesh. Torah, sings the Psalmist, is life giving, restoring us to ourselves.

What is it about learning that has the power to soothe our sadness?

This week, during our nightly walk along the river, Aaron and I made another useless attempt to make sense of our summer plans. I had intended to work at a camp, but now whether camp will open is unclear; and if it does open a month from now, will we feel safe enough to travel there? What would it even be like to feel confident embarking on inter-state travel? I tried to picture us a month from now; tried to imagine the shops near our apartment opening again, to conjure an image of myself sitting on an airplane or at a rest stop on a long drive. But the images wouldn’t come. And then it hit me why I felt so lost, so unaccustomed to this particular kind of confusion.

“I think my imagination is broken,” I confessed. The massive uncertainty of the moment was making it impossible for me to imagine a different moment. How quickly I’ve adjusted to the new routine, the days spent indoors, the masked supermarket runs, the Zoom classroom. Faced with a completely novel experience, my mind has grasped for the rules of the new reality, and now seems stuck there. I know the world isn’t going back, at least not so quickly, to what it looked like before; but why does that mean that I can’t envision anything different than what it looks like right now?

There’s a wonderful cartoon rendering of a Brene Brown speech where she describes the power and importance of empathy. In the sketch, one person has fallen down into dark hole, and shouts, “it’s dark. I’m scared.” Sadness, in my experience, does feel like a kind of darkness. The clouds crowd in; the hours drag on; our world takes on the shape of the dark. It has always been this way; it will always be this way. We know there is a different way of feeling, of being, but we can’t see it; it stops feeling worth it to reach for it.

The Meor Eynayim, an 18th-century Hasidic master of Chernobyl, Ukraine, describes the process of Torah study as the key to a struggle with a sense of meaninglessness. By means of the learning process, writes the Meor, a person experiences a kind of raising up out of the darkness — transforming the darkness within herself into the light of morning.

What is it about learning that can feel like shining light into darkness; like being raised up out of a low, shadowy place? In the Meor’s language, when we learn Torah, we uncover the hidden light of the Divine. Within that light, the unbounded, all-encompassing Oneness of being, “there is no difference between now, and generations past; the present is no different than the future.” Learning expands our horizon beyond the here and now; we become aware that the universe is less limited than it appears. Learning transcends space, transcends time.

Personally, depending on the day, I’m not always sold on the underlying Oneness, that the universe at its core is all Divine light. What I have experienced, though, is the feeling of being transported by learning; the moment of stepping into the Beit Midrash and completely out of time.

I once heard a story about the scholar and philosopher Rav Soloveitchik, who as a child in the early 20th century, appeared before his mother distraught. “What’s wrong?” she asked him. “Daddy is angry with the Rambam,” he sobbed, referring to the Medieval scholar, dead for centuries, whose book his father was studying. “Don’t worry, Daddy loves the Rambam,” Soloveitchik’s mother assured him, “I’m sure they will work it out.”

To enter the world of Torah study is to enter a universe where time collapses; where I am both situated in my own world and sharing in a conversation across centuries. In learning, we become unstuck from our seat in the present, as we awaken the dead and as they speak to us across oceans and centuries. If I can open a book and traverse thousands of years; maybe imagining a different world than the present isn’t so far from my grasp.

If imagination was a muscle, the Rabbis of the Talmud were heavyweights of the highest class. And I’m not just talking about the midrashim about multi-headed monsters. Our Sages looked at the words of the Tanach and saw universes dancing in the spaces between each letter. To learn with our ancestors is to enter a world where what we see on the surface of the text is just one thread in a tapestry of stories to be told about where we come from and where we are going. If you can read like that— see the layers of beauty simmering beneath the surface, waiting to be discovered—no wonder you can envision a World to Come.

Why is Torah described as a salve, protecting us from the wounds of darkness that threaten to overwhelm us? Maybe because when we learn we experience, again and again, the wonder of the unexpected. Like watching a tree burst into bloom, when a text we are puzzling over suddenly reveals itself—when we think we will never understand, and then suddenly, the idea is clear as day; when a teacher reveals to us a story within the words we hadn’t yet seen there—our hearts fill with light.

Hope requires practice. It becomes easier and easier to envision a different future, something beyond what we know or what we have ever known, when we expose ourselves, relentlessly, to the unfolding of possibility revealed by the human imagination.

T.H. White himself had a pretty great knack for imagining. In the world of learning he conjures for the young King Arthur, Merlin turns the boy into a hawk, an ant, a fish; revealing world after world normally invisible to the human eye. After all, a leader whose charge will be to build a just kingdom needs to know, first and foremost, how to lift himself out of the dark.

Shani Rosenbaum is a rabbinical student at Hebrew College in Newton Centre, MA.