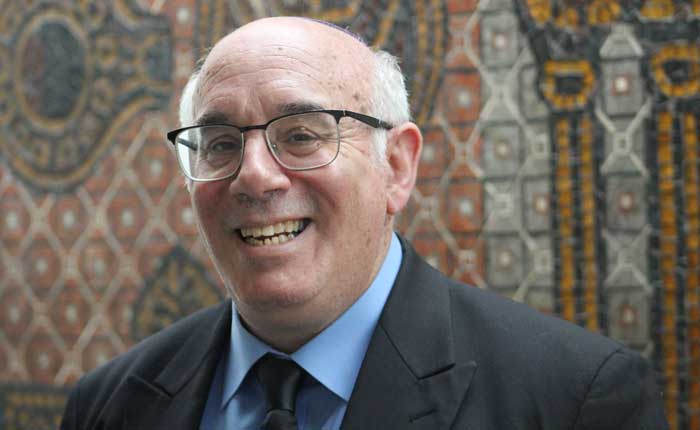 When he was first out of college, Nesson contemplated cantorial school, and even applied, but decided not to go. He ended up getting a job, and eventually, moving to Temple Emanuel. Becoming a card-carrying chazzan has been on his mind ever since — but family and work got in the way.

“Being employed full time and raising a family, I never thought I would have the time,” he says. “But a few years ago my family said, ‘It’s really about time you did this. You’ve been talking about this for 35 to 40 years. Stop talking and do something about it.’”

When Nesson’s wife passed away and his daughter applied to college, Nesson decided he was ready. He was accepted into Hebrew College’s three-year Cantorial Ordination for Spiritual and Educational Leadership (COSEL) program. He has enrolled part-time, and aims to complete the program in four years so he graduates at the same time as his daughter, who is currently a freshman in college.

“I’ve been able to work out my schedule so I am not missing substantial time from work to be in school, and because the shul and Hebrew College are only a mile-and-a-half apart, I can zip out of work and be in class or zip out of class and be back at work in 15 minutes,” he said. “My congregation is very supportive of my studies.”

Nesson sees cantorial school as an opportunity to take what he does in his profession and bring it to another level. As a longtime ritual director, Nesson has a lot of experience with davening, nusach and cantillation, but little experience with conducting and accompanied repertoire, he says.

“Even familiar topics like nusach are taking on new meaning for me,” he says. “I had to write out new settings and create my own composition – something I never imagined I could do. All of these are new skills are proof that you can teach old dogs new tricks! It’s rewarding and fulfilling.”

Nesson says he passes on what he’s learning to his congregants, conducting the choir with the skills he learned from his conducting class, writing and sharing  original music after taking a summer COSEL course with Noah Aronson.

He’s learning from his classmates too, whom he says, “all come from a different place in terms of age, experience, synagogue life.” His cohort includes students who have studied voice or opera at conservatories, as well as professional educators. Those without a deep knowledge of Judaism and  Hebrew are bringing their high level of musicality to Jewish texts, while Nesson, who has the opposite background, brings his synagogue life experience to the technical learning of musical modes and keys in order to deepen his understanding of the music.

“The group is like being a player for the New England Patriots — everybody is so supportive of each other. Everyone will go out of their way to help someone who needs help. I know there are a lot of graduate programs where classmates compete so they can get the best job. Yes, we all want to better our careers, but we are 100 percent there for each one of our classmates. It’s really very special.”

He’s also learning from his past students. Ken Richmond, one of his former Bar Mitzvah students, is now a cantor and adjunct faculty member in the COSEL program, as well as a first-year rabbinical student at the Rabbinical School of Hebrew College.

“It has been so exciting to see Kenny in the role of a professional cantor, an educator, and a developer of curriculum. To quote Yoda from Star Wars, ‘The student has now become the teacher.’”

And, of course, he’s thrilled to be learning from Cantor Brian Mayer, Dean of the School of Jewish Music at Hebrew College, whom he first met 30 years ago, when Mayer was a cantorial student and served as a guest cantor at Nesson’s congregation in West Hartford, Conn. In the years since, they participated together in the Zamir Chorale of Boston.

“I think Brian is a spectacular teacher,” says Nesson. “I’ve heard him daven and sing in choirs, but the opportunity to see the breadth and depth of knowledge and professionalism is very exciting to me. It’s rewarding to learn from someone I knew as a youngster, who is now an accomplished teacher, musician, and spiritual leader. ”

“It’s nice to be able to learn with people that are knowledgeable, passionate, recognized experts in their fields in which you also have a personal connection,” he added. “That makes a big difference in terms of the quality and connectivity of learning.”