Jewish learning The Power of Niggunim in this Moment

A niggun is a wordless melody, simple or complex, slow and meditative, or fast and jubilant, sung over and over again.

A Hasidic tradition, niggunim are meant as mystical prayers, sacred practices, a path to deepen the soul, expand the spirit, and embrace the divine. And for rabbinical student Shani Rosenbaum, they are a powerful musical genre for this unprecedented time.

“We don’t really have the words to say what it is we’re going through today,” said Rosenbaum, a Shana Dalet (fourth year) student at Hebrew College and intern at Temple Israel of Sharon (MA). “Wordless melodies are particularly powerful, especially at a moment where we’re at a loss for words. Singing can bring us joy and lift us. I’ve experienced a single niggun carrying me through times of enormous joy and enormous pain.”

So Rosenbaum and her classmate, a Shana Bet (second year) Hebrew College Rabbinical School student Jackson Mercer, a musician and composer of Jewish music, have turned to Zoom to share the power of niggunim with others. They co-host a weekly 30-minute “Hebrew College Niggun Seminar” on Thursdays at 1 p.m., on Zoom and JewishLIVE, where listeners can learn about different niggunim and connect with others through song.

“The goal of the seminar is for people to press pause within existing frameworks of their lives, to take a half hour to sing a little bit,” said Rosenbaum. “One of the biggest losses for people who want to connect to the community musically during COVID is that suddenly there aren’t great frameworks to do that. Singing over Zoom is really hard, and prayer communities are still adjusting. Participants have reached out to me to tell me how they ‘needed this,’ and that they felt more relaxed and joyous after just half an hour of getting to sing together.”

Rosenbaum initially launched the seminar in March through her role as a rabbinic intern at Temple Israel of Sharon. She was asked to bring more energy into the prayer life of the congregation and cultivate opportunities for temple members to connect through spiritual music. When the quarantine began, instead of offering just an online text class, she drew inspiration from an old college friend’s idea and launched the Thursday Niggun Seminar. Soon after, Mercer joined as co-host and the seminar became a Hebrew College initiative and partnership with JewishLIVE. 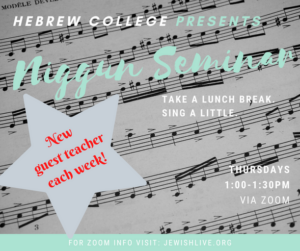 Each week: a “guest host” introduces a melody, discusses the origins of the melody, and shares Torah that goes along with it. Then the guest host teaches the niggun to either Rosenbaum or Mercer, while the other host is on mute, doing behind-the-scenes tech work. This avoids sound feedback, which Rosenbaum learned through trial and error in davening experiments with other Hebrew College students during their first week of digital schooling. As Rosenbaum or Mercer learn the niggun, listeners can sing along with them, having the experience of learning the song themselves while their microphones are off. Rosenbaum and Mercer take turns as the leader and learner each week.

“I, as a host, am the voice of the learner. Everyone else is on mute because it’s difficult to have multiple voices. But everyone tuning in is always singing along with someone’s voice. And we also have the experience of multiple voices so it mirrors a little bit the feel of singing in community,” Rosenbaum said. “A niggun is a very egalitarian practice. You don’t have to be able to read notes, you don’t have to be particularly scholarly to absorb the power of a Hasidic story. We want people to be tapping into a shared spiritual language, connecting to the broader community, connecting to something quite old.”

Rosenbaum says she first discovered the true power of niggunim as a freshman at Brandeis University. Fellow students organized a Thursday night niggun seminar very late at night in a dark beit midrash in the basement of a dorm, where it smelled like laundry and cholent. Someone would teach, and after the learning, a small group of people would stay, turn off all the lights, and sing. It was a powerful experience. Rosenbaum didn’t study Hasidism until years later — but, she says, “the music was already very much with me…. that’s one of the profound legacies of the Jewish musical tradition.”

Mercer, who is producing a Jewish music album, says that is why the Hebrew College Niggun Seminar is so special — it enables the Jewish tradition of teaching niggunim, even in a time of physical separation, and extends the musical experience to an even wider audience.

“What Shani has done so brilliantly is build a format that makes learning niggunim accessible and heimish in a time when initially that felt impossible,” he said. “I feel really fortunate to be helping facilitate this as my way of saying to our communities, ‘I know things aren’t the same right now, and that’s okay, but let’s not stop learning these things we hold dearly. In fact, let’s learn from people we never would have been able to learn from — with the help of technology.”

Many weeks, close to 50 people have tuned into the Hebrew College Niggun Seminar. One week, in honor of Rosh Chodesh, Rabbi Miriam-Simma Walfish taught a melody to “Eli Ata” that appears at the end of Hallel. Rosenbaum shared a few words inspired by R’ Miriam Glazer’s book “Psalms of the Jewish Liturgy,” which she has been reading this semester as part of a interfaith Psalms class co-taught by Rabbi Or Rose, director of the Miller Center for Interreligious Learning & Leadership of Hebrew College, and Andrew Davis, a faculty member in the School of Theology and Ministry at Boston College.

Other weeks have featured Rabbi Nehemia Polen, a professor at Hebrew College who has written extensively on niggunim, Hebrew College alumnus Jessica Kate Meyer, Rab`14, Rabbi/Chazzan at The Kitchen in San Francisco, who infuses niggunim from all over the world into her teaching and prayer leadership (watch a video of Jessica in action), and Hebrew College graduating rabbinical student Noam Lerman, who presented a Ukrainian melody.

“We have this wealth of alumni and teachers and associates and friends of Hebrew College who have such deep wells of knowledge and wisdom around Hasidic tradition. We want to be able to share that treasure with people,” Rosenbaum said. “I feel really lucky as a Hebrew College student to have regular opportunities even during this time to be connecting with amazing people through music.”

Tune into the Hebrew College Niggun Seminar on Thursdays at 1 p.m. on JewishLive.org.