In 1947 when Vivian Sigel z”l was 18, she began commuting every day on the train from Worcester to Brookline to attend Hebrew College on Hawes Street.

In her four years at Hebrew College, she earned her college degree—and fell in love with being a Judaic scholar. “She loved studying Talmud and became fluent in Hebrew. She also became very steadfast in her Jewish traditional beliefs and her commitment to teaching. Perpetuating Jewish education really became a life mission for her,” said her son, Bob.

Vivian developed her passion for Judaism watching her father, Hyman Steinberg, a Lithuanian immigrant who enriched Jewish education in his adopted community by founding the Worcester Ivriah School and a chug for Yiddish speakers like himself.

“My grandfather was the one who inspired my mom to become a Hebrew teacher,” Bob said.

Bob remembers his mother talking about becoming very close to several people at Hebrew College. “She always encouraged people to study there. She was all about sustaining Jewish education and its value. She was incredibly committed.” 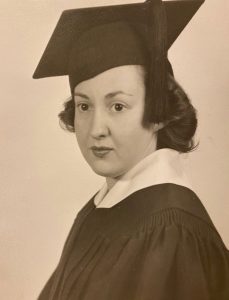 After graduating from Hebrew College in 1951, Vivian married, started a family, and worked as a Hebrew teacher for many years at Beth Israel Synagogue in Worcester, where she had also worked part time while studying at Hebrew College. Bob recalls, “Mom was my first grade Hebrew teacher. I called her Morah Sigel. In class she would whisper in my ear, ‘If you don’t pay attention and behave, I’m telling your father when we get home!’”

According to Bob, his mother was responsible for pushing his family to understand Hebrew language, Jewish values, and their Jewish roots—and that passion came from her upbringing and her experience at Hebrew College. “We called her “The Family Rebbetzin,” he said. “Not only was she learned, she also instilled values of love of Jewish learning, tikkun olam, and a commitment to Jewish philanthropy in us. And those are values we carry on today. L’dor vador!”

And she also inspired her children to give back to Hebrew College and other Jewish causes. Among their many philanthropic endeavors, the family helped found the Solomon Schechter School in Worcester; he and his siblings have held numerous positions on Jewish Boards in the Worcester area; and Bob and his siblings’ foundation, the Sigel Family Foundation, recently supported Hebrew College’s Capital Campaign for the new shared campus in memory of his mother.

“Hebrew College was always in the back of my mother’s mind. She attributed her knowledge and her lifelong passion for Jewish education to her professors at Hebrew College. I know it was a special place to her.”