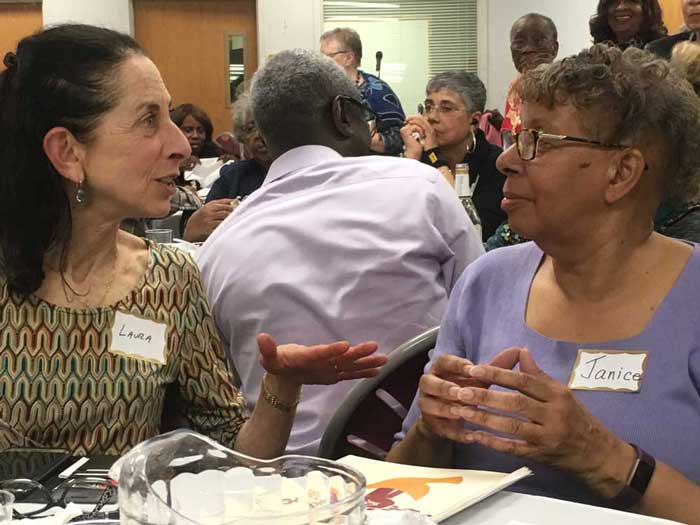 Each year, members of Congregation Beth Hatikvah in Summit, N.J. and neighboring Fountain Baptist Church come together around two Seder plates to share their stories of enslavement and liberation through the lens of Exodus.

Rabbi Hannah Orden, Rab`10, spiritual director of Congregation Beth Hatikvah, came up with the idea for this Jewish-Black Liberation Seder four years ago, after her congregation and other local communities participated in a series of interfaith discussions on race

As Passover approached, Orden, a member of the Summit Interfaith Council Anti-Racism Committee, realized she could use the Passover Seder to strengthen the conversation. She partnered with friend and colleague, Pastor Vernon Williams of Fountain Baptist Church, to organize the interfaith Seder.

“It’s a vehicle to bring the community together and address the effects of racism in society. We use Exodus as the jumping point for discussion,” she said. “Church members were amazed that we were still telling a story from thousands of years ago. They didn’t have a means to tell their own exodus story. Our story inspired them to tell their own story.”

The first year, 180 people showed up to their communal Seder, which began with the singing of Hinei ma tov u’manayim, shevet achim gam yachad, (“How good it is when we dwell together as brothers and sisters”) and continued with discussion questions, music by both a cantor and the church’s Baptist choir, as well as prayer.

The following year, the two communities worked with Rabbi Orden to add four new sections about African-American slavery into the Hagaddah: (1) Our Rich Heritage about African civilization; (2) Middle Passage about the slavery ship passage to America; (3) Life in the New Land; and (4) Watch Night, which celebrates Black emancipation.

And, in the years since, the Haggadah and Seder have continued to evolve.

“After last year’s Seder, we learned that people cherished the personal connections and table discussions more than anything else,” Rabbi Orden said. “So this year, instead of conducting the seder from a head table at the front, we had an individual seder conducted at each of the 20 tables with co-facilitators – one Jewish and one Black – so the experience would feel more intimate and participatory. At several points we came together as a whole group to sing songs from Jewish and African-American traditions.” Whenever the cantor and choir began a new song, it served as the signal for everyone to wrap up a discussion and join together in prayer and songs including Avadim Hayinu, Go Down Moses, Amazing Grace, Oluwa (Many Rains Ago), Sometimes I Feel Like a Motherless Child and others. 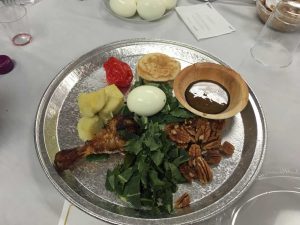 This year they also served a meal of chicken, collard greens, and yams, as well as desserts baked by members of the congregations. They also added a second Seder plate, commemorating Black history, which includes collard greens, a roasted chicken leg, spicy red pepper, white corn hoecakes, boiled sweet potato, and haroset made from molasses and pecans. [Read more about these symbols in the Liberation Seder Haggadah.]

“It worked beautifully,” Rabbi Orden said, “and everyone commented on how meaningful it was to connect with the people at their tables. Several people mentioned that they started the evening as strangers and left as friends.”

> Learn more about the Rabbinical School of Hebrew College in Newton, MA.