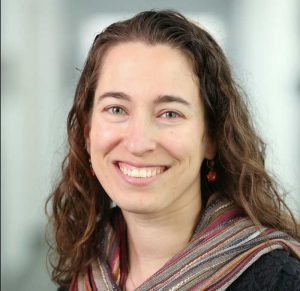 Their relationship is tenuous from the womb and grows increasingly complex.  The yoke of Yaakov’s fingers wrap around Esav’s heel throughout their early lives.  His tight grip on Esav’s inheritance is one of the few expressi ons of strength in Yaakov’s early character.  Yaakov’s skin, so smooth and slippery, is pale blue and translucent since the time in his mother’s tent.  Pale yellow is mixed with the blue to represent (in a Western color symbolism schema) Yaakov’s betrayal, deception, and jealousy.

In this piece, Yaakov reaches toward Esav – simultaneously aspiring to claim his inheritance and angling to hold him back.  In contrast to the angled reach of Yaakov, Esav stands firmly.  Bold reds and oranges represent his comfort in the field as a hunter, and with the blood of revenge.  Where Yaakov is able to reach and slide into yet another deception – and to flee freely, Esav’s foot is planted and unmoving.  Esav’s motives and the lines of his journey are clear. He does not possess Yaakov’s ability to change forms and places, and therefore finds himself locked into his home life with his wives and parents.

In this mixed media piece, Yaakov has not yet taken on the hairy disguise of animal skins.  Yet from the time of his birth, grasping his brother’s heel, the red of Esav’s stolen blessing is foreshadowed in Yaakov’s fingertips.  By stealing his brother’s birthright, Yaakov takes on the blessing and burden of the lot intended for Esav: animal fats and dew of the fields, seed and wives and children, and dirt beneath his fingernails.  Is the uniquely Esavian blessing that Yaakov receives a mixed bag for the bookish youngster?  The weight of living out his brother’s destiny will follow him as he starts his own life of wives, children, sheep, and land.

Once Yitzhak realizes that he has been deceived by his younger son, he struggles to give a blessing to his first born, Esav: this second blessing given by Yitzhak echoes of the dew and fat promised in the birthright, but is tainted by the tight grip of Yaakov’s dominance.  The blessing received by Esav is, in this piece, written on Yaakov’s scrawny hand, holding on to and holding back his brother’s heel.

Despite being depicted as extreme contrasts, one of the few consonant themes in Yaakov and Esav’s early lives (shown in this piece) is that of tears: in the moment that Esav realizes his birthright blessing has been stolen, Esav raises his voice and cries out in anguish to his father, weeping as Yaakov would.  Yaakov, the crier, the wet-slippery one, the deceiver, caused these tears.  And though Esav raises his voice, pleading for a real blessing for himself, he cannot uplift the sorrow (literally depicted in this piece by a tear with Esav’s words) caused by Yaakov’s grip.

Yaakov and Esav’s reasons for crying are distinct, yet the brothers share the experience of being so overcome with emotion that they cry.  The single tear in this piece breaches bodies: Esav’s part is heavy with words and Yaakov’s is not yet filled, for he has yet to know the cry of the deception soon to befall him in the house of his father-in-law.

Laura Bellows is a third-year rabbinical student at Hebrew College.