Who was Zalman Schachter-Shalomi?

Reb Zalman (an informal title he preferred) was one of the most influential and creative Jewish spiritual teachers in recent decades. Born (1924) into a modern Orthodox family in Poland and raised in Central Europe, young Zalman and his family fled the Nazis and emigrated to the United States in 1941. As a young man, he trained intensively as a HaBaD-Lubavitch rabbi and for a time served as a HaBaD emissary and educator. Beginning in the 1960s, he became increasingly involved in liberal Jewish and interreligious life. Soon, he emerged as one of the leading figures in the Jewish religious counter-cultural movement. He went on to create the Jewish Renewal Movement and taught thousands of people—Jewish and non-Jewish—classical Jewish mystical sources and his contemporary interpretations. In going about this work, he sought to ask what “spiritual technologies” from the past can help us become more thoughtful and transparent beings in the present. This project, which he called “Jewish renewal,” involved a variety of experiments over the decades, braiding together the old and the new.

What were some of the contributions he made to contemporary Jewish life?

Reb Zalman was a spiritual polymath who had a particular passion for prayer and ritual. Among his early innovations was the fashioning of the “rainbow tallit,” perhaps the first multi-colored prayer shawl (now common place in many Jewish communities). He also introduced many people to Jewish meditation practices from Hasidic and Kabbalistic sources, as well as adaptations of rituals from Christian, Muslim, and Buddhist traditions. As I mentioned above, he also was a pioneer in the interreligious sphere, meeting with renowned figures such as Howard Thurman, Thomas Merton, and the Dalai Lama. One other area in which he made a significant contribution later in life was spiritual eldering. As he aged, Reb Zalman developed a distinctive framework and practices to help people in “fall” and “winter” seasons of of their lives reflect on issues of mortality, legacy, as well as their potential role as wisdom keepers or sages for younger generations.

Why did you undertake this book project?

I did so because after Reb Zalman’s death (2014), I missed learning from him and sought a way to remain connected and think more deeply about his work and influence on my life. Which elements continued to resonate with me? Which might be helpful to others along their spiritual journeys? I was particularly interested in his interreligious work, as this is the central focus of my rabbinate at this stage of my life. I have learned a lot from Reb Zalman’s bold efforts to reorient people away from religious competition and toward cooperation. While deeply steeped in Jewish text and tradition, he modeled unusual openness to learn from non-Jewish religious sources and share the riches of Judaism with people beyond the Jewish community. This has had a direct impact on my work at the Miller Center. Co-editing the book (Orbis Books, 2020) with friend and colleague Netanel Miles-Yepez also provided me with a very rich opportunity for havruta (peer) learning with an insightful and talented spiritual teacher, who possesses unique insight into Reb Zalman’s life and work.

Rabbi Or Rose is the director of the Miller Center for Interreligious Learning & Leadership at Hebrew College. 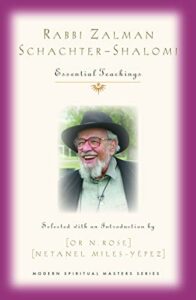 Rabbi Rose also will be teaching a Hebrew College community learning course called “In Search of Renewal: The Spiritual Legacy of Rabbi Zalman Schachter-Shalomi” six Thursdays from Sept. 10 to Oct. 15. Students will explore Reb Zalman’s legacy in the year 2020, including the health and social crises we find ourselves facing today. Learn more & register.