Community Blog Rabbi Laura Bellows, Class of 2018, brings her passion for teen learning and community back to Hebrew College 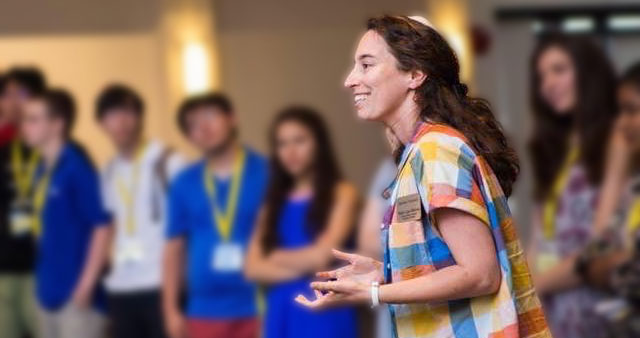 Raised in a Havurah community in Washington, D.C. that didn’t have a formal educational program, she attended Hebrew School at another synagogue that left her “longing for more.”

But Shabbat mornings were different. In her family’s spiritual egalitarian community where everyone was a teacher and a learner, Laura leaned into Jewish leadership. She led services, taught children’s classes, and offered a b’nei mitzvah seminar. She also got involved in the National Havurah Committee Summer Institute, where she and a group of friends created their own winter-break learning and service Shabbatonim starting at age 13.

Then, on a summer trip to Israel at age 15, she saw first-hand how engaging Jewish teen education could be. Her program took her out of her comfort zone, combining creative Jewish study and workshops in the visual, performing, and literary arts. For Rabbi Bellows, Torah came alive in a pluralistic, multi-denominational artistic space.

“It was the first time I was in a space where I felt like I could completely engage both my artistic expression and my passion for Jewish learning. It was a pivotal experience,” said Rabbi Bellows. “I was hungry for real connection with other teens. This trip, along with the Havurah movement, showed me models of engaged, relevant, and pluralistic Jewish community, and ultimately catalyzed me into going to Hebrew College and being the educator that I am today.”

Rabbi Bellows often jokes that becoming an ordained rabbi was an act of rebellion against her upbringing in the Havurah movement, which resists rabbinic authority. But she has spent the last two decades as an ambassador of the Havurah movement, modeling the immersive Jewish experiences she had as a teen to create and nurture transformative learning and community-building experiences for Jewish teens today.

Since August, Rabbi Bellows has been the Director of Prozdor and Youth Initiatives at Hebrew College, overseeing Hebrew College’s high school (Prozdor) and middle school (Makor) programs, and working with Leah Goldstein, Director of The Jewish Teen Foundation of Greater Boston, Hebrew College’s teen philanthropy program. And she is busy thinking of new and different programs to further engage and better serve the Greater Boston Jewish teen community, which she plans to launch in the coming year.

“Fundamentally, the Havurah movement is based on a model of do-it-yourself Judaism, which encourages innovation, creativity, and empowered ownership of Jewish tradition. That innovation and creativity doesn’t come from one person thinking of all the new brilliant ideas. It comes from building relationships, and from learning in havruta, in community. It comes from this mentality of believing that every person, regardless of their age, has something to bring to this world and that we are always learning,” Rabbi Bellows said.

Growing up as a teacher and learner in her community, Rabbi Bellows says she always knew she wanted to be an educator. She also wanted to make a difference in the world. She studied environmental studies at Oberlin College, where she lived with Rabbi Aaron Fine, Rab`09, and Rabbi Shoshana Friedman, Rab`14, now Director of Professional Development at Hebrew College. She considered becoming a science teacher or art teacher.

After graduation, she “went through a many-years process of trying to rule out rabbinical school.” She spent a season working with Jewish day school students at the Teva Learning Center, a Jewish environmental education program in the Berkshires. There, she says, she found environmental justice work grounded in spiritual practice and tradition. Week after week, she encountered students who came to Teva for five days and left transformed, returning as Teva educators, and then going on to become scientists, activists, and teachers. As on her Israel trip, she saw the Torah come alive.

She then moved to Washington, D.C., to run an urban youth community garden, but she missed the spiritual grounding of Jewish learning and ritual that she had experienced at Teva. A year later, she returned to Teva as the organization’s first Director of Congregational and Community Learning, designing inquiry-based environmental education programs through the lens of Jewish spirituality, text, history, and tradition for congregations across the country.

“I saw that the Jewish wisdom inherent in our tradition was deeply informing environmental responsibility, and visa-versa, and it felt extremely powerful. Teva taught me what Jewish education could be — a powerful and alive and student-centered type-of-learning,” she said. “It inspired me to become an educator and to go to rabbinical school. It is incredible what’s possible when the Torah is made both relevant and accessible in a very lived way.”

Rabbi Bellows chose Hebrew College because she wanted to learn from those with different beliefs and practices. As a rabbinical student, she started the Hebrew College Eco-Ritual Lab, taught in Prozdor and Makor, and led services and created programs at synagogues throughout the area. She spent summers teaching at the Ziering Brandeis Collegiate Institute, which brings together young Jewish adults from all over the world to engage in Jewish learning, arts, culture and an exploration of community, and self.

After graduating in 2018, she spent two summers as director of Genesis and BIMA, month-long arts and academics precollege programs at Brandeis University. There, she received the Lippman Kanfer Prize for Applied Jewish Wisdom for a new intensive teen course she created called “Being the Change: Public Policy, Justice, and Advocacy.” She also worked — and continues to work — as a soferet, a female scribe, repairing and writing Jewish sacred texts, including keutbot.

Since returning to Hebrew College in August 2019, Rabbi Bellows has been working with Hebrew College President Sharon Cohen Anisfeld and Hebrew College staff members and faculty on strengthening youth programs at Hebrew College; building new innovative and creative immersive Jewish learning experiences based on what students want today; and hiring faculty who are teachers and seekers themselves — who can engage and inspire leaders of the future. She is also a participant in the inaugural cohort of the Hebrew College Innovation Lab, a new incubator for Hebrew College graduate students and alumni to design and implement creative educational, spiritual, social justice, and interfaith projects in the Greater Boston Jewish community.

“I want to create spaces where teens can come together and build real community with peers, pursue their learning in a range of different fields and passions, and feel empowered to make change in the world,” she said. “I want to build on the strength of Hebrew College to create deeply-engaged, Torah-loving communities of seekers, to find spaces where teens can ask the questions that are in their hearts, to build connections that lead them to stay involved in the Jewish world and in a world of learning and justice-seeking for years to come.”