For Mark Atkins, attending Hebrew College Prozdor from age 12 to 17, in the early 1960s provided a link to Jewish community and a deep sense of connection to Judaism. It also fostered a lifelong commitment Jewish learning and to Hebrew College.

Atkins’ connection to the institution continues today, six decades later, where he has served as an active advocate, volunteer, donor, Board member and Board Chair, and 2019 recipient of an honorary doctorate degree from the College. 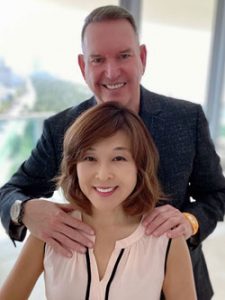 Now Atkins, a retired high-tech CEO, is helping to secure the next century of Hebrew College—through a $1 million gift to Hebrew College’s Capital Campaign, Branching Out, Building Together. His donation will name the Mark E. Atkins and Family Atrium and Gallery Corridor of Hebrew College’s new home in the Auburndale neighborhood of Newton. The College will move to its new home, a shared Jewish campus on Washington Street, in January 2023.

Atkins, and his partner, Miho Sato, are being honored this spring, along with other community leaders and supporters, at Hebrew College’s Centennial Celebration, “Remember. Renew. Reimagine.”

“This is the centennial anniversary of the College and I wanted to help celebrate that milestone, to contribute to the future of the College, and to ensure the sustainability of vibrant Jewish learning,” said Atkins, who attended Hebrew College on Hawes Street in Brookline. “I want to see the vibrant environment for Jewish learning across multiple disciplines continue in this new complex, where I hope the College will celebrate its second centennial anniversary.”

Hebrew College President, Rabbi Sharon Cohen Anisfeld, added: “I have been blessed to get to know both Mark and Miho well and to experience their generosity, warmth, and hospitality firsthand. Mark’s memories of his days at Hebrew College are filled with reverence and affection, but his dedication goes far beyond nostalgia—he is always looking toward the future, with vision, optimism, imagination, and realism—encouraging me to dream, with eyes wide open.”

After graduating from Prozdor, Atkins attended UMass Boston for his undergraduate degree and Babson College for his MBA. Then he spent 40 years in business, including as chairman, CEO, and president of two high tech companies—one of which he founded—that evolved into global market-leading entities. In 1990, he co-founded Vality Technology, Inc., a Big Data software company, where he served as Chairman and CEO until 2002, when Ascential Software (IBM) acquired the company. From 2002 until 2012, he served as Chairman and CEO of Invention Machine Inc., a global innovation software system that was acquired by IHS.

From 2013 until 2018, he served as an adjunct professor at The University of Massachusetts-Boston College of Management, where he taught Entrepreneurial and Global Strategic Marketing courses to MBA and undergraduate students. Over the past decade, he has also served as a Board Director, consultant, and mentor to several technology companies. He received an honorary doctorate degree from Hebrew College in 2019.

“Prozdor left me with life lessons, I learned so much from the various sources of text that I studied that have always been a guiding light. Perhaps most importantly, I learned how important it is to give back to the community,” he said. “Education is the beacon for the future progress of Judaism. It’s very instrumental for Jews going forward to know about their heritage, to know about their legacy, to learn life lessons, to develop compassion, to build a moral compass for the future. For me, Hebrew College was—and is—a blessing, and I’ve been blessed that I’m able to do something for future generations of students, to help contribute to the college’s next 100 years.”