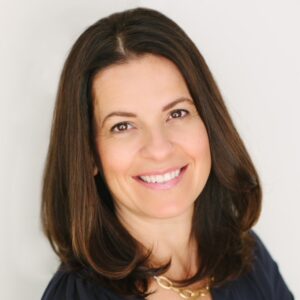 “If you’re interested in making real measurable progress in Hebrew, then Ulpan through Hebrew College is really going to get you there.” Sari Korman, a Boston area lawyer and mediator, has worked to improve her Hebrew language skills on-and-off over the years but nothing really stuck. Not until Ulpan.

Korman wanted to participate in deeper, more meaningful conversations with Israelis and other fluent speakers. But, before Ulpan, “the conversations were never interesting to me,” she noted. “When I came to Ulpan, I called my Hebrew ‘kindergarten Hebrew.’ It was the stuff I needed to communicate to be able to eat, use the bathroom, and have fun … but nothing deep, no discussion of politics, or feelings.”

Hebrew always played a role in Korman’s life. Her mother was born in Yemen, raised in Israel, and often spoke Hebrew in the house to her children. She didn’t speak any English when she married her husband, an American who spoke no Hebrew—and they were both deaf. Since American Sign Language and Israeli Sign Language are unique sign languages, the newly married couple communicated mostly through gestures early on in their marriage.

Her mother’s hearing impairment affected her pronunciation, which impacted Korman’s word recognition and pronunciation. “There were words that my mother would say as a kid, that I realized much later [what] those words actually were,” she noted. She wanted a way to make sense of it all, and that missing something was Hebrew College’s Ulpan.

After starting the program when it went digital, Korman now feels more comfortable than ever before speaking in the past tense and even the future tense, though she’s still working on that. Her abilities have finally surpassed kindergarten Hebrew, and she is able to converse more readily with native speakers. “It’s really amazing.”

Ulpan classes are not just individual success stories. Like all classrooms at Hebrew College, learning requires others. Hebrew College faculty members Osnat Hazan and Iris Schor played an indelible role helping Sari advance through the language levels offered by our program. “Many of my teachers throughout the years were Israelis with no training as Hebrew instructors.” The Hebrew College Ulpan faculty members are different. They understand what works and what doesn’t—and they have the necessary training and experience as professional educators. With the help of incredible and encouraging faculty members like Hazan and Schor, Korman is confident that she can realize her language learning goals for the upcoming Ulpan courses.