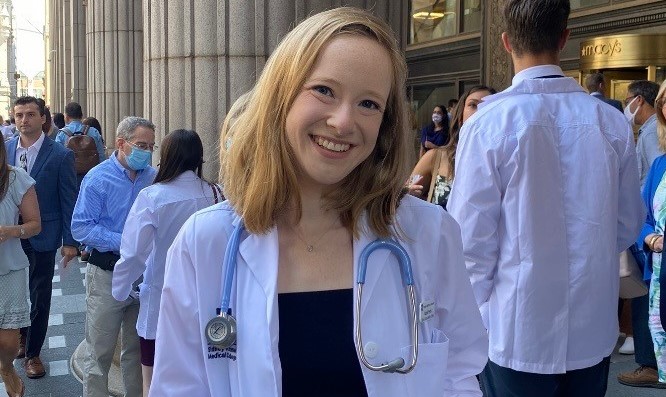 Natalie Perlov enrolled in Hebrew College’s online Ulpan (Intensive Hebrew language) program while applying to medical school. She was home during COVID and thought it would help her “unwind and learn a new skill.”

The daughter of two immigrants—her father is from Russia via Israel, and her mother from South Africa—she first studied Hebrew in middle school as a student at The Rashi School, a Jewish independent school in the Boston suburbs. Her father speaks Hebrew, so when she started learning the language, Natalie felt that she and her father had a “code language” of their own.

In college, at Tufts University, Natalie studied linguistics and biopsychology. She sees languages as “puzzles,” where you create “recipes” by putting different sounds together to make words, and has always believed that learning languages connects people and “opens doors.”

She graduated in 2020 and decided to enroll in Hebrew College’s Ulpan during her year off from school when she saw an advertisement in a Combined Jewish Philanthropies (CJP) newsletter. She was placed in an upper intermediate Hebrew class with instructor Maya Dalzell, who also teaches at Rashi, and was thrilled to return to the classroom.

“It was just learning for learning’s sake, and I have absolutely loved it,” Perlov said. “I knew it was a great opportunity to practice speaking and focus on the topics I was interested in. I just really loved the feeling of being in the classroom again and having a teacher and getting feedback in a very relaxed environment. I was learning and being pushed to grow and being pushed to think.”

In Hebrew College’s Ulpan, Perlov learned grammar, Israeli culture, and reading comprehension. As part of the course, she and her classmates read a novel in Hebrew, which exposed them to both traditional Hebrew and modern slang.

She starts medical school this fall at Thomas Jefferson University in Philadelphia, but is hoping to continue with the Ulpan program, if it works with her schedule. She is about to start anatomy class, which she has been told is like learning a foreign language—and she hopes her Ulpan experience helps.

“The way learning a language trains your brain is so invaluable for any profession, especially one where you’re mixing hard core science with empathy and human touch,” she said. “I can see the mental hooks. To try to see the world through the eyes of an Israeli is a powerful exercise, to try to step into someone else’s shoes and see the world through their eyes is so important. Through language, I am teaching my brain to grapple with things I don’t understand. I am also learning to think about the world in a new and different way.”