“This has not been a year anyone would have wished for. Nonetheless our students did it with grace and thoughtfulness. I could not be more excited for this group of Jewish leaders who are going off to lead congregations, hillels, and Jewish institutions. They will make an enormous contribution to the Jewish future.” — Rabbi Dan Judson, dean of the Graduate Leadership Programs

After an unconventional year of study, Hebrew College’s Class of 2021/5781 will graduate on June 6 with Biblical and Talmudic knowledge, as well as a first-hand mastery in areas of resilience, flexibility, and compassion. The graduates, who completed their final year-and-a-half of coursework online, will go on to work in Reform and Conservative synagogues, hillels, and pastoral care settings across the United States and Canada.

During Commencement, Hebrew College will bestow honorary degrees on Rabbi Nancy Flam, a pioneer in the field of Jewish healing and contemporary spirituality, and Melila Hellner-Eshed, a senior research fellow at the Shalom Hartman Institute, both of whom will offer messages to the graduates at Sunday’s ceremony.

“Thank you to all of my teachers for giving me the tools to live Torah, and for being deep models of Jewish seekers, said rabbinical ordainee Tyler Dratch who will be Rabbi for Tefilah Leadership and Director of Youth & Family Education at Beth Am Synagogue in Baltimore.

“In becoming a rabbi, I am indebted to all my teachers, who, each in their own way, introduced me to the rabbinic imagination and invited me into a more than two-millennia-old conversation around meaning-making,” added Dena Glasgow, former director of faculty and curriculum development in the adult learning division at Hebrew College and a future teacher at Gann Academy in Waltham, Mass. “ I am incredibly grateful to the wonderful Hebrew College community of students who nurtured me through their warmth and creative expressions of Judaism.”

Placements include Samuel Blumberg as rabbi at Temple Beth Am in Framingham, Mass.; Amalia Mark as Director of Programs and Partnerships at Mayyim Hayyim Living Waters Community Mikvah in Newton, Mass.; Shoshana Rosenbaum as a faculty member and beit midrash instructor at Hebrew College; Max Edward as associate rabbi of Temple B’nai Abraham in Livingston, N.J.; and Justin Held will be Director of Jewish Education at the University of Minnesota Hillel and Herzl Camp in Minneapolis, Minn. Cantor Ken Richmond, cantor of Temple Israel in Natick, Mass., will become a rav-hazzan. 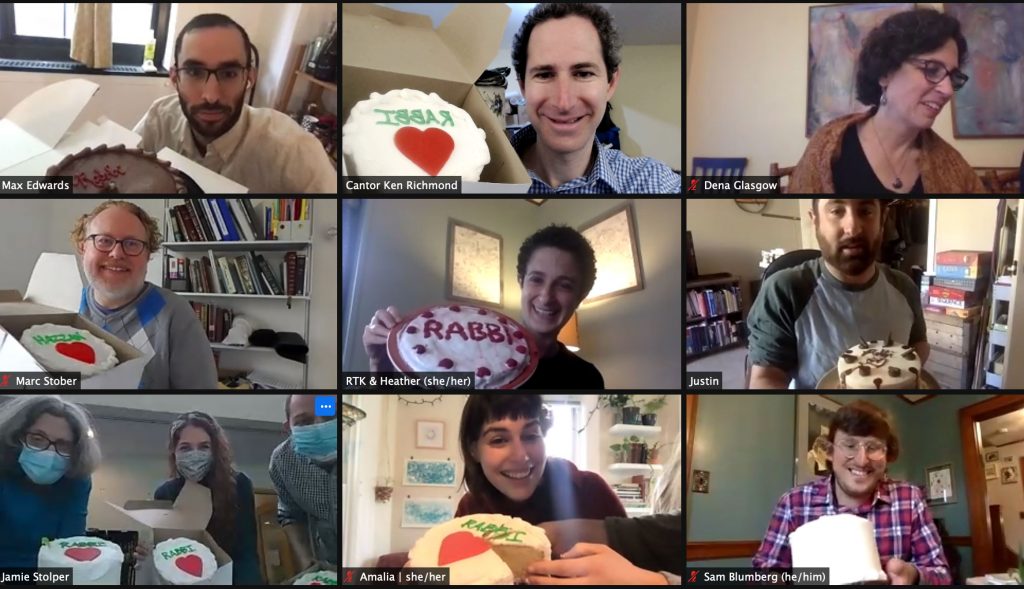 “At long last, we the Hebrew College Rabbinical School Class of 2021, are being ordained!” the rabbinical students said in a statement. “During our time at Hebrew College, we’ve made an investment in learning together, working alongside each other, and growing as Jewish leaders. We’ve had the opportunity to learn from extraordinary teachers in a diverse and pluralistic community. We are grateful for our friends, family, and everyone who has supported us throughout our years of learning.”

“We are privileged and thrilled to be on the cusp of officially being called ‘Cantor,’” the cantorial students wrote. “We have been supported by the Hebrew College community, our families, friends, and colleagues. We are grateful to have had the opportunity to learn from and with amazing faculty, students and within the communities where we have interacted and worked.”

>>GIVE TO THE RABBINICAL CLASS OF 2021 SCHOLARSHIP FUND

>> GIVE TO THE CANTORIAL CLASS OF 2021 SCHOLARSHIP FUND

Read more about Commencement and Ordination, our honorary degree recipients, and how to watch the livestreams on the Commencement web pages here.