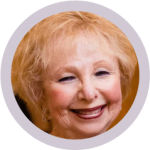 Halfway through Me’ah, Hebrew College’s 2-year, 100-hour adult education program, Myra Snyder mustered up her courage and walked into Hebrew College on Hawes Street in Brookline, Mass., to ask about enrolling in a graduate course.

A recently retired health professional, Myra was taking Me’ah at her synagogue, Shir Tikva in Wayland, Mass. While she craved intense Jewish learning, she hadn’t been in a classroom in decades.

“I walked in the door of Hebrew College and they embraced me with, ‘It’s okay that you haven’t been in school for 30 years. We will show you the way. Why don’t you start with one course?’” Snyder said. “Before I knew it, I had matriculated into the master’s program and I was just absolutely taken in—I had no other life. My kids were grown, I just wanted to study and learn, and make up for the time that I had missed in my early childhood. I was studying at Hebrew College and doing Me’ah simultaneously. I just couldn’t get enough.”

Snyder grew up attending Sunday school at Ohabei Shalom, a reform temple in Brookline, and heard a lot of yiddishkeit from her grandparents and great-grandmother, but her Jewish education was limited. She was focused on math and science. After her children were grown, she decided to have an adult bat mitzvah with a group of women at Congregation B’Nai Torah of Sudbury. And afterwards she wanted more. “I was initially drawn to Hebrew College because I felt I missed a Jewish education,” she said.

Snyder says she found that Jewish education at Hebrew College, and along the way, through her studies, she also discovered a deeper appreciation for her family background, especially the struggles of matriarchs. She wrote her master’s thesis on women’s devotional prayers, tkhines, in an attempt to better understand women of the turn-of-the-twentieth century who were excluded from prayer and formal Jewish education. She was grateful that she had the opportunity to learn.

Nearly 20 years later, Snyder hasn’t left Hebrew College. She remains a committed student and volunteer. She is currently taking Hebrew and text study courses. She is also a member of the Board of Trustees and committee co-chair for Hebrew College’s Capital Campaign, “Branching Out, Building Together.” On May 2, Hebrew College will celebrate and honor Snyder, along with fellow campaign leaders, for her dedication and commitment to the College at the College’s Virtual Spring Event, “What Makes a Community?”

“Hebrew College is my life—it is my home,” she said. “I continue to study and will continue to be a lifelong learner for many years to come. Hebrew College has made me so enthusiastic and so excited about learning. When people ask me what I do, I joke, ‘I’m taking four classes and raising $10 million for the Capital Campaign. I’m all in. It’s just wonderful.”

Snyder, a member of the first graduating class at Hebrew College’s Newton Centre campus, is thrilled to be helping Hebrew College embark on its next move to a new shared campus in Newton, Mass. She’s no stranger to new Jewish building initiatives, having founded two synagogues in the western suburbs of Boston with her husband, Robert: B’nei Torah in Sudbury and Shir Tikva in Wayland, and helped to found MetroWest Jewish Day School in Framingham, Mass.

“The Jewish community in Boston is vibrant, and Hebrew College’s new shared campus with all our wonderful Jewish organizational partners will create new opportunities,” she said. “We will be stronger as a result of this collaboration.”

Join the Hebrew College community on May 2 from 5-5:30 p.m. when we honor Diane Troderman and four other visionary leaders at our Virtual Spring Event. Information and reservations are available here.