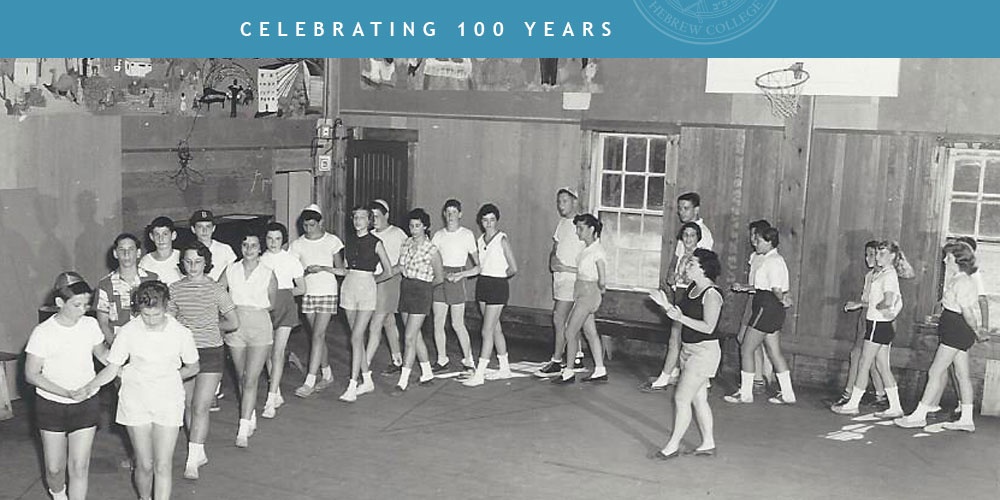 (Above: Marsha dancing the ulom at Camp Yavneh)

Growing up in West Newton, Mass. in the 1950s, Marsha (Mikki) Wittenberg, now Lewin, was one of only a few Jews in her junior high school. She felt like an outsider.

But on Hawes Street in Brookline, she felt at home. 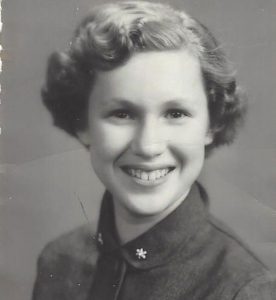 “My comfort zone came at Hebrew College. I was with like-minded people, with similar interests,” she said. “There was something very safe about Hebrew College, even if you had to go on the MTA to get there.” (Right: Marsha at 14 years old.)

After classes ended at Newton High School, Lewin took the bus to Hebrew College. She would stay there all evening on Monday through Thursdays, learning, studying, and hanging out with friends, often not getting home until 10:30 p.m. Her parents were “overprotective,” she said, but because their friend’s daughter traveled to Hebrew College, she was allowed to go too.

Not only did she learn Hebrew and Jewish studies at Hebrew College—she developed values and friendships that have stayed with her throughout her life. She still has many friends from Hebrew College, along with many wonderful memories. Many of her Hebrew College classmates also attended Camp Yavneh with her during the summers.

“I learned that I didn’t have to be just serious. I could be funny too,” she said. “I had interesting teachers, wonderful friends, and obviously I’ve stayed connected to the Jewish community and my heritage. That’s what is perhaps important about what we do as children, creating a backlog of nice memories and associations that we can get strength from throughout our lives.”

Lewin left Boston to attend Barnard College in New York, and later moved to Los Angeles, where she received a Master of Science degree in Computer Science from West Coast University, and a Master of Business Administration degree from Pepperdine University’s Presidential Key Executive Program. She designed computer systems for the stockbrokerage industry in the 1960s, and then went out on her own as a management consultant, leading Marsha D Lewin Associates, Inc., the first women-owned firm to make it to Consultant News’ “Top 100 Management Consulting Firms.” She was the first woman to be awarded a Fellow of the Institute of Management Consultants; and the first woman to receive The Institute of Management Consultants’ Lifetime Achievement Award, given in recognition of outstanding service and exceptional contribution over a sustained period of years to the management consulting profession. She is the author of The Overnight Consultant, The Consultants’ Survival Guide, and other books and articles, and was the Editor-in-Chief of the Journal of Management Consulting.

In addition, she has always stayed involved in the Jewish world. She has served on Los Angeles synagogue boards and committees and supports Jewish charities. She sings maftir at her synagogue on the high holidays and throughout the year, speaks conversational Hebrew with a friend once a week, and leads a Zoom Torah study group. 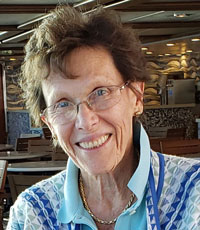 “I have great gratitude to Hebrew College. I know that we are part of the fabric of America. Hebrew College formed me as a Jew, human being and a woman. It taught me that if you live, you live your life with purpose.”

She added, “The support that I got from my friends and my teachers at Hebrew College enabled me to do wonderful things with my life, so I think it’s great to give back. It’s just that simple. “If there’s somebody who can get the same feeling of support and chavruta, friendship, and belonging, then the money is well spent.”

She’s especially excited about Hebrew College’s new shared campus in West Newton. She believes that the robust interdisciplinary offerings and innovative connections that will grow out of Hebrew College’s partnerships with Temple Reyim, Mayyim Hayyim Living Waters Community Mikveh and Education Center, Kesher Newton Jewish Afterschool Program, Zamir Chorale of Boston, the Jewish Arts Collaborative, the Jewish Women’s Archive, Keshet, the Massachusetts Board of Rabbis, and RUACH/ Breath Lab will empower future generations— just as she and her classmates were inspired at Hebrew College High School in the 1950s.

“In the 1950s, post-war America, Hebrew College was a training ground for generations of empowered Jewish young men and women who became leaders in business and professions, as well as Jewish and secular education,” she said. “Enabling the next generations of young Jewish students and campers to succeed—is why I included Hebrew College in my will.”