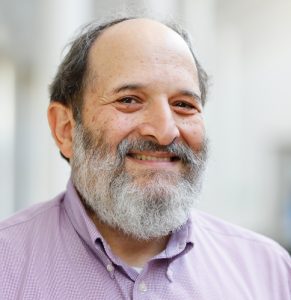 The Beit Midrash is at the nexus of Hebrew College — it is where rabbinical students study together with their chavruta partners, engage in communal prayer and celebration, and grow as individuals and leaders. At its center sits Rabbi Allan Lehmann, surrounded by students asking questions, seeking advice, and listening intensely to their mentor and friend.

Rabbi Lehmann has been co-director of Hebrew College’s Beit Midrash, along with Rabbi Shayna Rhodes, Rab`08, for 10 years. A former congregational and Hillel rabbi, Lehmann has been at Hebrew College for 13 years, and also serves as associate dean of the Rabbinical School, teaches several courses, and coordinates the school’s spiritual direction program.

Next month, on December 5, Rabbi Lehmann will be honored by Hebrew College at a celebration marking his 70th birthday and supporting Rabbinical School scholarships. He turned 70 on October 27.

“Seventy-year-old people often retire, but I have no desire to. I love my work and I love Hebrew College,” he said. “Think about how many people on this planet get to do work that they care about, that they find meaningful, that they find interesting, that they’re drawn to. I have been very, very privileged — to do what I love, and now to be able to work with people who are exploring that as their work for their lives.”

Rabbi Lehmann decided that he would become a rabbi when he was about 5-years-old, because he “loved and gravitated towards all things Jewish.” Six decades later, he still loves his chosen profession — mentoring students, teaching Torah and Talmud, studying and learning, being part of the community. His favorite part,” he says, is “whatever work I’m doing at the time.”

“One of the things that rabbis get to do is to be generalists,” he said. “My own study interests, my own interpersonal interests, are all over the place, and it fits very well with the kind of work that I get to do and I want to do. It’s the interface between the ideas and the people. I love getting lost in books, but I would find it very very frustrating and lonely to not be involved in sharing that with others and with community. For me, it’s about loving the Jewish people, about loving Judaism, about loving Torah, and about loving the search for deeper meaning.”

Lehmann grew up in New Orleans, where he still considers home, and studied as an undergraduate at Columbia University and the Jewish Theological Seminary in New York. After college, he moved to Boston to be closer to his girlfriend, now wife, and got involved in Havurat Shalom, an egalitarian countercultural Jewish community in Somerville focused on “do-it-yourself Judaism.”

As a member of an alternative community that resisted rabbinical leadership, Lehmann felt torn about his lifelong desire to become a rabbi, but he pursued his passion nevertheless. He went on to receive his rabbinic degree from the Reconstructionist Rabbinical College, and then served as the rabbi at B’nai Israel, a conservative synagogue in Gainesville, Fla., for 21 years, and chaplain at Brandeis Hillel for seven years.

While he was at Brandeis, Lehmann’s friend Rabbi Arthur Green founded the rabbinical school at Hebrew College. Lehmann remembers thinking “if I ever retire from Brandeis, maybe I could spend time at that rabbinical school, just sitting in the Beit Midrash and studying torah and making myself useful.” So when Rabbi Green and Rabbi Sharon Cohen Anisfeld, then dean of the Rabbinical School and now President of Hebrew College, asked him to join the faculty, he was thrilled. A few years later, he became co-director of that Beit Midrash.

“The pluralism of the rabbinical school has always been part of who I am and what I’m about,” he said. “Had this program existed in the ‘70s, this would have been where I wanted to be.”

In looking back, Rabbi Lehmann realizes that in becoming a rabbi, he was finishing the journey of his father, a refugee from Germany in 1937, who arrived in New Orleans in 1941 via France and Brazil, and planned to pursue his passion for Judaism. While his father ended up going in another direction, he fulfilled that goal.

“Abraham was also continuing his father’s journey. In chapter 11 in Genesis, it says that Terah and his three sons left to go to the land of Canaan and got as far as Haran,” he said. “Everybody is figuring out how they’re separating themselves from where they come from and doing their own new things, and also continuing a journey that started long before them.”

In a similar light, he may have inspired his own sons to pursue the rabbinate. His older son, Rafael, passed away 10 years ago while in his fifth year at the Jewish Theological School. His younger son, Eliezer, graduated from the Hebrew College Rabbinical School in 2017, and is now Campus Rabbi and Jewish Chaplain at Boston University Hillel.

Rabbi Lehmann says his sons saw how much joy the rabbinate has brought to him throughout his life. When his wife, Joanne, asked Elie why he was pursuing the rabbinate, he responded: “Life is too short to not do what you love.”

Elie Lehmann says he’s proud that Hebrew College is recognizing his father for the role he has played in educating and inspiring more than 100 rabbis who have gone on to make an impact in communities throughout the country and around the world.

“I’ve been learning from my father my whole life,” Elie Lehmann said. “Seeing the excitement and skill that my dad brought to teaching and learning and building Jewish community in synagogue life, in campus life, and in other communities were things that I grew up with, and surely influenced my life’s passions. I’m proud of him. I’m still inspired by him, I still learn from him, and look to him for wisdom and advice in my work.”

If you would like to make a gift to support Hebrew College rabbinical scholarships in honor of Rabbi Lehmann’s 70th birthday, please use our secure online gift form (and choose rabbinical scholarships) at hebrewcollege.edu/give-now or send a check to Hebrew College, Office of Advancement, 160 Herrick Rd., Newton Centre, MA 02459 and note “In honor of Allan Lehmann” in the memo field.