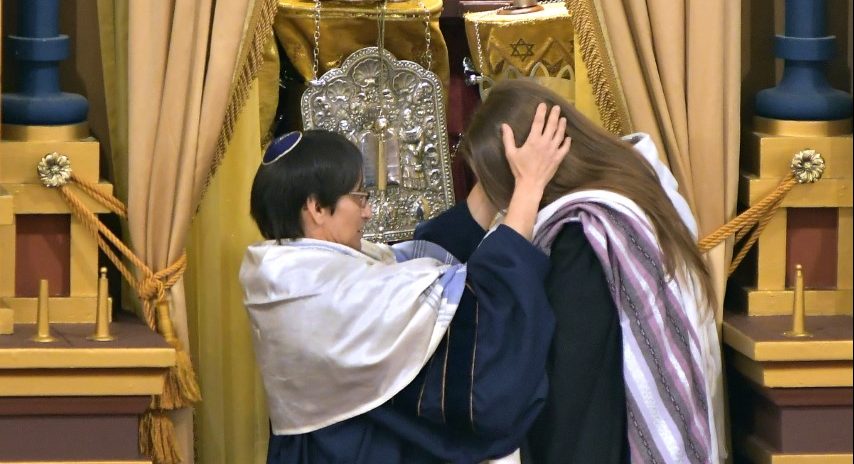 The first time someone told Rabbi Jordy (Cohen) Callman that she was going to be a rabbi was at Hebrew College Prozdor.

It happened during Moreshet, Prozdor’s 12th grade leadership program, when Rabbi Seth Bronstein, then director of Havayah and Moreshet, was talking about prayer. “I said, ‘Every time I pray, it’s a little bit different,’” Callman said. “And he said, ‘you should really be a rabbi.’”

Callman forgot about the remark for a few years, beginning a college program in audiology; but after getting involved in Hillel, she realized that Rabbi Bronstein was right. The rabbinate was calling. 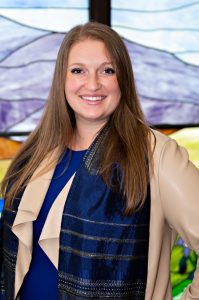 “I was at a big Jewish conference in New Orleans and I looked around and I said, ‘I need to be in this world. This is where I’m at my best. This is where I have something to give.’ I was missing the atmosphere I had at Prozdor.”

Callman had been passionate about Jewish learning since childhood. When only four kids showed up for her post-b’nei mitzvah class at Temple Beth David in Westwood, she found Prozdor, convincing her parents to drive her twice a week from Medfield. And she loved every minute.

“It was a huge time commitment. I did the six hour program. Prozdor was at least a half hour from my house,” she said. “It was really my first serious Jewish learning, my first foundation in Jewish study in any way shape or form, my first exposure to so many different kinds of learning. And I loved it. I am a rabbi now.” 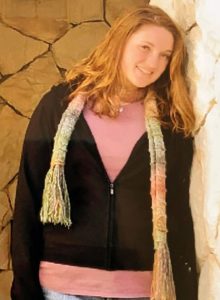 Callman attended Prozdor from eighth through eleventh grade, graduating in 2009, while spending a semester of high school in Israel (Photo, left). She then continued for Moreshet. She was also involved in NFTY, The Reform Jewish Youth Movement, and joined USY, the youth movement for Conservative Jewish teens, because of Prozdor friends.

“At Prozdor, there were a lot of Newton South and Newton North kids and there were a lot of kids like me who came from places where there weren’t a lot of Jewish students. We got to come into this really Jewish space, which was really exciting. That space was really important to me as a teenager, when I was finding my space in the world.” 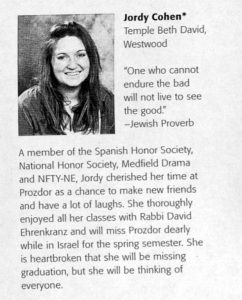 Callman says she continues to pull from what she learned at Prozdor, often quoting lessons from Rabbi David Ehrenkranz, for whom she served as a teaching assistant (see Callman’s graduation entry, right). Prozdor was also her foundation in Hebrew, helping her pass her language test to get into rabbinical school, and place into the top Hebrew level as a rabbinical student.

Callman graduated from the University of Pittsburgh with a degree in Religious Studies, where, she says, “half of my education was in the university and half of my education was in the community.” During college, she worked throughout the Pittsburgh Jewish community, learning even more about the Jewish communal landscape and identifying where she fit best. She went on to attend Hebrew Union College-Cincinnati and is now the Assistant Rabbi at Temple Sinai in Denver.

A few years ago, when Callman was approaching ordination, she says she reached out to Bronstein to tell him how he influenced her life.

“He was really thrilled that I had said something. It was a really nice moment,” she said. “There is so much from my Prozdor time that was foundational in getting me to this point. I don’t know if I would be a rabbi if I hadn’t been at Prozdor. I’m really lucky that I do something amazing and I love what I do. I do think Prozdor was a foundational step in that process.”