Centennial A legacy of Jewish learning

“Be a tail among lions, rather than a head to foxes.”

“All things are foreseen, but still free choice is given.”

“Words are like arrows. Once shot, they can’t be retrieved.”

The quotes, he says, remind people of the importance of taking personal responsibility—to strive to be better by seeking out individuals who can teach you (to be the lion’s tail rather than his head); to think before you speak (and the arrow is shot), and to make good choices (with free will). All three, he says, are relevant to his work as a weight loss surgeon. 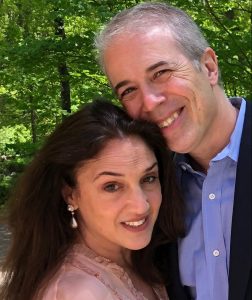 “My patients succeed to the extent that they take responsibility. While God may have ultimate and supreme knowledge of our human experience and potential, God still grants that we make our own choices and live with our decisions,” he says. “It was true in Gan Eden and it remains true wherever we are in the world today.”

Glagow took responsibility for his own future when he enrolled at Hebrew College Prozdor in 1980. At the time, he was a camper at Camp Yavneh in New Hampshire, founded in 1943 to extend the usage of Hebrew language beyond the walls of the then-Hebrew Teachers College. One summer, he was told that if he wanted to become a counselor, he had to speak better Hebrew.

“I took that message very seriously,” said Glasgow, who grew up attending Temple Beth David in Westwood, MA. “I came home to my folks and said, ‘I have to go to Prozdor to improve my Hebrew.’” He started attending Prozdor twice a week, on Sunday mornings and after weekday classes ended at Newton South High School, taking the streetcar from Newton Center to Hebrew College on Hawes Street in Brookline.

Glasgow says he “feared and respected” his Prozdor teachers but became so comfortable with his Hebrew that a few years later, he performed the musical “Oklahoma” in Hebrew with his classmates. By his last year at Camp Yavneh, he said, he was able to join the advanced Hebrew language class, filled with campers who had attended Jewish day schools. “I’m still hanging out with the Schechter and Maimonides guys that I met there. They made having a strong Jewish education cool, and it made me hungry for more. Prozdor helped me achieve my Hebrew speaking goal. I credit Prozdor with a lot of my Jewish identity.”

And while Glasgow came to Hebrew College Prozdor to perfect his Hebrew, he discovered Jewish ethics in the process. In addition to the Pirkei Avot quotes, he often thinks about a teaching he learned about a man coming to First Century Scholars Rabbi Hillel and Rabbi Shamai, proclaiming his willingness to convert if they could teach him the entire Torah while standing on one leg. While Shamai sent the man away, Hillel said, “What is hateful to you, do not do to your neighbor. The rest is commentary. Now, go and master it.”

“Sadly, my patients are often subject to discrimination and cruelty. If more folks remembered to love their neighbor and to speak kindly to them, what a decidedly better world it would be,” Glasgow said. “I could go on and on about how and why I derive strength and inspiration from Pirkei Avot. I just love that 2000-year-old wisdom is still applicable today.”

Glasgow says that Prozdor has become part of his family’s identity. Jordana “Jody” Berkowitz, his high school sweetheart and now-wife, also attended Prozdor, as well as Camp Yavneh (photo above:  Glasgow and Berkowitz at Prozdor dance in early-1980s). His mother-in-law, Margie Berkowitz, was the Camp Yavneh Director when he was a camper and later served as the Director of Prozdor.

“Our sons have Jewish learning embedded in their history. Jordana and I raised them to know how important it was to us as teenagers and even more so as parents. My kids went to day school, one of them went to Yavneh, another is now active in CJP, and both went on Birthright Israel,” he said. “They know that mom and dad went to Yavneh and Prozdor, and that their grandparents met at Yavneh too. Their grandmother also ran Prozdor for several years. It’s in their DNA.”