Appreciating the Other: An Ethic of Love 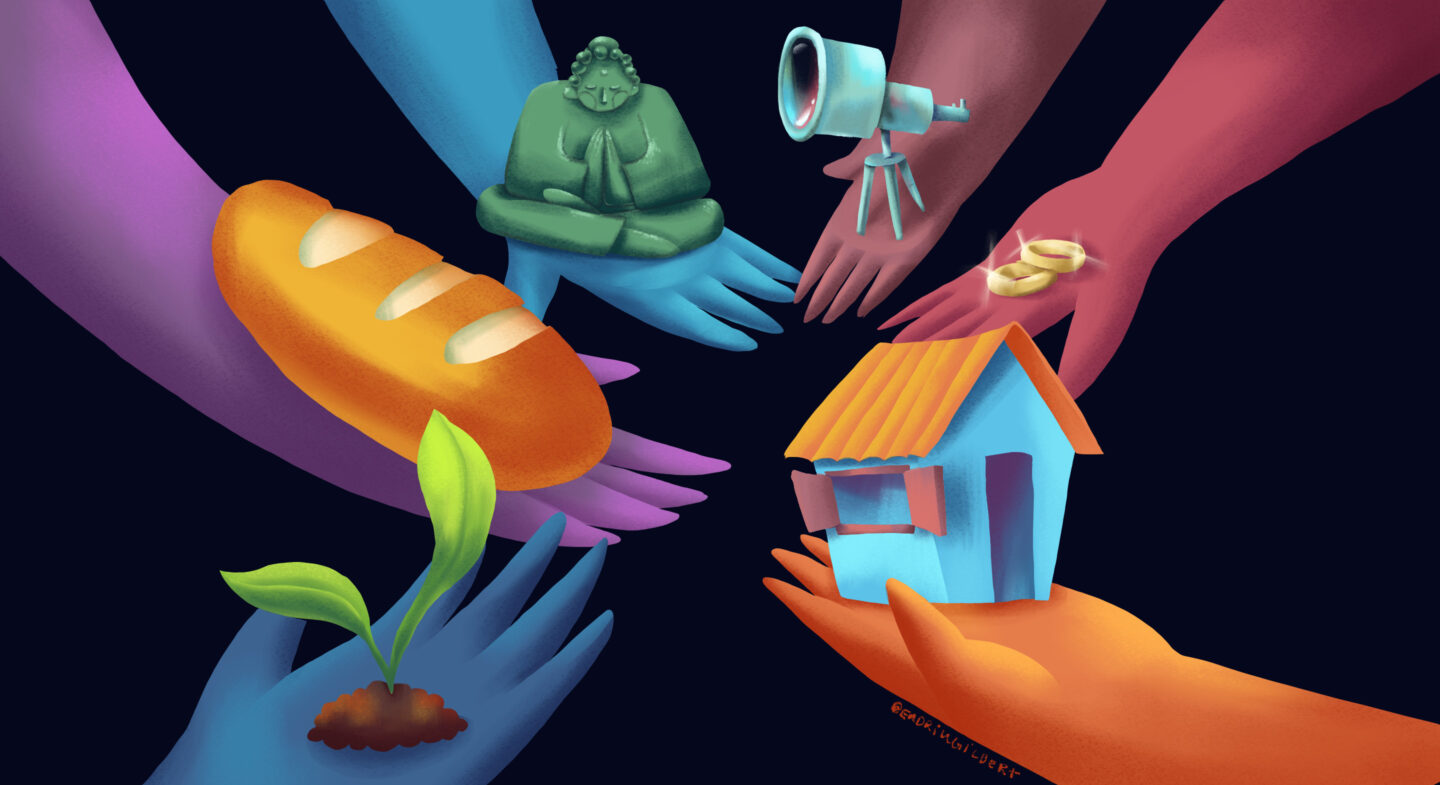 Oh, to see without my eyes

The first time that you kissed me
Boundless by the time I cried I built your walls around me…
Hand of God, deliver me

Oh, oh woe-oh-woah is me
The first time that you touched me
Oh, will wonders ever cease?
Blessed be the mystery of love.

These songs can both be seen as an expression of “radical love.” In a 2018 interview about his newly published anthology Radical Love: Teachings from the Islamic Mystical Tradition, Omid Safi comments on the meaning of his book’s title. When asked about interreligious synergies or connections with sufi mystic thought Safi states:

“It’s the same tradition of radical love that you get from a Martin Luther King Jr., from a Bishop Curry or a Valarie Kaur or a Rev. William Barber or a Rabbi Abraham Joshua Heschel.

That’s not to say that these are all interchangeable. They all have their distinctiveness. MLK was a Christian lover. Rabbi Heschel was a thoroughly Jewish mystic. And I hope that the voice I’m bringing here is an unmistakably and distinctly Muslim voice. But there is something bold and fierce about all of these voices. One of the common threads is the realization that if you claim to love God, you have to love humanity. If you claim to love God, you cannot stand silent when you see humanity suffer.

That same tradition of sacred love compels you to rise up and act when you see injustice and suffering in the world. In that sense, it’s that same love tradition that, when it enters the public, we see and recognize as justice — and when it moves inwardly, we recognize as tenderness. We can be extraordinarily tender in dealing with people in our lives, but extraordinarily fierce in denouncing injustice in public.”

Lady Gaga’s “Born This Way” describes a vision of radical love where we are all accepted and loved for who we are. Sufjan Stevens’ “Mystery of Love” comments on the ineffable nature of this love. What does it mean to have this vision of love in pop music? Is it empowering? Is it limiting? Is it trivializing?

An example of radical love in the interreligious arena can be found in the work of several pluralistically minded Catholic thinkers in the West who have sought to re-evaluate Christian thought on the Prophet Muhammad, the final prophet according to Islam. Hans Küng, the Swiss Catholic priest mentioned in Unit 2, was the first amongst them. In his 2007 book Islam: Past, Present and Future, a 1,000 page systematic introduction to Islam, Küng calls for a Christian recognition of the Prophet Muhammad as a prophetic figure for Christians as well. Rice University sociologist Craig Considine has written several books on Islam, Muslims, and Christian-Muslim relations that are part of a larger effort intended to combat Islamophobia and build a world of peaceful engagement across creeds.

Watch this eight-minute video about his 2021 book People of the Book: Prophet Muhammad’s Encounters with Christians with the following questions in mind:

The Face of the Other

Faces tell stories and are a source of meaningful connections between people. The old film-school cliché “The close-up is the most dangerous weapon in cinema” still rings true. When a face is seen so intimately up close on the big screen, the face can feel real. The final shot (below) of mainland Chinese director Jia Zhangke’s A Touch of Sin is not, technically speaking, a close-up, it nonetheless demonstrates the power behind the cliché. Even removed from its original cinematic context, this image, a collection of faces, tells a story.

Exercise: Images and the Power of Faces

Sit with and reflect on the image, the final shot of A Touch of Sin for a few minutes. What stories do you see? What faces stand out to you? What kind of movie do you imagine A Touch of Sin is? Did the frame maintain your attention longer than a typical image with one or two faces would?

Emmanuel Levinas, a Lithuanian-French Jewish philosopher, a man who experienced and witnessed the worst violence imaginable during the Nazi Holocaust, recognized something about the faces of others. “The first word of the face is ‘Thou shalt not kill,” he famously stated. In an interview, he elaborates on his ethical teachings as they relate to the other:

God cannot appear as the cause or creator of nature. The word of God speaks through the glory of the face and calls for an ethical conversion, or reversal, of our nature. What we call lay morality, that is, humanistic concern for our fellow human beings, already speaks the voice of God. But the moral priority of the other over myself could not come to be if it were not motivated by something beyond nature.

The ethical situation is a human situation, beyond human nature, in which the idea of God comes to mind (Gott faellt mir ein). In this respect, we could say that God is the other who turns our nature inside out, who calls our ontological will-to-be into question. This ethical call of conscience occurs, no doubt, in other religious systems besides the Judeo-Christian, but it remains an essential religious vocation. God does indeed go against nature, for He is not of this world. God is other than being.

Faces matter in the American judicial system too. Consider how race, signaled through skin color, impacts sentencing. We are all influenced by implicit racial biases, judges are no exception to this all too human phenomenon which, as a Cornell Law study found, significantly impacts the sentences handed down. The Constitutional Rights Foundation summarizes: “The RAND Corporation [a global policy think tank] study found that convicted African-Americans were more likely than whites to go to prison. And their sentences were longer.” In the current judicial make-up, judges of racial minorities make up less than a quarter of federal judges and even less at the state level. What role do faces have here?

Consider this teaching about the power of faces from the Hasidic Jewish tradition. The first commandment “I am the Lord Your God” begins with the letter aleph in Hebrew. In the shape of the letter aleph (א) one can see a nose and two eyes. In other words, a face. From this we can learn that the image of God is in each and every face. What might it mean to find divinity, otherworldliness, holiness, or Godliness in the faces of others? How does this relate to the ways we as humans treat and mistreat each other?

Humans share more in common than what sets us apart. We eat, work, play, and love. Omid Safi, an Iranian-American professor of Islamic Studies at Duke University and teacher of Islamic mysticism, deeply believes that the profound love of parents for their children transcends all races, creeds, and nationalities. In his presentation at the 2018 Festival of Faiths, Safi, asks us to consider how far our love extends into the world. Watch at least the first 13 minutes of his presentation and reflect on the question that makes up its title “How wide is your circle of compassion?”

Make Your Own Circle of Compassion

After watching the video, in silence and with eyes closed, think of your circle. Whom do you picture? Do you see specific faces or types of faces? Who falls outside your circle? How or when does your circle expand or shrink?

Now think of the “perfect circle.” Perhaps this is what you imagine the circle of one of your he-or she-roes looks like. Perhaps it’s the circle you hope to cultivate sometime in the future. How does it differ from your existing circle?

Loving Others and Loving God

For God so loved the world that [God] gave [God’s] only Son, so that everyone who believes in him may not perish but may have eternal life.

In many traditions, loving others and loving God are mutually beneficial acts of love; for some it can even be hard or impossible to distinguish the love of God from the love of others. As Safi said in the video above, in the Sufi tradition loving others flows from one’s love for God. Some mystics might add that loving God flows from one’s love for the other too. Many religious traditions, including non-theistic ones, have similar concepts. With this context in mind, sit with the artwork from Endriu J. Andrew Gilbert, a gender-fluid Brazil-based artist whose work is featured throughout our units. 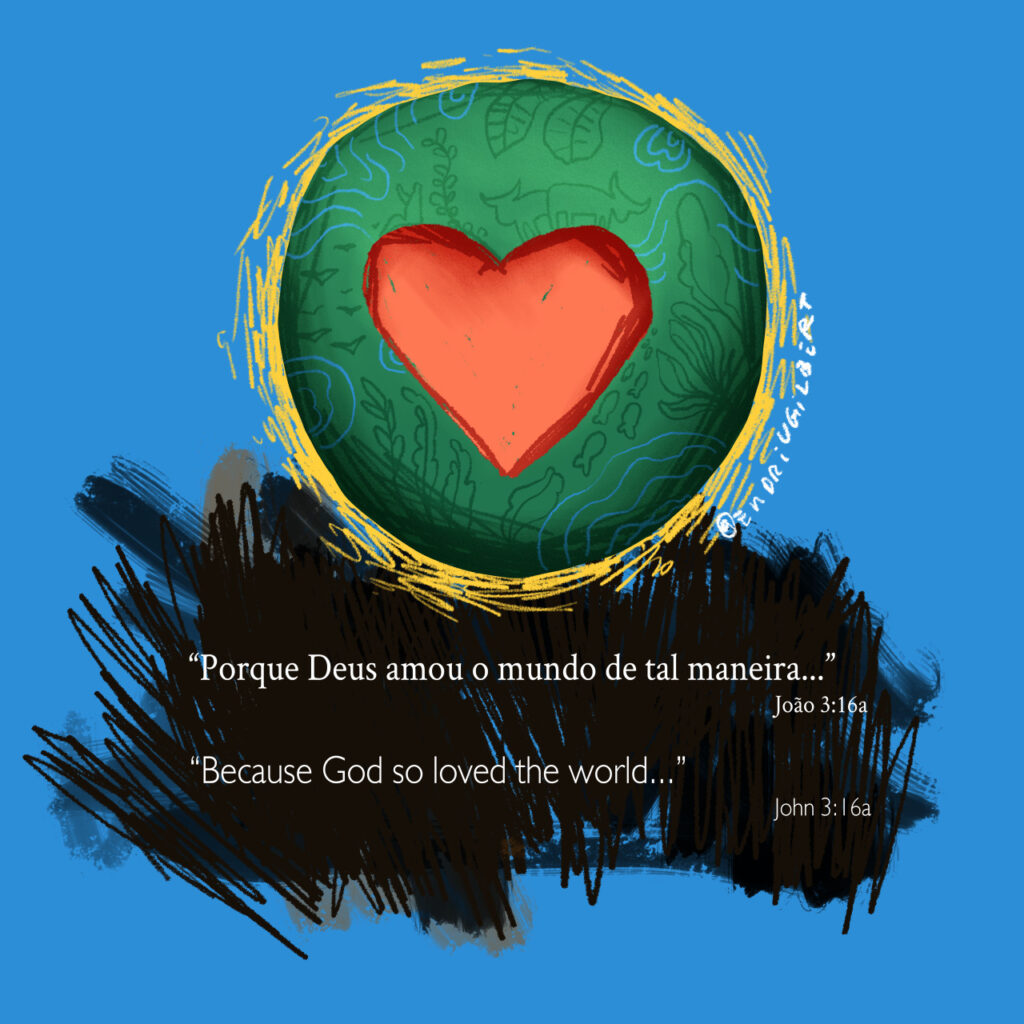 “My faith is pretty small, almost non-existent. But there’s still much of it that comes alongside me and it leaves me dumb-founded.

These days I was feeling down, and this passage that was so often repeated in my childhood came back repeating itself in my mind. And it wasn’t about the second part of this verse, where ‘God gives his only son, so whoever believes in him will have eternal life.’ No. It wasn’t about eternal life. It was about God loving this world. Us. Me and you. Growing up with this it often was a ‘given,’ but the only reason to believe in this love was the eternal life—the fear of death. And not love itself.

But isn’t it strange, weird, bemusing to think of a God, the God, loving this world? Pouring love into it? A God, the God, filled with desire for this world? It made me chuckle. Made me wonder why. Made me feel loved, even if I often wonder how true these words can be.” — Endriu, artist

Read the full passage from the Gospel of John (3:16). If you have a personal relationship with the Gospel of John, reflect on your personal history with the passage. If these texts are not part of your religious or spiritual life or heritage, what are your thoughts after reading the verse, looking at the artwork, and sitting with the artist’s reflection?