November 21, 2021 Time Capsules Under the Rubble: The Ringelblum Archive in the Warsaw Ghetto

Join us for this year’s Heidi Urich Annual Lecture on Jewish Genealogy entitled  “Time Capsules Under the Rubble: The Ringelblum Archive in the Warsaw Ghetto” with Samuel Kassow. The lecture is co-sponsored by the jewish Genealogical Society of Greater Boston and Hebrew College.

During World War II, Jews resisted not only with guns but also with pen and paper. Even in the face of death they left “time capsules” full of documents they buried under the rubble of ghettos and death camps. They were determined that posterity would remember them on the basis of Jewish and not German sources. The Ringelblum archive in the Warsaw Ghetto buried thousands of documents. Of the 60 people who worked on this national mission, only three survived. Professor Kassow will describe life in the Warsaw Ghetto and how this brave group of Jews worked to defend Jewish honor and to show future generations that history actually matters. 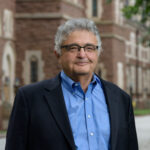 Samuel Kassow, Charles Northam Professor of History at Trinity College, is a leading scholar of the Holocaust and has authored many studies on Russian and Jewish history. His ground-breaking book, Who Will Write Our History: Rediscovering a Hidden Archive from the Warsaw Ghetto, inspired the documentary film of the same name.  Professor Kassow was part of the scholarly team that planned the acclaimed POLIN Museum of the History of Polish Jews in Warsaw. He is currently engaged in a project organized by Yad Vashem to write a history of the Holocaust in Poland. Kassow holds a Ph.D from Princeton and has been a visiting professor at many universities including Harvard, Toronto and Dartmouth.