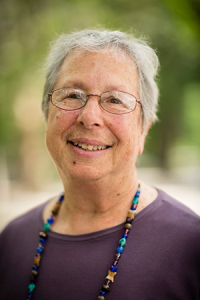 Why is this month (Kislev) different from all other months in the Jewish year? It offers us a holiday (Hanukkah) that (at least in the Northern hemisphere) resists and subverts the natural order. At the darkest time of year, we celebrate light. And the stories we tell to explain our rituals of creating light emphasize the overturning of “natural” expectations. A small band of improvised fighters defeats an imperial army. A tiny supply of light-making material fuels an impossibly long period of illumination. We call these subversions of what nature and experience have taught us to expect -“miracles”- nes gadol hayah sham (a great miracle happened there).

But our familiar stories of Maccabee brothers and Temple lights kindled by priests do seem to reinforce one of our usual expectations: no women are involved.

And yet, a Jewish tradition less familiar to most of us has long been associated with the holiday of Hanukkah, a text from the Second Temple period with an extraordinary woman as its main character- the literary gem called the Book of Judith. Preserved from antiquity in Greek, Judith is one of the major texts of Jewish Apocrypha, ancient books not included in the final canon of the Tanakh. Nevertheless, its extraordinary literary texture is filled with allusions to Biblical narratives that help to build the heroic character of its female protagonist.

The story opens with a stark picture of the land of Israel and its sacred center, the Temple in Jerusalem, threatened by an enormous army under the command of a general named Holofernes. We focus our attention on the town of Bethulia, where its inhabitants can “occupy the passes into the hill country, because they controlled access to Judea, and it was easy to hold up an advancing army, for the approach was only wide enough for two men.”(Judith 4) The “high priest in Jerusalem at that time” looks to the men to hold tight, like the Greek heroes at Thermopylae, to this narrow entrance to the open, vulnerable and infinitely precious space occupied by the Temple. But the men of the town, under siege and without water, become convinced that they must surrender to the overwhelming force arrayed against them.

The Temple, Beit Hamikdash (literally “house” or “home of the holy place”) figures as both symbol and microcosm of the homeland, the household of the people. It creates a tangible place where human connection to God, the source of physical and spiritual life, is made manifest and secured. Its spatial configuration draws our awareness inward toward increasingly private spaces of intensifying divine energy and presence. In the symbolic field of the Temple, moving inside means going both higher and deeper, closer to the divine and to the source of all energy, all life. Penetration of this sacred enclosure requires awe, careful preparation, respect for boundaries, and is limited to legitimate “members of the household.” Yet this very space, in the Book of Judith, is the goal of an invading force which has already violated the outer circle surrounding it, the homeland, Eretz Yisrael. In telling its story of an “Assyrian” general who seeks to destroy the Temple and to require that “Nebuchadnezzar alone should be worshipped by every nation,” (Judith 3) this text parallels the Hanukkah narrative of Antiochus. The story of Hanukkah becomes, through this parallel, the trauma of the invaded sacred enclosure, the Beit Hamikdash and the larger bayit, the homeland that surrounds it.

The language of the Book of Judith invites us to perceive this sacred inner space not only as geographical location, but also as the human core of the Jewish people. As in later rabbinic texts in which the word “bayit” (house or home) is understood to refer to the woman whose place it is, here the bayit of the Jewish people is personified as a virgin threatened with violent penetration. Invasion of the land, destruction of the Temple, is a rape. The town on the hill passes, chosen to defend the narrow, tightly closed access to that vulnerable inner space, is called Bethulia, which resonates with the Hebrew “betulah”- virgin. The land overrun by a huge invading army, the besieged city whose people are so tormented that they are on the verge of opening their gates to penetration, and most especially the Temple, a place whose innermost space is its most lifegiving, are the precious and beautiful woman, the “enclosed garden” (Song of Songs 4:12) violated. Land, people and Temple, the heart of both, figure here as the infinitely vulnerable, virginal female body, with its fragile, narrow opening guarded by increasingly feeble defenses against the overwhelming thrust of the aggressor.

What astonishes us in Judith is the persona of the rescuer. Salvation for the threatened virgin in this narrative comes not through a Maccabee-like warrior, but through a woman. Even more surprisingly, her tools of rescue are not only her faith, brilliant intellect and eloquent speech, but also the femaleness of her body, that very sexuality apparently mobilized in the text to represent vulnerability and victimization. The text, with consummate literary artistry, weaves a tapestry of allusions to earlier narratives found in the Hebrew Bible to create a character who echoes and transforms representations of women as saviors of the Jewish people.

Her name itself, Judith, as many scholars have suggested, seems designed to point to her role as epitome of the nation- Yehudit in Hebrew and ioudeit in Greek- meaning “the Jewish woman.” But this representative function is complicated by apparent contradictions from our first introduction to her. Later Biblical, as well as much Second Temple period literature, frequently personifies the community, knesset yisrael, as a woman, either powerless, suffering victim in need of protection and rescue or faithless wife, straying after other loves. Conventional connotations would suggest that Judith, who is not only woman but widow, constantly in mourning, represents the community through the figure commonly invoked in the Torah for the most vulnerable and needy of humans. In the context of this narrative, we might perceive widowhood at its most extreme, the woman/community bereft and abandoned, about to fall before a ruthless predator.

But this widow, characterized through allusions to both male and female rescuers and leaders (Moses, Joshua, Shimon, Deborah, Rachel, Esther) overturns our usual expectations of the role of the pious widow, relying only on the power of prayer, however eloquent. She takes on the role of protector-rescuer, who will “go out” to save the people. (Judith 8) The constant reiteration of Judith (and her female servant) going out (from Bethulia and then, back and forth from the enemy camp), highlights the pattern of reversals in this book. In Tanakh the phrase that designates a military leader is “one who goes out before the people.” Here male warriors wait helplessly inside the walls, while the “weak” woman goes outside the walls to the open space of danger. Through her action, the enemy “lord” who expects to “achieve his ends” is defeated by another “lord,” the God he has held in contempt. (Judith 11:6) The “head” of the vast army literally and figuratively loses his head to a mere woman. Judith may, like Yael (Judges 4-5), kill the enemy general in a tent, but in this story it is his tent, his “inside,” while she comes from “outside.” She invades the space of the invaders.

Yet she is portrayed as imbued with a prophetic humility, an awareness of human action as mere instrument of the God who protects the desperate, very much in the mode of the chapter from Zechariah chosen by the Rabbis as a Hanukkah reading (“Not by might, nor by power, but by My spirit- said the Lord of Hosts” Zechariah 4:6). We may see her as another Esther, taking off her clothes of mourning and dressing “so as to catch the eye of any man who might see her,” (Judith 10:4) just as Esther puts on “malchut”- royal garments or “royalty” (Esther 5) to stand up to Ahasuerus. But Judith is even more like the young David, so boyish and beautiful (feminine) that he arouses the scorn of the enormous enemy, Goliath. Yet he confidently declares himself the instrument of the Lord of Hosts: “For the battle is the Lord’s who will deliver you into our hands.” (1 Samuel 17)

Judith is a story of expectations transformed. The use of a female character as both symbol and literal embodiment of the community of Israel has a long history in Jewish texts by the time of the Book of Judith. But the transformation of that female body from victim to rescuer suggests a more radical message. The female body, for centuries the symbol of the community as victim of oppression, becomes the means of rescue. Judith prays that God’s power (yad chazakah- literally “strong hand”) manifest itself through “a woman’s hand” (“shatter their pride by a woman’s hand” Judith 9:10). Standing “outside” holding the enemy’s head in her distinctively female hand, she symbolizes a human community which can mold its vulnerability and apparent powerlessness, its “femininity,” into resources of strength. Her presence, startling us into awareness of God as the God of surprises, brightens the Hanukkah lamp we place in our homes at the meeting point of inside and outside.

(for a fuller discussion of the text, see my essay, “Judith, the Hidden Heroine of Hanukkah” in A Different Light: The Hanukkah Book of Celebration ed. Noam Zion and Barbara Spectre)