Eight years ago I wrote a short d’var Torah for Shmini Atzeret. The topic was rain. Highlighting the theme that we’re not quite as powerful as we think, which is at the center of Sukkot and Kohelet, I wrote, “when it rains, it rains, and when there’s sun, there’s sun, and, for the most part, there’s not a thing in the world we can do to change that.”

My wife, Sarah, an educator and advocate in sustainable energy at MIT, and my daughter, Elie, an environmental activist, have taught me a lot about the impact of the warming of the climate on our ecosystem. I know by now that we actually have immense power to influence our climate, including rain.

Questions of human power in relationship to the earth and water are at the center of ancient rabbinic texts on Sukkot. In the agrarian society in which our tradition emerged, religious ritual was connected to the cycles of the bounty of the earth. During this time of year, particularly for those finishing their summer harvest, trimming perennial plants, and waiting for the rain to moisten the soil and strengthen the roots in their fields, rain was at the center of their thoughts and prayers.

At the end of Sukkot, during Shemini Atzeret, we add a verse to the second blessing of the Amidah called “gevurot geshamim,” meaning the power of rain. The verse—“mashiv ha’ruach u’morid hagashem”—offers praise to God for the blessing of rain.

In mishna Taanit, our ancient rabbis debated the timing of adding this verse to the Amidah. Rabbi Eliezar taught that we should add these words from the first day of Yom Tov Sukkot. Rabbi Yehoshua disagreed: no, we should begin to praise God for rain on the last day of Sukkot, as rain during Sukkot would be a “siman k’lalah”—a curse on the festival; it would prevent us from dwelling in our sukkah. (A parallel teaching in mishna Sukkah adds a humorous but unnerving image: rain during Sukkot is like a servant who comes to fill a cup for his master and the master pours the ladle in his face).

When Rabbi Eliezar clarified that he was not referring to prayer requesting rain, but rather praising God’s power to bring rain, Rabbi Yehoshua was ready with a response: if so, we should say this prayer all year long! No, gevurot geshamim should only be said when rain is actually a blessing. I tend to agree, particularly during Sukkot.

But our mishna goes on to present a more serious problem than rain falling during Sukkot: what happens if the rainy season commences and the rains never come? What then?

What is this about?

First, there is a clear practical concern: fasting preserves the resources of the community. Mirroring the narrative of Joseph in Egypt, the community cuts back on its consumption of the resources it will need in case of sustained drought.

Second, there is a reaffirmation that religious ritual, including fasting and prayer, have meaning and purpose in sustaining the community. While our theology of prayer has grown over generations, this is a time of year when we’re called to the possibility that prayer can change us. The biblical stories of Hannah and Jonah, two of our haftarot during the Yamim Noraim, reveal prayer to be transformational: after Hannah prays, she conceives, and after Jonah prays, he is re-birthed into the world from the belly of a fish. At the very least, their prayers enter both Hannah and Jonah into new spiritual realities.

Lastly, it’s telling that the Court decreed full communal fasts. I imagine members of the community coming together, seeking solace in one another, sharing experiences, praying, and relying on their collective strength.

We know much more now, of course, about our power to affect the rains and the earth. To prayer, fasting and preservation of resources, we add buying less, purchasing sustainable products, eating plants, conserving energy, composting, recycling and reusing. But to live in the kind of relationship with the natural world that Torah and our ancient rabbis place at the heart of the human experience, our spiritual posture needs to remain exactly the same: to stand humbly and responsibly before God, as we tend lovingly to the earth. 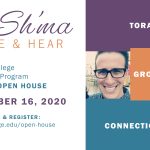 Rabbi Dan Berman is rabbi at Temple Reyim in Newton, MA. He was ordained in 2010 graduate by Hebrew College.