Holidays More Than One Thing: Purim and Reflections of the Image of God

Megillat Esther, which we read on the holiday of Purim, is a flamboyant, even farcical tale of good and evil. Its characters on the face of it are caricatures of human virtue and vice: Achashueras, the foolish king who sits on the throne but exercises no true leadership or authority; Haman, the sinister power behind the throne who cleverly executes his genocidal plan until he himself is executed upon the gallows intended for his greatest enemy; Mordechai, the righteous man of faith who faces seemingly insurmountable odds in this strange game of fate, and emerges vindicated and avenged; and Esther, the apparently naïve beauty queen, who saves her people in a single act of courage and defiance.

As children, we are captivated by and try on these personae, imagining ourselves as absolutely courageous or cowardly, virtuous or villainous, beautiful or ugly, good or evil. As adults, we hopefully learn to laugh at the absurdity of such absolutes — even as we recognize our childlike longing for them.

The tradition of dressing up on Purim allows us to play with both the allure and the absurdity of the absolutes we impose upon a world that is insistently and uncomfortably ambiguous. We “try on” the different characters in the Megillah or in our own culture, perhaps trying on different parts of ourselves.

As Rabbi Mishael Zion has written: “On Purim, we are using clothes against themselves, to deny their power to box us in … like the good carnival that it is, [Purim] makes us wonder if there is an ‘authentic self’ at all, or whether it is all just endless masks upon masks.”

This vertiginous question is embedded in the Hebrew word for clothing itself, “begged” — the same root that signifies deceit or betrayal. Clothing both conceals and reveals our true selves.

Our explicit masquerading on Purim brings into relief the implicit choices we make every day about the aspects of our identity we highlight, hide or hint at when we get dressed each morning. It invites us to be aware of the interaction of performance, posturing, exposure and self-expression in the costumes — the clothes — we wear every day, and points to a vital yet elusive truth of our humanity: we are each more than one thing.

Esther herself embodies this. From the moment she is introduced to us, her identity is hard to pin down. Is her name Esther or Hadassah? Is she Mordechai’s cousin or daughter? Persian or Jewish? Powerless or powerful?

In Tractate Megillah of the Babylonian Talmud, the rabbis pick up on these ambiguities. In one particularly striking midrashic twist, Esther’s beauty is linked to the very fluidity of her identity: “R. Elazar taught: To each and every person, Esther appeared as one of his own people, one of his own nation.” Commenting on this, the great commentator Rashi says, “Those who saw Esther would say out loud, ‘She is one of ours.’”

Read through this lens, Esther emerges as a complex, multidimensional character, and it is through this fullness and fluidity of her identity that her beauty — and her humanity — shine forth.

This lesson was brought home to me a few years ago when our son was seriously ill. I feared that his illness would be all people would notice when they looked at him. I am forever indebted to those individuals who could see that he was more than his illness — and helped him to see and remember that as well.

When we confuse part of a person’s identity or experience for the totality of who they are, we diminish the fullness of their humanity. This essential act of dehumanization is at the heart of so many forms of prejudice and most systems of oppression. It is also rooted in a kind of idolatry.

Moshe Halbertal and Avishai Margalit write in their book “Idolatry” that one classical form of idolatry is “the worship of an aspect (of the divine) — the separation of a part from its unity and the worship of that separated part.”

It is similarly idolatrous to take one aspect of a human being — created in the divine image — and mistake it for the whole. When we flatten ourselves or each other in this way, we diminish our humanity, and we diminish the One in whose image we are made.

The sin of idolatry is also at the heart of Torah reading Parshat Ki Tissa, with its story of the Golden Calf. In his book “Radical Judaism,” Rabbi Arthur Green shares a teaching from his teacher Rabbi Abraham Joshua Heschel. “Why is the Torah so concerned with idolatry? You might think … that it is because God has no image, and any image of God is therefore a distortion… ‘No,’ Heschel said, ‘it is precisely because God has an image that idols are forbidden. You are the image of God. But the only medium in which you can shape that image is that of your entire life. To take anything less than a full living, breathing human being and try to create God’s image out of it — that diminishes the divine and is considered idolatry.’”

God’s name is absent from the Purim story. But God’s image is very much present during our Purim celebrations, in the multiplicity of faces all around us, both hiding and longing to be seen. 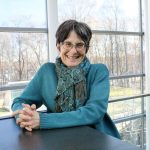