Pluralistic Perspectives Humility and Hope in an Uncertain World: A Purim Teaching 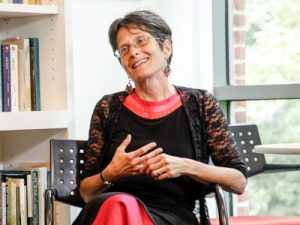 This morning’s Torah reading begins with a divine call. Vayikra el Moshe vayedaber Adonai elav. Something, someone calls out to Moses, and God speaks to him.

Vayikra. There are two things about the opening word of this verse and this sefer (book) that are noteworthy and that have given rise to much commentary. First, we are not initially told the subject of the verb “called”. Vayikra el Moshe. Not God called, but simply He called. Setting aside the distraction of the male pronoun for a moment, it is striking that the caller is initially anonymous in this verse. Moses hears something, senses something. But it takes a process for him to understand that he is being addressed by God.

The second thing that’s important to note about the word Vayikra is that in the Sefer Torah the aleph at the end of the word is written in miniature. There are a number of explanations for this scribal tradition, but many center around the deep humility of Moses as a leader. The small aleph of this call is contrasted with the enlarged aleph that appears in Chronicles in one of the references to Adam’s name. A contrast is set up between Adam’s hubris on the one hand – the hubris that led him to disobey God in the Garden of Eden – and Moshe’s humility – starting from the first time he hears the divine call at the bush, and says, “Mi anochi? Who am I that I should go to Pharoah?” And shortly after, “Lo ish devarim anochi. I’m not a man of words.” Can’t you send someone else?

It becomes clear that the opening verse of Vayikra, the opening verse of this book that is all about drawing near to God, begins with a reminder that the sacred work of living in relationship with God entails a capacity to live with mystery, with uncertainty, and with great humility about who and what we are hearing – and who and what we are serving — at any given moment.

Commenting on both aspects of the word Vayikra, the Hasidic master, the Me’or Eynayim, offers the following teaching:

“God is present in reduced form within every one of us. Even the most wicked person contains God’s presence. This is seen in the fact that every sinner has flashes of conscience. This is God calling us and saying “Return to Me!” But the person just doesn’t understand that this is the Blessed Holy One calling out to her. That is why “Vayikra” – He called – is written with a miniature aleph. God the cosmic aleph is present in miniature form within each Israelite, calling us to return. These are our pangs of conscience, but we do not perceive them as God’s own call to us. That is why “Vayikra” – He called – is written anonymously in our verse. But when the person understands that this is the voice of God and turns back toward the Creator, then Vayedaber adonai elav — “Hashem spoke to him from the Tent of Meeting.”

Midrash Tanhuma poignantly imagines Moses at this moment at the beginning of Vayikra. He has been through so much, after all. Reticent, reluctant, but rising again and again to the occasion.

The midrash reviews the long journey. Leaving Egypt. Crossing the sea. Entering the desert. The manna, the well of water, the quail. The mishkan, the holy tabernacle. Finally at this moment, with the mishkan completed, the midrash imagines Moses saying to God, Okay. From here on, what more could you possibly need me to do? And this is God’s answer: Hayecha. Really, Moshe. I have work for you to do now that is greater than everything you’ve done until now. You have to teach Israel about tumah and taharah, about purity and impurity. You have to carefully instruct them about how to bring their offerings to me – you have to teach them how to draw close to me.

The midrash closes where it began, saying, Mi she’rodef achar s’rara, s’rara borachat mimeinu. One who pursues position or prestige, it will ultimately flee from him.

The deepest measure of Moshe’s leadership is his humility, and his willingness – in spite of his doubts and hesitations – to rise to moments of responsibility when they come.

I’d like to connect all of this for a moment to the Book of Esther and the holiday of Purim that we will celebrate later this week.

I have come to believe that the most important verse in the entire megillah — the verse that represents the pivotal turning point in the Purim story – comes near the end of chapter four, when Mordechai sends a message to Esther, urging her to reveal her identity to the King and to plead on behalf of the Jewish people. Remarkably, Mordechai’s message to Esther hinges on two simple words that promise nothing and change everything.

Who knows if it wasn’t for just such a moment that you became queen?

Mi yodea? Mordechai says. Who knows? How we long for certainty, for the clear call from God, or for leaders who promise us that they know exactly what to do, or that everything will be okay. But that is not what Mordechai offers here, and it’s not what Esther embodies in her prophetic response. Much like the miniature aleph of Vayikra, Mi yodea invites a different kind of leadership, rooted not in bluster and bravado but in humility and hope.

I first became aware of the power of that Mi Yodea in the summer of 1993.

It was in Jerusalem. About 30 of us were crowded into a room upstairs at Bet Ticho, the beautiful restaurant and art gallery that once served as the home of Jerusalem artist Anna Ticho. In the 1920s and ’30s, her home became a gathering place for intellectual luminaries like Gershom Scholem and Martin Buber, whose photographs hung on the wall above us. Rabbi Jim Ponet was teaching — and drawing a contrast between the writers and thinkers who used to gather at Bet Ticho, and those who were influenced by the theology of Rav Kook, whose home was on the same street, just a few doors down — but worlds away.

Rav Kook’s world-view flowed from a deep faith in God’s promise of redemption; he saw the unfolding of human history in general — and 20th century Jewish history in particular —as an inexorable process leading toward the fulfillment of that promise. But the intellectual circle that gathered in the home of Anna Ticho did not inhabit Kook’s religious world of spiritual certainty and redemptive promise. Instead, they inhabited a spiritual universe that was much closer to the world of Megilat Esther — and, my pounding heart knew immediately at the time, a world much closer to my own. A world unredeemed and uncertain. A world in which even the name of God does not appear except through hints hidden between the lines of the text. A world in which the pivotal call to action comes in the form of a question — Mi yodea?

Mi yodea gave me a language for my religious commitment to humility, mystery, uncertainty; it helped me embrace ‘not-knowing’ as a spiritual path rather than a personal failure of faith.

That teaching came back to me two years later on a particularly painful Purim.

It was a year after the holiday had been forever transformed — and tainted — by Baruch Goldstein in 1994. Goldstein’s horrific act, of course, flowed from his own reading of the same Book of Esther that we were reading in the far reaches of the New Haven diaspora. But his was a reading that allowed him with breathtaking — indeed, life-taking — certainty to walk out of the mythic landscape of ancient Persia into the Cave of the Machpelah, where he opened fire on scores of innocent Muslims at prayer, killing 29 and wounding 125 others.

What did it mean to read the Book of Esther after that, we wondered? If Goldstein’s religious certainty led him to that act, what did my own commitment to religious humility and uncertainty require of me?

I learned then that, for Rabbi David Hartman, the answer lay in the central mitzvot of the Purim holiday. Aside from reading Megilat Esther, there are three other religious obligations associated with the holiday. They are mishloach manot (sending treats to friends and neighbors), matanot la’evyonim (giving gifts to the poor) and se’udat Purim (sharing a festive meal with community, with people we love).

What are we obligated to do in a world where confusion, cruelty and capriciousness often conspire to hide God’s presence? We’re asked to take care of each other. Feed each other. Be responsible for each other. Rejoice in each other’s companionship. What does Purim obligate us to do? In a chaotic and unredeemed world, it asks us to befriend one another.

Preparing for Purim on this Shabbat of Vayikra and this Shabbat of Zachor, the divine call of the miniature aleph and the call of mi yodea meet for me this year. Both are an invitation, a whisper, a question.

My friend and teacher, Rabbi Ebn Leader, brought us into Shabbat last night talking about the kol demama dakah, the thin voice of silence.

After all the noise – and there is so much noise in our lives — are we paying attention?

To the kol demama dakah, to the mi yodea, To the great Aleph that is calling out to the little aleph within us, saying Draw near. Befriend each other. Befriend Me.