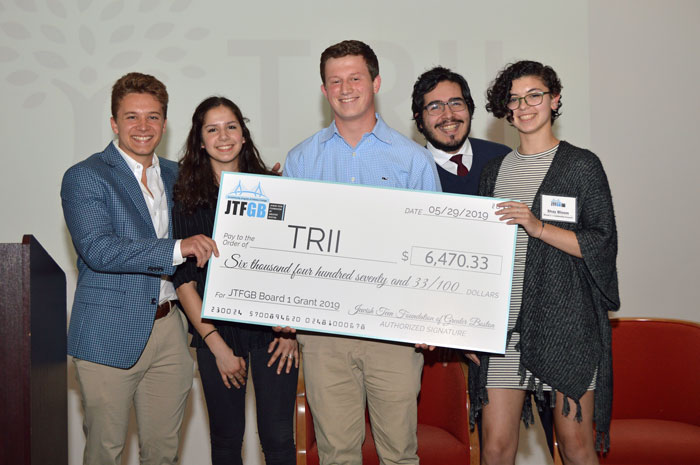 JTFGB, which launched in 2015, asks students to choose a philanthropic mission, raise money for that effort, and partner with non-profits – both Jewish and non-Jewish – to make a difference. Students learn how to build consensus, request and review grant proposals, and solicit donations. And throughout the process, teens are introduced to Jewish texts and ideas, including values of compassion, community, and tikkun olam (repairing the world), as well as to peers who have backgrounds and experiences that are different from their own.

“When I consider the impact of JTFGB, there are many things that come to mind. I think about the fundraising skills we are taught, the relationships we forge, and the impact we bring about,” said Isaiah Goldsmith, a senior from Brookline. “JTFGB allows us, with the generous support of our donors, our advisory council, and others, to be the motors of change, and lets us push our impact outward, however we choose to do so.”

Each year, the teens divide into three groups – or boards – and work together to pick an issue area, debating whether it will be local, national or global. Then they look for non-profits that connect to that issue area, do site visits to organizations throughout Boston, and debate the merits of various grant recipients. After a kick-off event in January, they begin sending tailored fundraising emails and making pitches on the phone. The teens raise hundreds of dollars each before choosing organizations to receive their grants and announcing their gifts.

This year, one board decided to give grants to organizations working to support and advocate for immigrants and refugees to “ensure that each person will have a welcoming and safe place to live with equal opportunity.” The second chose to give to organizations that support and advocate on behalf of victims of child abuse in order to “create a safer environment for children and raise awareness around the issue.” The third chose organizations that “strive to protect and repair the environment” because they felt “empowered by mutual responsibility to preserve the environment for future generations.”

“Choosing one single area of focus in such an unjust world was tough,” said Ilana Beloborodov, a junior from West Roxbury. “The board came up with many great contenders, but it really came down to what the most pressing issue was at the moment, and where we felt the most connection and ability to make change.”

The first board gave $6,470.44 each to JVS Boston’s Together We Rise refugee program, which helps refugees gain economic independence by connecting them with job opportunities in Eastern Massachusetts; to The Right to Immigration Institute (TRII) in Waltham, which addresses under-representation in immigration courts; and to The Young Center for Immigrant Children’s Rights in Chicago, which protects and advances the rights and best interests of immigrant children throughout the country.

The second board gave $6,834.30 each to the JCCA (formerly known as the Jewish Child Care Association) Gateways program, which helps young women and teens in New York City who have been commercially or sexually exploited; to the Healthy Families Emergency Fund of the MSPCC (the Massachusetts Society for the Prevention of Cruelty to Children), which helps young parents who cannot afford supplies for their children; and to ERASE Child Trafficking in Memphis, which works with law enforcement all across the United States to effectively counter child trafficking situations that they may encounter.

The third board gave $10,947.70 to Leket Israel, which partners with farms, catering companies, hotels, and corporate cafeterias throughout Israel to collect leftover fresh food and will use the funds to open a new branch of food service in Haifa, targeted at feeding disadvantaged children; and $6,600 to Better Future Project in Cambridge, which works with representatives from areas around the state to improve local policies surrounding climate change and will use the funds to plan a new Green New Deal for Massachusetts.

JTFGB launched in 2015 as a Foundation Board Incubator program with the Jewish Teen Funders Network (JTFN), which works with educators and professionals around the country to create, connect, and support Jewish teen philanthropy programs as forms of experiential education for Jewish teens. As an incubator, the program received three years of funding from Laura Lauder and The Maimonides Fund. The program is now doing its own fundraising to become a self-sustaining Hebrew College program beginning next year.

During its first three years, the program donated $146,000 to various organizations that help fight sexual assault, mental health, and substance abuse, amongst other issues.

“Giving back in one way or another has always been an important part of my Jewish identity, but I never fully felt like I was making an actual difference with that until I participated in JTFGB,” said Sophie Goodman, a junior from Newton. “This program empowered me to work with other Jewish teens from all over the community as we incorporated our Jewish values into the world of philanthropy. As a group, we were able to raise enough money that we could actually see that change that we were actively making.”

“Before JTFGB, I found myself feeling badly about these types of societal trends, but I did not have a sense of how to work towards effective change,” added Matt Gluck, a senior from Newton who has participated in the program for all four years of high school. “I have learned, through this program, how to address issues by providing real assistance instead of simply hoping that these problems will resolve.”

The JTFGB grant ceremony was part of a week-long community celebration at Hebrew College, which included Hebrew College 94th Commencement, rabbinical and cantorial ordinations, and Hebrew College Live! Stories in Honor of Our Teachers, a storytelling event featuring five alumni storytellers and musicians and emceed by Mark Oppenheimer, host of Tablet magazine’s popular podcast, “Unorthodox.” Leah Goldstein, the director of JTFGB, was honored at the event with Hebrew College’s Esther Award, given annually to a woman who embodies the College’s commitment to Jewish learning and leadership for a pluralistic world and whose achievements as a communal and philanthropic leader have enriched the Hebrew College community through her passion for Jewish learning and living.