Seventy Faces of Torah From Fast to Festivity: A Zoom Mitzvah in the Narrow Straits

About six weeks ago, finally facing the reality that our son Zalmen’s bar mitzvah — scheduled for Labor Day weekend — would not be able to take place as we had imagined, we decided to move it up to his Hebrew birthday. He was born on the 17th of Tammuz, a fast day in the Jewish calendar that commemorates lamentable events in Jewish history, including the smashing of the first set of tablets of the ten commandments, the ceasing of the daily offerings during the siege by the Babylonians leading up to the destruction of the first temple, and the breaching of the walls of Jerusalem by the Romans, leading up to the destruction of the second temple. You may understandably wonder why we would choose to celebrate our son’s transition into adulthood on this solemn day. The decision, once we made it, though, felt increasingly like the right one, and not only because of factors like the ability to create a week-long Zoom festivity stretching from his secular birthday to his Jewish one, the exciting (for a clergy kid) liturgical and cantillation challenges of the fast day, and the fact that we could feel a little less badly about not being able to feed our guests, who are Zooming in from far and wide, due to the fast day, as well as our quarantining. 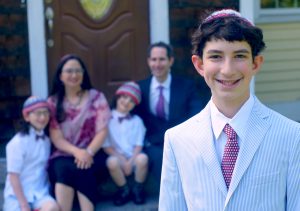 I was thinking about our son’s fast-day bar mitzvah in relation to a teaching by the Bnei Yissaschar, Rabbi Tzvi Elimelech Spira of Dinov (c. 1783-1841), in his teachings on the time bein hametzarim, in the narrow straits, the three weeks between the 17th of Tammuz and the 9th of Av, which commemorate the destruction of the two Temples. He points out that the number 17, for the 17th of Tammuz, is equivalent in gematria to the word טוב (Tov) or “good (9+6+2=17).”  What’s good about the 17th of Tammuz? The Talmud (Baba Kama 54b-55a) asks why the word “good” appears only in the second rendition of the ten commandments, but not the first. Rav Ashi answers that God knew that the first set was destined to be shattered, and if the word “good” had been on the first set of tablets, then, God forbid, all good would have vanished from Israel, and presumably from the world. God didn’t want the world to suffer that breakage, so in a way, the breaking of the first tablets and not the second was really all for the best. One could extrapolate that all the disasters that have occurred on the 17th of Tammuz, from ancient times through another day in the life of pandemic, in a country still torn by inequality, are for the good, because the good hasn’t shattered completely. Rabbi Isaac Luria said that when Aaron, in vainly trying to delay the making of the golden calf, said “it will be a festival of God tomorrow (Exodus 32:5),” he was really prophesying that the next day, the 17th of Tammuz, would be a “yom tov (Tov=17),” a day of goodness, partly then, and partly in times to come.

The Bnei Yissaschar goes on to ask why the two parshiyot before Pinchas, Chukat and Balak, which can be combined, are almost always read on separate weeks, while the two parshiyot after Pinchas, Mattot and Mas’ei, are almost always read together as a double-parsha. He answers that this is done in order that Pinchas, Mattot, and Mas’ei, which describe the distribution of the land of Israel, be read during the three weeks “in the narrow straits,” in order to give us hope during a period when we might be feeling depressed. He says, furthermore, that Pinchas is read during this time because it describes the festivals, the sacred times. We may find comfort in recounting the holidays we already know and love, as well as in the words of the prophet Zecharia (8:19), who says that in future times, the fast days will be transformed into additional days of festivity, joy, and goodness. 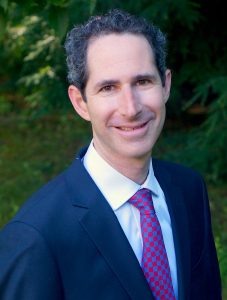 The question I’ve been wrestling with as a clergy person during COVID times is how much to simply be with people during their suffering, a main lesson I carried away from Clinical Pastoral Education, and how much we should try to lift each other’s spirits through conversation, song, and prayer. Bringing this question into lifecycle events, I’ve been wondering how we can mark milestones in a way that feels authentic, and that balances recognition and celebration with the loss we feel due to our social distancing. What events should we postpone until we can celebrate them more normally, and what should we mark as best we can now?

Although it still feels strange to celebrate our son’s Bar Mitzvah on a fast day, something about these pandemic times fueled our urgency to do so on his birthday, at the first available opportunity. Everything is not normal. Many of us are suffering in a variety of ways, but our son is turning thirteen anyway, and it seemed all the more necessary to recognize him as soon as we could for the kind, funny, and thoughtful young man he is becoming. We hope that this pixelated celebration, for our family and friends and community, will have some of the same effect that the Bnei Yissaschar ascribes to reading Pinchas during the three weeks: that it can bring some goodness and hope into the world, and that it may, in some small way, turn a fast day into a day of festivity.

Ken Richmond has been the Cantor of Temple Israel of Natick since 2006, and has also served since then as adjunct faculty in Hebrew College’s cantorial program. He is studying at Hebrew College’s Rabbinical School, with an expected ordination date of spring 2021.  He is married to Rabbi Shira Shazeer (HCRS ‘10), who joins him in kvelling this week.