Being a part of the Jewish community is not always a piece of cake. For many who grow up in metropolitan areas, such as Boston, New York, or Chicago, it can feel like everyone you know is Jewish or that Jews are the majority population. But once a person leaves the lovely metropolis bubble, it becomes starkly obvious how much of a minority Jews are.

I grew up in a small town in Arkansas where the Jewish population was about 50 families; enough to sustain two small synagogues and one Chabad. The majority of my Jewish education came from home practice led by my two amazing parents and from summers at Camp Ramah Darom. Out of the 600 students I graduated from high school with, three of them were Jewish. Often, I found myself justifying my culture and religion to those who had never met a Jewish person before. While these interactions were rooted in curiosity and genuineness, it was an exhausting job.

When applying for college, I knew I wanted to be in an area with a thriving Jewish population, and Boston became my home. During college, I found a beautiful Jewish community with which I could have stimulating conversations and make connections unlike any other. This community meant so much to me, especially since it was not something I had regularly while growing up. After graduation, I knew I wanted to maintain that connection to the Jewish community, especially the young Jewish community. This community was a big reason for me to stay in Boston after college. 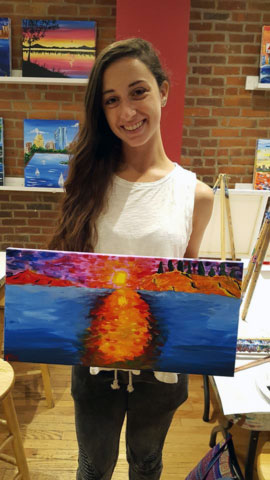 I happened upon Hebrew College’s Eser program [part of Hebrew College’s Open Circles 20s & 30s Community Learning program] because a colleague of mine recommended it. At first, I wasn’t sure if I wanted to take a class every week. I had just finished school so spending one evening a week in a discussion setting wasn’t at the top of my priority list. But she convinced me, and I am forever grateful for that. In my Eser cohort, I found Jewish connections that surprised and delighted me. For so long, my exposure to Jewish perspectives was very limited. Through Eser, I was able to hear unique perspectives on life and Judaism and I was able to share mine. I looked forward to class every week, ready to engage in stimulating conversation as well as lighthearted banter. By the end of the session, I found myself feeling more connected to everyone in my group than I anticipated. I had found a space in which my Jewish identity could grow on a regular basis.

If you have the chance, I encourage you to take an Eser class. It will expose you to perspectives you’ve never seen before and it will make you rethink aspects of Judaism you thought to be obvious. Eser is about building community and it will do just that.

Deborah Greene, most recently from Fayetteville, Arkansas, graduated from Tufts University in 2018. She currently works for Combined Jewish Philanthropies as well as a professional dancer in the Boston area. In her free time, you can find her taking a dance class, trying out a new recipe, singing Broadway show tunes, or showing off photos of her pets.