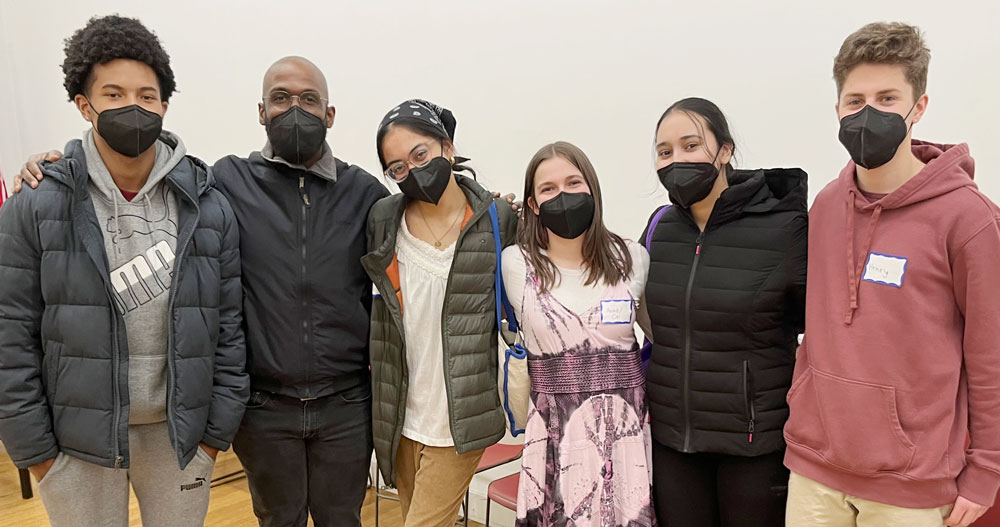 On the third Monday of January each year, communities across the United States and the world honor the life and legacy of The Rev. Dr. Martin Luther King, Jr. and ally freedom fighters by engaging in service projects, dialogue, and prayer. This year, the Dignity Project of Hebrew College, a fellowship for high school students coordinated by the Miller Center for Interreligious Learning & Leadership, hosted a Martin Luther King, Jr. Day of Service on Sunday, January 16, 2022. The event brought together an interfaith and interracial group of middle to high school-age youth, who gathered to think deeply about the values and spirit of the Civil Rights Movement before organizing to package food bags for Centre Street Food Pantry and co-facilitating workshops on the power of music, photography, and handling difficult conversations with poise. Dignity Project mentor Rev. Andrew Kimble delivered a compelling and inspiring message to help set the tone for the day. Here’s the transcript of the words he shared with our community.

Have you ever seen a duck swim in a pond?

The top half of its body seems relaxed and focused, as if it sails upon the water by depending on the wind. But we all know that ducks aren’t propelled by the wind. Beneath the water’s surface, their legs and webbed feet churn and churn and churn.

Today, as we celebrate the life and legacy of The Rev. Dr. Martin Luther King, Jr., I want to ask you brilliant, humorous, humble, sensitive, creative young people: are your values, beliefs, and truths moving you in a direction that makes you proud?

As the duck treads waters, the bottom half and top half must be in sync. So it is for ourselves, right? Our inner world has much to do with the outer.

In this country and all over the world we recognize The Rev. Dr. Martin Luther King, Jr. and those who struggled for freedom and justice during the Civil Rights Movement for their capacity to stand tall in the face of hate; for their ability to demonstrate the power of nonviolence by resisting the temptation to take an eye for an eye; and for their deep sense of hope, courage, and consistency amid a complacent local, state, and federal government.

How did Dr. King and his contemporaries sustain themselves in the midst of it all? These weren’t just adults, you see, high schoolers, college students, and youth actively participated in sit-ins and marches to combat racism, segregation, and Jim Crow laws . . . . how did they sustain themselves?

1. They possessed an unconquerable spirit, but that spirit was fashioned by their values, beliefs, and truths . . . .

For example, on April 4, 1967, Dr. King spoke out against the War in Vietnam, which many thought was beyond the purview of a black minister fighting for civil rights, but Dr. King thought it paradoxical for the country to be so concerned about matters abroad when we had serious issues to face here at home.He had previously spoken out against the war, but April 4, 1967 was the first time he critiqued President Lyndon B. Johnson and his administration’s war policy, which drew the ire of media, politicians, and some of his own colleagues in the civil rights movement. It was his conscience, my friends, that moved him to speak out . . . . it was a time to break silence. He opened his speech at Riverside Church in New York City with these words:

I come to this magnificent house of worship tonight because my conscience leaves me no other choice. I join with you in this meeting because I am in deepest agreement with the aims and work of the organization which has brought us together: Clergy and Laymen Concerned about Vietnam. The recent statement of your executive committee are sentiments of my own heart and I found myself in full accord when I read its opening lines: “A time comes when silence is betrayal.” That time has come for us in relation to Vietnam.

2. They understood their role in a long legacy of freedom fighters, meaning, if they could get a little closer to the goal of creating a more perfect, a more just, a more equitable union not only for themselves but for posterity, then they have done their job . . . .

In his final speech in Memphis, Tennessee on April 3, 1968, where the city’s sanitation workers were striking for better treatment in the workplace because, unfortunately, they experienced neglect and two men had recently died from being crushed by a malfunctioning truck. Dr. King said:

We’ve got some difficult days ahead, but it really doesn’t matter with me now, because I’ve been to the mountaintop . . . . I’ve seen the Promised Land. I may not get there with you. But I want you to know tonight, that we, as a people, will get to the Promised Land.

Less than 24 hours later, Dr. King was assassinated by James Earl Ray. He and many others who gave their life surely understood their role in extending the long legacy of freedom fighters.

In college, I had a professor named Dr. Vincent Harding who was a close friend and colleague of Dr. King. Two things he’d said repeatedly that I’ll never forget.

The first is, “We are the ones we’ve been waiting for.” The second is, “We are citizens of a country that does not yet exist.”

“We are the ones we’ve been waiting for” means the responsibility is ours to bring whatever dreams we have to fruition. Superhero movies abound—I’m sure some of you’ve seen the latest Spiderman—but superheroes don’t exist. Only inconvenient heroes exist, heroes who disturb the status quo for the sake of justice.

“We are citizens of a country that does not yet exist” reminds us that the American Constitution and all of our founding documents are purely aspirational. Our reality doesn’t yet reflect the notion that all people are created equal, and so this country we speak of, this United States of America, is hopefully, hopefully, emerging. But it would be a terrible mistake to think our work is finished.

And that’s where you little ducklings enter the scene. Dr. King and those in the movement for civil rights had core values that determined their direction. Whether you are part of a faith tradition or not, whether you care about certain issues or not, whether you believe it or not, there will be days when you’ll need to draw upon something deep within to preserve, and perhaps, increase the dignity of our human project. Some of you already know what I’m talking about. To the rest of you, be ready!

Peace be with you. 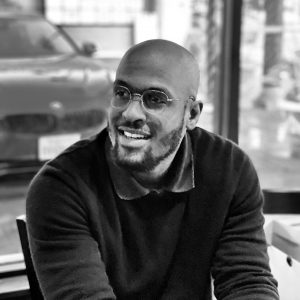 Dignity Project Mentor, Andrew Kimble, revels in conversation about philosophical and theological topics, ranging from the metaphysical to the ethical. He currently serves as associate minister of church and culture at the Historic Charles St. AME Church and works at the Boston University School of Theology (BUSTH) as assistant director of alumni and donor relations.

Andrew earned a BA in philosophy at Morehouse College and an MDiv from BUSTH. In his free time, he enjoys spending time with friends and family, meeting new people, exercising, listening to jazz, and visiting the used book section in local bookstores. Originally from Los Angeles, he tries to bring a little “sunshine” wherever duty calls.

News Highlights The Book of Psalms