Hanukkah Chanukah Means Accepting All that is Offered

“I dwell in possibility,” Emily Dickinson once wrote. On Chanukah, the festival of dedication, we take the possibilities of life and invest ourselves within them, making them our own.

On Rosh Hashanah, we are told, our decree for the year is signed. On Yom Kippur it is sealed. On Hoashanah Rabbah, it is handed over for delivery. But only on Chanukah is the crucial last step taken: on Chanukah we receive and accept the New Year, taking possession of it, absorbing it and assimilating it as a new part of ourselves.

We live in a culture which makes commitment very difficult. As consumers, we are presented with a cornucopia of choices to satisfy every conceivable human want. Corporate advertising budgets are huge because product loyalty is negligible: one can change brands as easily as one does television channels.

Life itself becomes a never-ending sequence of switches and transitions. We change jobs, locations, partners, loyalties, political parties, religions, self images, even identities. The undying love of yesterday becomes today’s hatred; the passionate interest becomes the passing fad. The script of our lives is written on a word-processor so that it is always possible to insert, move, return, delete, and even go-to-end.

At some point, however, we realize that this infinite plasticity leaves us without a core, a center, a past or a future. That is the moment of Chanukah, of dedication.

Rabbi Bunum looked at him, eyes filled with intensity and compassion, and said, “There comes a time in life when we make a move that cannot be taken back.” The person felt a burning in his soul, and vowed to begin the process of return.

Perhaps the greatest of all mysteries is that of personal identity. Why was I born at this time, in this place, to these parents, within this body, bearing these native traits and characteristics, displaying this personality? There is no answer to these questions; they are part of what has been called “the scandal of particularity.”

There are two responses to this mystery. One may attempt to escape it by imagining (as did some existentialists) that one can make one’s own life from the beginning, that one can, as it were, give birth to one’s self, fashioning an identity in whatever image one chooses. Or one can accept the particularity of one’s life as a gift, not as irrevocable fate, but as the structural core, the generative matrix, the ground of one’s being, from which all else emerges and flowers. One simply accepts life as it is, in sincere appreciation.

That is surely what Rabbi Moshe of Kobrin meant when he said that in this day and age, the greatest devotion, greater than learning and praying, consists in accepting the world exactly as it happens to be. This is the same Rabbi Moshe of Kobrin of whom it was said that the most important thing in his life was whatever he happened to be doing at the moment. This quality of presence, of receptivity and acceptance, is expressed by certain religious thinkers as the “suchness” of life. For us it is the quality of Chanukah.

This quality reaches its peak on the last day of the festival, know traditionally asZot Chanukah: “This is Chanukah.” The name derives from the scriptural reading for the day. Each day of Chanukah, we read a section of the Book of Numbers which tells of the offerings brought individually by the Princes of the Twelve Tribes of Israel, to dedicate the altar of the Tabernacle. On the eighth and last day, the Torah says, Zot Chanukat ha-mizbe’akh, “This is the dedication of the alter, on the day of its being anointed …”

The quality of Zot – “This” – refers to the receiving and embracing, the accepting of all that has been offered, all that has been bestowed. The particularity of each individual’s offering was now focused and absorbed, cherished as an aspect of a meaningful whole. The altar was now dedicated by use, and could serve as a vehicle of communication, a channel of grace between human beings and the divine.

That channel becomes most available to us on Chanukah, especially on the last day known as Zot Chanukah. The world stands revealed in its infinite particularity, in its “mystery of the possible” (to use an early kabbalistic phrase), and invites us to commit ourselves to it, to invest ourselves within it.

Only with that commitment, only by that investiture, can we hope to find our true selves. On that day we find new meaning in the words of the psalmist, recited during Hallel, “This is the Lord’s doing; it is wonderful in our eyes. This is the day which the Lord has made; let us take delight and rejoice in it.” 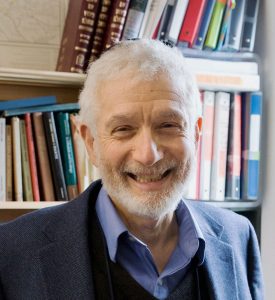 Dr. Nehemia Polen is Professor of Jewish Thought at Hebrew College in Newton, MA. He is the author of The Holy Fire: The Teachings of Rabbi Kalonymus Shapira, the Rebbe of the Warsaw Ghetto, and is a contributing commentator to My People’s Prayer Book, a multi-volume siddur incorporating diverse perspectives on the liturgy. He received his Ph.D. from Boston University, where he studied with and served as teaching fellow for Nobel laureate Elie Wiesel, and rabbinic ordination from Ner Israel Rabbinical College.