In advertising his classes, Feldenkrais® for Eye Strain and Other Challenges of Teleconferencing and Sounder Sleep® for Insomnia, Stress, and Anxiety, Shalem reassures students, “I know, a class on Zoom about the problems with Zoom, right? Fear not, most of the actual class will be away from the screen.”

“I want to offer these classes as a service to our community because I think they are very needed right now,” he says. “We’ve been cooped up at home, had our schedules disrupted, are forced to do the bulk of our interactions through the computer screen, and we’re all worried about the state of our communities and our world.” 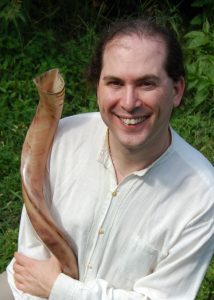 Shalem, who is entering his second year of rabbinical school, said he first had the idea for these courses when Hebrew College went online in March; he realized how much harder it was to teleconference for hours rather than sit in class or just work at his computer. There was “just something about interacting with people through the flat screen that I found exhausting,” he said.

Before coming to Hebrew College, he spent nearly two decades as a teacher of the Feldenkrais Method of Somatic Education, combining deep mind-body awareness with his passion for Jewish music and prayer. He decided to become a rabbi to reach and serve more people. “Feldenkrais work, as incredible and transformative as it is, is such an obscure niche,” he said. “And the people who come to me for it usually want me to help them with their back pain or their sciatica and feel blindsided if I start talking about personal transformation. Sure, your average shul-goer doesn’t think they’re looking for transformation either, but they kind of expect their rabbi to talk about it!”

He had stepped back from marketing his Feldenkrais practice when he started rabbinical school but decided to offer classes again when someone reached out for help with vertigo, which Shalem identified as connected to the individual’s eye strain, stress, and lack of sleep. “It seems to me that this is less about marketing, and more about making a difference in people’s lives, helping them live better in their skin,” he said. “This was really no different than why I decided to become a rabbi in the first place.”

As the High Holidays approach, he also plans to teach a class on Embodied Teshuvah, drawing on the principles of the Feldenkrais Method and its focus on awareness through movement to develop in participants a deep sense of mind-body connection, and to put that in context through close readings of Jewish text drawn from biblical, liturgical, Rabbinic, and Hasidic sources. He believes that cultivating a deep awareness of ourselves and our actions is even more critical during Elul.

“On a certain level Yom Kippur and the Feldenkrais method seek to do the same thing: to provide a space for change in our habitual ways of living,” he said. “The Feldenkrais Method invites us to notice ourselves. To notice our actions—yes, our habits—on the most fundamental and subtle level: in the way we make every single movement. Much of the point of the High Holidays is to make a change in ourselves, as we seek to leave the old year behind. We call this change teshuvah, which, loosely translated, means ‘return’—traditionally referring to return to ethical behavior and to God, but also to living in spiritual harmony with God and the world. As we do that, we also become aware of our assumptions about ourselves and about these habits, and realize—finally—that we are not our habits . . . By becoming aware of ourselves in action, we open ourselves to choice. We open ourselves to change. We open ourselves to life.”