Community Blog A Lifetime of Learning 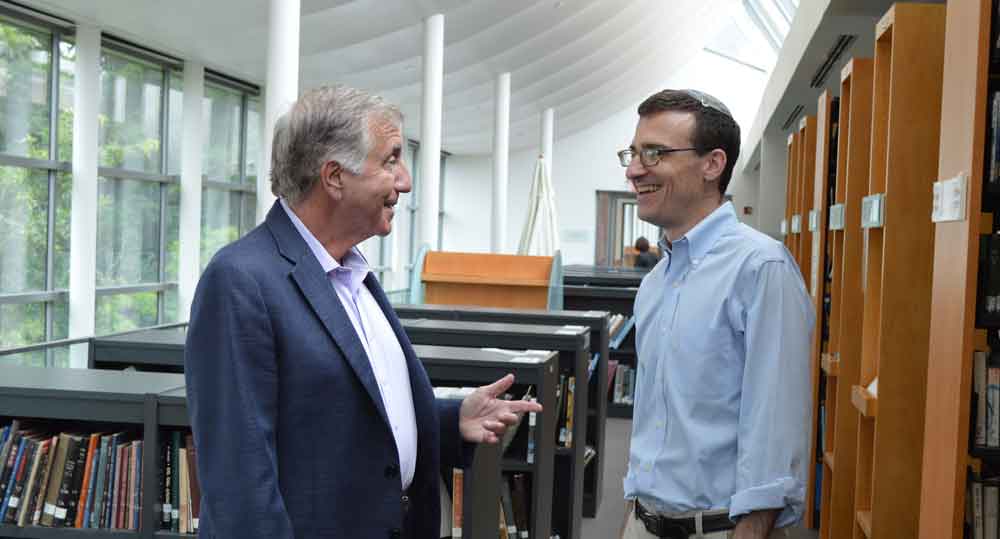 Carl Chudnofsky, MAJS`13, Me’ah`06, a business executive, enrolled in a Masters of Arts in Jewish Studies at Hebrew College and continued studying alongside rabbinical students because he wanted to enrich his Jewish knowledge. Shoshanah Zaritt, MJEd`17, a former day school administrator, enrolled in Mekorot after completing her Masters in Jewish Liberal Studies so she could study with future rabbis in the beit midrash. And Hebrew College Me’ah program alumnus Dr. Nathaniel Katz, a neurologist and biotech CEO, started taking classes with Mekorot students to create a stronger Jewish practice for himself.

Chudnofsky, Zaritt, and Katz are three of the Hebrew College’s continuing education students who take rabbinical and cantorial school classes, one of the many opportunities for community learning at Hebrew College. Dr, Katz has taken classes alongside rabbinical students for nearly 10 years. Chudnofsky, who also graduated from Me’ah, and Zaritt, who studied Hebrew at Hebrew College as an undergraduate, began their studies in the MAJS program more than a decade ago and have continued taking classes ever since.

“Even though I’m not interested in formally being a rabbi, the concept of learning what a rabbi would learn and acquiring the competency to live Jewishly is what appealed to me,” Dr. Katz said. “I did the Me’ah program many years ago. That was a really good overview, but I always felt like I wanted to learn more. So I started taking classes in the Mekorot program. I wanted to be part of a living and learning community — to be able to explore my own Jewishness, to pray with a group, and to enrich my Jewish life.”

Dr. Katz completed the one-year Mekorot program in three years. And he has continued taking one or two rabbinical school courses each semester, fitting it in within his busy work schedule.

Zaritt also takes classes in the Mekorot program. She started studying alongside the current Shana Bet class after completing her masters in 2017. Zaritt, who grew up in the Reform movement in Kansas City, Missouri and studied religion and philosophy at Boston University, has always had a passion for Jewish learning and considered becoming a rabbi. She met her husband when taking Ulpan at Hebrew College in Brookline and her husband and two of children graduated from Prozdor. When she was working as director of student life at Gann Academy in 2007, she decided she was ready to return to Hebrew College.

“I’m the biggest nerd known to man. I truly love studying. I really wanted to be in real classes that had real homework and real grades, because I knew I would do the work,” she said. “As we age we have to make decisions about what’s the next chapter in our lives. I like learning, I like studying with others. I think that helps define who I am.”

Chudnofsky also enrolled in the MAJS while working full-time. After taking Me’ah at his MetroWest synagogue, he realized he wasn’t done learning. He spent six years in the MAJS program, and wrote a master’s thesis on “Jewish Identity and the Real Estate Entrepreneur.” He also studied Hebrew with a private tutor twice a week at 7:30 a.m. Since graduation, he has continued to take Hebrew College classes.

“I’m a business guy. In the back of my mind I was always thinking, ‘Take classes, take classes,’ but I was too busy. I made time for Hebrew College’s Me’ah program and loved it. Then I said, ‘I need more.’ That’s what motivated me to get a Masters in Jewish Studies at Hebrew College,“ he said. “Since graduating, I’ve continued to take Hebrew College graduate classes. My studies have enhanced my passion for Jewish history and philosophy, and the teachers keep me coming back for more. They are the crown jewels of the Jewish Boston community.”

Chudnofsky said the Hebrew College faculty are the reason he keeps returning for more classes. He also loves being part of the community and “hanging out at Hebrew College” because of the feeling of spirituality within the institution. He has also been a member of the Board of Trustees for six years.

Zaritt says she has bonded deeply with her havruta partners, as well as with other students in her class. She comes to the Hebrew College library to study with classmates in the summer, even when her classes aren’t in session.

Katz said he was surprised by how much the Hebrew College community has meant to him. The people and courses at Hebrew College have become such an important part of his life that he’s now looking for a house closer to campus.

“I was going in there head down to soak up the knowledge and use it to inform my decisions. What surprised me was how much becoming part of that community became even more important to me than what I initially thought my goals were,” Dr. Katz said. “Even as a partial member of the community, I have felt welcome here. When I recently started looking for a house I wanted to make sure it was within striking distance of Hebrew College.”

And while all three have considered rabbinical school, they have no plans to enroll at the moment.

“I just finished studying my second year of Talmud, but I’m not in the rabbinical school. I don’t need a degree. That’s the path I didn’t take,” Zaritt said. “But it’s such an inspiration to study alongside the people who choose to study here. Studying in the beit midrash is a beautiful feeling.”

“I frequently get asked by the teachers, ‘Have you enrolled yet? When are you enrolling,’” Dr. Katz added. “My official response is that I currently have no intention of enrolling, but who knows? Things change. To quote Mark Twain, ‘prediction is very difficult, especially about the future.’”

To learn more about taking rabbinical courses and/or applying for the MAJS degree, contact lrosenberg@hebrewcollege.edu.