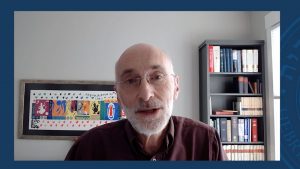 In Gen. 17:16, which is in this week’s parashah, לֵךְ־לְךָ, God announces to Abraham that Sarah will bear him a son. This pronouncement strains the credulity of even such a paragon of faith as Abraham. In response, Abram falls on his face and with a laugh says to himself, “Does a 100-year-old father a son? And as for Sarah, does a 90-year-old give birth?”

There is a grammatical oddity in Abraham’s question. The common device for introducing a yes-or-no question in Biblical Hebrew is the particle הֲ־, “the interrogativeheh” (written הַ־ in some circumstances, including when the first letter that follows is pointed with a sheva). (In later Hebrew it appears mostly in combination with the word אִם, in the form of the semantically equivalent interrogative, הַאִם.)

So we might have expected the first part of Abraham’s question to read, הַלְבֶן מֵאָה־שָׁנָה יִוָּלֵד. But what he asks is actually written in a slightly different way. The first word of his question is not הַלְבֶן, but הַלְּבֶן — which, you will notice, differs subtly but significantly, because there is a dot (in Hebrew, a dagesh) in the letter lamed. Now, words with a prefixed heh, pointed as it is in הַלְּבֶן is, are extremely common in Hebrew; this heh prefix is, of course, Hebrew’s definite article — the equivalent of adding the word “the” before a noun in English.

But in this verse we are clearly not dealing with a definite article before a noun, but rather with an indication that what follows is a question. So why this pointing?

In fact, this is one of several instances where a heh pointed like the definite article appears in the Tanakh where we would expect an interrogative heh. (Other examples are in Gen. 19:9, Lev. 10:19, and Deut. 20:19.) Some scholars (most recently, Jacob Milgrom in his commentary on Leviticus) have suggested that these cases all have one thing in common. They can be viewed as not genuine questions, in which the speaker is uncertain whether something is true or not; they are, rather rhetorical questions. Abraham knows perfectly well that 100-year-olds do not father children — that’s precisely why he laughs at God’s announcement. If the Tanakh used modern English punctuation, Abraham’s question would have ended with “?!”  Similarly, when Deut. 20:19 asks, “Are trees of the field men?” the answer is obvious; the question is rhetorical.

There is a wrinkle, however. In the second part of his question, regarding Sarah’s childbearing capacity — הֲבַת־תִּשְׁעִים שָׁנָה תֵּלֵד — Abraham reverts to the commonplace interrogative heh. Is his conviction in common knowledge weakening? Is his conviction in God’s capacity returning? Does he consider the possibility of Sarah’s bearing a child at her age less outlandish than his fathering one? Could it be that those who were responsible for pointing the text were uncomfortable substituting the definite article before a noun beginning with a letter bet, because its pronunciation would thereby be significantly changed? Did a scribe at some point (perhaps for the same reason) replace the unconventional pointing of הַבַּת with the common pointing of the interrogative heh? Or was someone just inconsistent in pointing this verse?

Good questions — and not just rhetorical ones!

Harvey Bock is Hebrew Language Coordinator and Adjunct Lecturer in the Rabbinical Program at Hebrew College in Newton Centre, MA.