if community was a gold chain
it would be 24 carats laid gently upon elegant collar bones
grazing the skin as stallions graze fields
the treasure of the orphan, once abandoned now redeemed by a people not their own
community says “my mother is your mother, my father is your own”
“nurse at her breast, be cradled in his arms”
“for my cousins are your kin, my brothers your shield”

si la comunidad era armadura
sera la armadura de Dios, armadura de protection celestial
soldados son el pueblo
equipados para guerra
if one falls, don’t the 99 rush to his side?
incline his head to the heart beat, a baby to the mother lands chest
does not community nurture the ill of heart back to good health?

if community could be evidence to the existence of God
would it not be the clearest?
for didnt His presence pass through Abrahams offering, the seal of a covenant for generations
does His spirit not pass through people like He passed through those carcasses
does He not pass over dead things and breath them to living
is not community an oversized family taking in the loveless?
is not love the cure to our demons?

as we are apart
let us not doubt the power of the people
for three is better than one
and thousands are a watch tower, a wall of heavenly stones
through screens we pray, we laugh, we weep
though we do not touch, is community not ten times stronger in adversity than they are in peace? 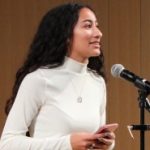 Born and raised in Boston, MA, for most of her life, Alondra Bobadilla found and nurtured her love for writing since she learned her first letters. Besides writing, she has participated in multiple performance art forms since she was a little girl, finding ways to express herself beyond poetry alone. She is a student at Fenway High School and was named Boston’s first-ever Youth Poet Laureate in January 2020.