A few years back, I was looking up a friend from college who had become a rabbi and whose name had come up in a conversation. His bio said that he had been studying this thing called “Mussar” daily for several years.

I had done a lot of Jewish learning, but had never heard of Mussar. I looked it up, but left it at that.

A week or two later, my wife and I were in the Berkshires and entered a store with considerable Judaica. There, right in front of the checkout counter, were several stacks of Every Day, Holy Day, one of the key works by Alan Morinis, the founder of the Mussar Institute and one of the leaders of the Mussar resurgence.

Coincidence? Message? Who knows. What I do know is that I bought the book and quickly became intrigued. I read it nightly — sometimes with my wife — and bought other books by Morinis. Then I asked Terri Swartz Russell, Temple Emanuel’s director of Adult and Family Education, to see if she could find a course for our shul.

Terri brought in Rabbi David Jaffe, one of the foremost Mussar teachers in North America and, with eight other learners, I began learning Mussar through Hebrew College Open Circle Jewish Learning. We have now met every other week for the past two years. In between sessions, we meet for one-on-one sessions with a chevruta, or study partner, from the class.

Rabbi Eric Gurvis, who succeeded Rabbi Jaffe as our teacher last year, and with whom we hope to study for years to come, described Mussar as “the Jewish journey to character.” I have found it to be exactly that and much more. It has been — without exception — the most valuable and important program of study I have undertaken. It has provided me guidance and perspective on how to be a Jew with character — or, as our people put it, to have menschlekheit.

We study different Middot — soul traits — such as gratitude, humility, patience, equanimity, joy, and enthusiasm, attempting to maintain balance within each trait and to harness the interdependence among these traits. We read passages going back to the 1600s, as well as those written in the present day. And more than just learning, Mussar is a practice — and it takes work. Daily or regular journaling is extremely beneficial—there’s something meaningful about committing your thoughts to paper. You get out of it what you put into it.

Now that I have made Mussar a daily practice, it is constantly percolating in the back of my mind and providing signposts for my day-to-day life. Mussar is there to remind me to act a certain way and to help me catch myself when I begin to stray from the person I want to be.

I wonder if I would have discovered Mussar if I had not been so curious about my old college friend or had not gone into that store in the Berkshires. My curiosity helped me find this meaningful movement and it has changed me.

I encourage you to be curious, as I was — to walk through the door. Doing so will help you on your own unique journey through life. 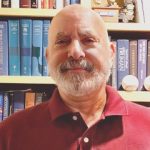 With his family, Rick has been a member of Temple Emanuel in Newton Centre for more than 35 years. He is the co-chair of the Ushers Committee and a Head Usher, former shul Treasurer, former member of the Board of Directors for more than 20 years, and member of the Bereavement Committee, among other involvement. He is at shul each Shabbos with his wife, Sandy (who is much more learned than he is) and typically on days each week in between. He is retired after working for more than 20 years at Fidelity Investments and is studying, learning, volunteering, and generally having the time of his life.