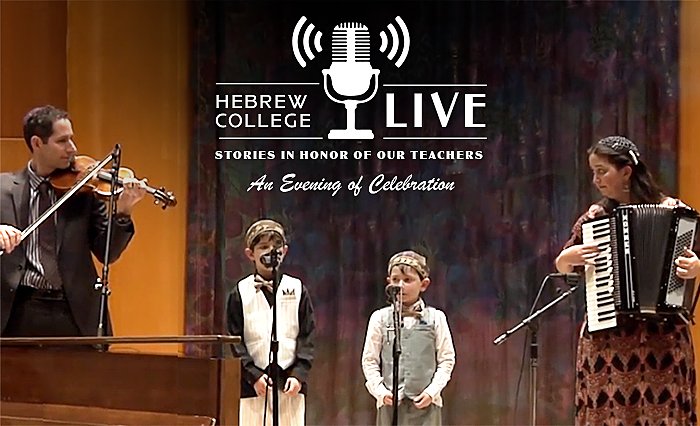 Cantor Ken Richmond and Rabbi Shira Shazeer Rab’10 are committing to sharing their passions for Jewish music, texts, culture, and traditions— as well as yiddishkayt — with the next generation.

They do this every day through their roles at Temple Israel of Natick — where Richmond is the cantor — and MetroWest Jewish Day School (MWJDS) — where Shazeer is the Rabbi. And as parents to three boys — Zalmen, a sixth grader at MWJDS, Velvel, a third grader at MWJDS, and Betzalel, a pre-kindergartener at Temple Israel of Natick — whom they speak to at home only in Yiddish.

“We’re very happy to be part of this event and to be able to honor our teachers in this way,” said Shazeer. “As a teacher myself, I try to follow my Hebrew College teachers’ lead, to be authentically myself, and to value and encourage students who have come from different backgrounds and different perspectives — each with their own questions, challenges, and interactions with tradition.”

Richmond and Shazeer have both been connected to Hebrew College since high school, when they participated — separately — in Prozdor. They didn’t meet until Richmond, a Newton native, had graduated from Yale, and, deferring medical school, taken a gig as a student cantor of Temple Israel of Swampscott. As part of his role, he directed a teen klezmer band. Shazeer joined as the singer.

They started dating several years later, when Shazeer was a student at Goucher College in Maryland and Richmond was at cantorial school at the Jewish Theological Seminary in New York. Shazeer studied abroad in Israel when Richmond was there for his ordination program. After graduating, Shazeer joined Richmond in New York, where she studied Talmud and Jewish Law in the Scholars Circle Program at Drisha Institute for Jewish Education.

They moved back to Massachusetts in 2006, when Shazeer started her ordination program at the newly-founded Rabbinical School of Hebrew College. Richmond was hired as cantor at Temple Israel of Natick and joined Hebrew College as a part-time adjunct faculty member in the School of Jewish Music.

“Hebrew College seemed like an exciting place,” Shazeer said. “I liked the idea of being at a not-particularly-denominational school, and having that added perspective of being with people who have pretty different perspectives and being in an environment where everything has to be challenged and considered from different sides.”

Richmond, who attended Solomon Schechter Day School of Greater Boston and Newton South High School, said he always loved Jewish life and learning, and was very involved in the Temple Emanuel choirs as a child, and so it felt like a “natural fit” to teach and lead a congregation in prayer.

Over the years, however, he also found that he loved filling in for his rabbi — especially the opportunity to say something meaningful about each week’s Torah portion and to officiate at major life events. He decided to return to rabbinical school at Hebrew College.

“I had it in the back of my mind to study and get smicha as a rabbi for many years, so I’m using sabbatical time from Temple Israel creatively to do that,” he said. “It’s been amazing to be at Hebrew College this past year and to study with such amazing teachers and to be immersed in torah and Talmud study and to learn so much from my havrutot along the way.”

During Rabbinical School, Shazeer founded the Jewish Birth Network, an organization to help emerging Jewish families connect with community and tradition. She has been teaching Judaic Studies and music classes at MetroWest Jewish Day school since 2012, as well as leading and facilitating Temple Israel of Natick’s youth services on Shabbat and holidays, and also recently decided to return to Hebrew College — to pursue a masters degree in Jewish studies with a specialization in special education. She will graduate in 2021.

And, throughout their lives, Richmond and Shazeer have continued to compose and perform klezmer and Jewish music — through “Fish Street Klezmer” — their duet — and now, along with their three boys. In 2015, Richmond was chosen by the Jewish Daily Forward as one of 21 Jewish Voices That Move Us, as part of their “Soundtrack of Our Spirit” series.

Their oldest son, Zalmen, first performed with them in a concert when he was two years old, and he sang the last word of each line in Yidl mitn Fidl. Zalmen and Velvel also sang at the Hebrew College Purim celebrations during Shazeer’s time in rabbinical school. Since then, they’ve performed as a family each year at “Yiddish Week,” as well as at nursing homes and assisted living facilities. The boys sing in the Temple Israel of Natick youth choir, which Shazeer directs, and Zalmen recently started singing with HaZaPrep, the junior division of Hazamir, an international Jewish Youth Choir. Zalmen also plays violin and Velvel plays trombone.

“We’ve been singing with our kids all their lives. The boys sing a lot with us at home, especially on shabbat and holidays, and at shul, also especially on shabbat and holidays, and they have started to add their own harmonies,” Richmond said. “Both Zalmen and Velvel spent a lot of time at Hebrew College during their first few months, and we like to think that they soaked up some of the atmosphere of the beit midrash.”

Their passion for klezmer music has also inspired them to speak to their kids in Yiddish, a language that Shazeer heard growing up — from father and grandparents, and Richmond heard mostly in the punchlines of his grandparents’ jokes. They both began learning Yiddish through singing in Yiddish, and later took classes, first in Jerusalem, and then in an intensive immersive summer program at YIVO Institute for Jewish Research in New York — but neither spoke regularly until their oldest son was 7-weeks-old.

“It’s been a really fun kind of wacky family experiment of having a Yiddish-speaking household,” Richmond said. “The Yiddish language and heritage and Jewish music are treasures that have been passed down from generation to generation. We’re trying to pass it onto our kids, as well. We’re glad they enjoy both the language and the music. It’s a real treat that we can share this as a family.”

Purchase tickets, and/or make a gift in honor of a treasured teacher for Hebrew College’s spring fundraiser Hebrew College Live! Stories in Honor of Our Teachers.